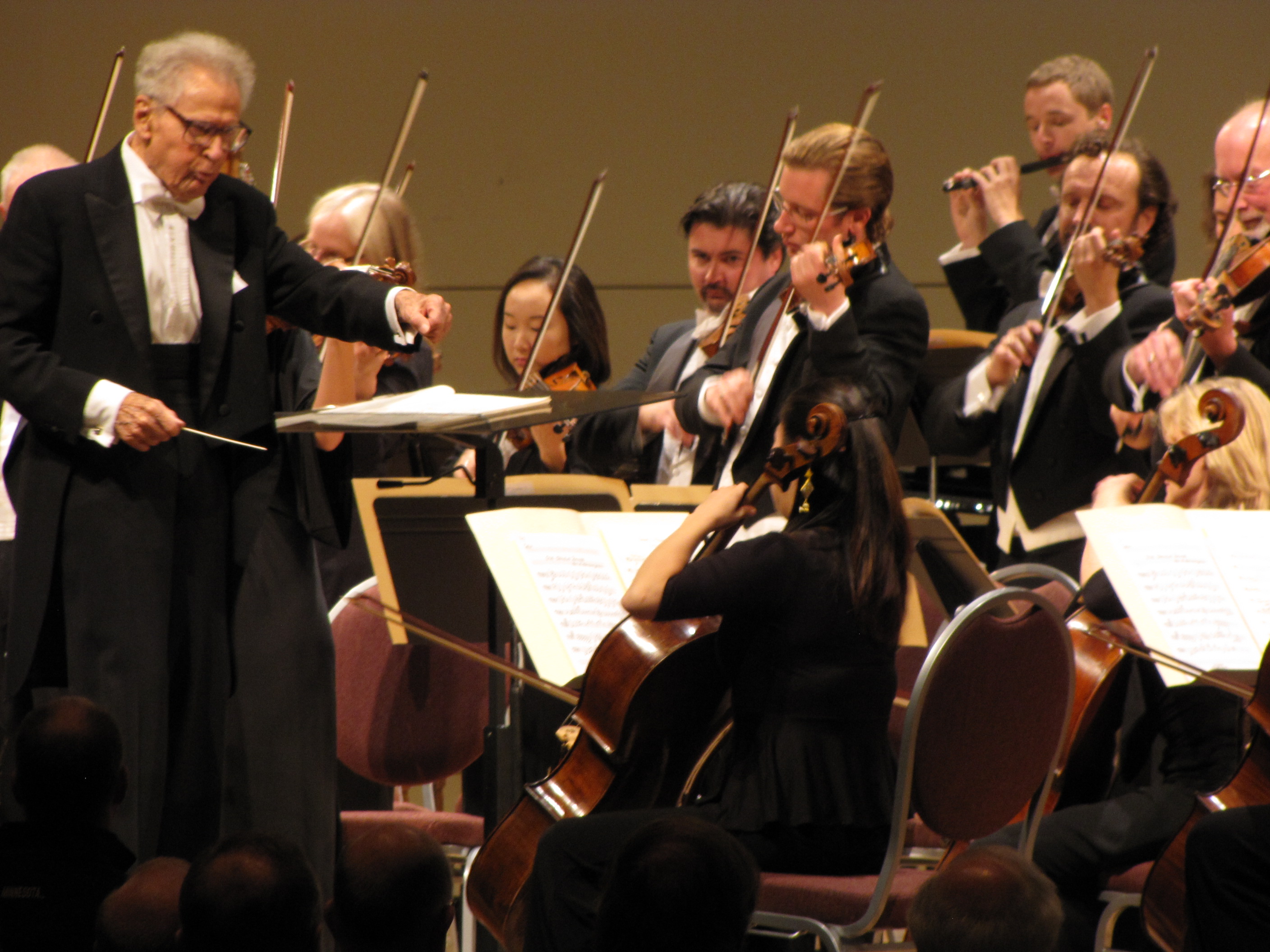 A concert by locked-out musicians of the Minnesota Orchestra

In 2010, The New Yorker magazine critic Alex Ross lauded the Minnesota Orchestra as “the greatest orchestra in the world.” The orchestra, founded 110 years ago as the Minneapolis Symphony, tours nationally and internationally, and issues critically-acclaimed recordings of symphonic works.

The management of the orchestra, however, October 1 locked out its 95 musicians when they failed to ratify a proposed contract. The proposal included pay cuts of 30-50 percent in musicians’ salaries. The proposed contract also included more than 250 changes to the musicians’ current agreement, gutting 40 years of worker protections gained through collective bargaining.

The musicians, members of the Twin Cities Musicians Union Local 30-73, were ready to continue working and performing while contract issues were resolved.

In a letter to the Star Tribune published October 6, they wrote:

“As former music directors of the Minnesota Orchestra, we came to the state because we believe that it wants and deserves to have a world-class orchestra.

“We are proud of the cultural gem we have built, with the musicians, for more than half a century. It required long and careful work to assemble a championship team, person by person, always building on a vision of superb music-making.

“This legacy can be swiftly destroyed, a tragedy not only for lovers of great music, but for the cultural soul and significance of the region.

“An orchestra does not easily recover from such drastic cuts, if ever. We urge the Minnesota Orchestral Association to do everything in its power to preserve this longstanding jewel.”

Although the lock-out meant the cancellation of the fall season’s opening night, scheduled for October 18, the musicians were determined to play. Independent of management, they promoted and staged their own sold-out concert the same night with Stanislaw Skrowaczewski conducting.

A native of Ohio, Wendy Williams came to Minnesota in fall 1992 and has played 20 seasons with the Minnesota Orchestra. She plays second flute. After beginning piano lessons at age 6, she took up the flute at age 11. She earned three degrees from the University of Cincinnati College-Conservatory of Music and came to the Minnesota Orchestra with a decade of professional experience.

“From the beginning,” Williams said, discussing the contract dispute, “our perception has been a refusal to bargain in good faith by the other side.”

She noted that management recently adopted a new business model and changed the Minnesota Orchestral Association’s mission statement — even dropping presenting a “symphony orchestra” from the stated mission.

The sum of the proposed changes, Williams said, “will make it impossible to attract and retain the world-class musicians we have in the orchestra.”

She said the proposed changes mean the Minnesota Orchestra would go from being a “destination” orchestra for top musicians to a “regional orchestra, not a top-tier, leading world-class orchestra.”

Burt Hara grew up in Los Angeles and started playing clarinet age 10. “I started in a public elementary school winds program,” he noted. He won his first competition at age 13 and soloed with the Los Angeles Philharmonic at age 14. He earned his B.A. in music from the Curtis Institute of Music in Philadelphia.

Hara came to Minneapolis to join the Minnesota Orchestra 25 years ago. “It was a dream come true,” he shared. “I was 23 at the time. I won the job in what I considered a destination orchestra — I job I considered I would be in my whole career.”

“I love my life, I love my community, I love my neighbors, I love the orchestra,” Hara said. “Now, I would consider leaving… Had I known what is happening now, I would have taken other offers more seriously in the past three to five years.”

Hara serves on the musicians’ negotiating committee. “We’ve been at this for a long time and we don’t really understand [management’s] numbers,” he noted. “We get charts that are different from one meeting to the next…”

“I think there is a perception from our board or management that there is some kind of correction that is happening across the industry,” he said. Some symphony orchestras are folding, he noted, some are taking huge cuts. “The rhetoric all sounds the same,” he said. But, he added, some orchestras are maintaining the status quo.

“Here, they’re asking us for $5 million in savings from the musicians — per year,” Hara said. The 250 proposed contract changes, he added, “basically takes 40 years of contract negotiations and flushes it down the toilet.”

Contract language limits the number of rehearsals and concerts in a week, an important safeguard “to prevent injury and abuse,” he noted.

Catherine Schubilske grew up in Chicago and began playing violin at age 8, performing in youth symphonies. She earned her bachelor’s degree at the University of Cincinnati College-Conservatory of Music and a master’s degree at Indiana University. She has played 12 years with the Minnesota Orchestra.

Schubilske shared this story: “My dad was in the Teamsters union. He drove a milk truck for a dairy, delivering to stores. He had played violin as a child but there was no money for lessons during the Great Depression.” And, for her dad, college was “out of the question.”

Growing up, “we had a very simple lifestyle,” Schubilske said, but thanks to the security of her dad’s Teamsters contract, “my parents were able to afford what was important, like education and music.”

“I got to be the first one in the family to go to college,” she said. “I had a small Teamsters scholarship.”

With the lock-out, management not only cut off paychecks but also cancelled the musicians’ health insurance.

“I’m so proud to be part of this group” holding out for a good contract,” Schubilske said. “It gives us something to look forward to for our children.”

For more information from the union: