Since the story broke about the NSA domestic spying practices, debate among concerned citizens has revolved around the Big Brother surveillance model. Most of us shudder at the thought of our federal agencies from DC watching, noting, and recording our actions. However, there is another type of Internet surveillance that largely escapes notice and likewise threatens our liberty.

Both types of surveillance are perversely encouraged by a poorly regularly market that allows big corporations to profit from violating our privacy.

We have long known that our online habits are being recorded and combined with other personal data that allows companies to show us personalized ads. But Free Press recently offering a compelling explanation for how this model can harm us. From the Dana Floberg article:

Floberg goes on to describe how shopping sites alter prices based on income and location so more affluent shoppers can access better prices and coupons. These sites both use and reinforce stereotypes as they take advantage of the most vulnerable in our society.

Without laws to protect consumers, there is little we can do to stop this predatory behavior. Just as the market encourages corporations to violate our privacy to sell its goods, big corporations are also profiting in their work with law enforcement at all levels. 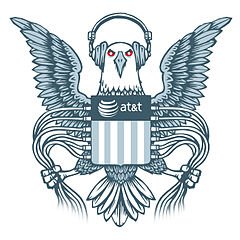 An AP article by Anne Flaherty notes that AT&T charges $325 to activate a wiretap and $10 per day to maintain it. Verizon charges the government $775 for the first month and $500 per month after that to continue it. It is hard to believe these charges are in line with actual costs.

Meanwhile, the other massive providers are undoubtedly aware of what allegedly happened when Qwest CEO Nacchio refused to help the NSA illegally spy on Americans – the NSA cancelled a lucrative contract with Qwest. This provides a major disincentive to follow the law, particularly when they can expect retroactive immunity after violating the law for years.

What would become of any provider who dared to say “no” to the NSA? We found out when Xmission, serving consumers via UTOPIA said “no” – absolutely nothing happened. No fearful complicity at local Xmission. Xmission is focused on serving its customers, not Wall Street.

Massive corporations collect information from millions of customers; the more data, the higher the value. Even if a municipal network tried to collect and sell private data, the opportunity to profit would be limited because their reach is localized.

Community owned networks, whose focus is on serving the community rather than maximizing profit, have no reason to collect and sell data. In fact, it is a revenue source to avoid. With a local customer base and more accountability, selling data would violate the trust that gives their brand a competitive edge. When it comes to protecting privacy, supporting smaller scale providers that are rooted in the community is a far better protection than anything Washington, DC, can or will provide.