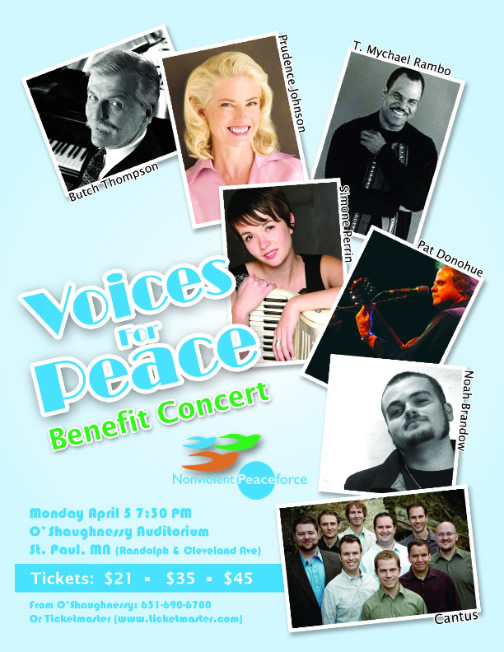 “It’s not just [about] the money.” This is not the phrase that one would expect to hear to describe a fundraising event, but Ann Warner of Nonviolent Peaceforce means it sincerely. “We have this important international organization right in our midst. … We’ve got to bring that out in a better fashion.”

With one of their main offices located in Minneapolis and the other in Brussels, Belgium, Nonviolent Peaceforce is both local and international.  But despite having local roots, said Warner, the organization is not well known in the Twin Cities. “Voices for Peace,” their fourth annual fundraising event, is an attempt to remedy that situation.


Once in the field, peacekeepers work with local groups and stakeholders to facilitate communication and build trust, so that people living in these areas can solve conflicts peacefully. An international and strictly nonpartisan stance sets the organization apart: peacekeeping teams are made up of individuals from around the world, do not represent a single nation or religious group, and do not enter an area with a specific agenda.

As an example, Webb explained how Nonviolent Peaceforce worked with mothers in Sri Lanka, whose children had been taken and forced to serve as child soldiers. These women, often coming from isolated, poor, Tamil minority communities, were hesitant to approach local Sinhalese government authorities or security forces. With the support of Nonviolent Peaceforce fieldworkers, the mothers gained the communication skills and confidence to file official reports with area police.

Webb also suggested that in some cases, Nonviolent Peaceforce’s presence while accompanying the mothers to the police station helped encourage the authorities to take the women’s concerns seriously. Over time, the Sri Lankan government introduced its own programs to address the issues related to child soldiers.

It is difficult to say why Nonviolent Peaceforce is not more of a household name in its hometown. Warner suggested that perhaps the organization’s broad international scope makes it hard to understand. She hopes that the upcoming benefit concert will both increase awareness and understanding about Nonviolent Peaceforce and what it does.

Prudence Johnson, one of this year’s featured performers, was herself not aware of Nonviolent Peaceforce until last year, when she was invited to participate in the 2009 event. When she learned more about the organization and its mission, however, she readily agreed to perform. “[You] just can’t say no to that,” she said. Johnson described last year’s fundraiser as a “really moving experience,” and stated, “Everyone who was involved was really inspiring.”

It comes as no surprise, then, that Johnson is returning this year. The benefit will focus primarily on the music, differing from Nonviolent Peaceforce’s previous fundraising events. The performers will not necessarily play individual sets in straight succession. Instead, said Johnson, “We’ll be supporting each other on stage.”