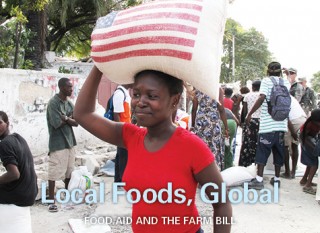 The U.S. food aid program is hugely important at the global level. At $2.3 billion in 2010, the U.S. provides just over half of emergency food aid deliveries to millions of beneficiaries around the world suffering from famine, natural disaster and conflict.1 There is little doubt that food aid has saved countless lives, but with significant improvements, it could save countless more.

Click here to download this document. To find out more about the Farm Bill and to read our full What’s at Stake? series, go to farmbill2012.org.

In the short run, when crops fail or catastrophe strikes, food aid is an essential last resort to help people make it through to the next planting season. Food aid itself, though, is just one of many tools for reducing hunger. In the long run, programs to prevent food shortages and increase rural incomes are even more important.

Food aid programs in the United States are administered by the U.S. Department of Agriculture (USDA) and U.S. Agency for International Development (USAID), either as part of bilateral programs or through the U.N.’s World Food Program. For the most part, the rules and spending limits for U.S. food aid programs are set under Title III of the Farm Bill (Agricultural Trade and Food Aid). USAID’s international disaster assistance program (which is set separately under the State Department authorization bill) has expanded in the last few years, but decisions on nearly 90 percent of food aid spending are still set under the Farm Bill.

Unlike other donor countries, the U.S. ships most of its food aid as in-kind donations sent around the globe rather than local purchases from farmers in the country or region in need. While there is a perception that these donations support American farmers, in fact the volume of food aid purchases are too small to affect farm prices. Food aid is purchased by U.S. agribusinesses, transported by American shippers, and delivered by U.S. NGOs or U.N. agencies. By law, at least 75 percent of our food donations must be purchased, processed and transported by American companies.2 Shipping food from the United States to countries in crisis costs much more than purchasing food locally. For example, shipping food aid to sub-Saharan Africa costs 35 percent more than local food purchases.3 Most of the money we spend doesn’t even go to food purchase—a full 65 percent of our food aid budget is consumed by shipping costs.4 Furthermore, food shipped from the United States takes two to three months longer to arrive than food purchased regionally.5 For people facing a famine or other crisis, additional waiting time for a food delivery can be a matter of life or death.

In the 2008 Farm Bill, Congress authorized a four-year, $60 million pilot program for local and regional purchases of food aid. An initial survey of some of the results from the test cases found that the average cost of providing grains was 54 percent lower, and the delivery time was cut 62 percent (nearly 14 weeks).6 USAID has also expanded local and regional purchases even more through separate funds set aside for disaster assistance. These innovations, which include food vouchers, could strengthen local markets and should inform the broader programs authorized under the Farm Bill.

The 2008 Farm Bill also expanded programs to pre-position food aid in six locations around the world (Kenya, Sri Lanka, South Africa, Togo, Djibouti and San Jacinto, Texas). This is still in-kind aid, but it is shipped and stored in warehouses much closer to the location of food emergencies. This could cut the time needed to deliver food aid to recipient countries from several months to several weeks.7

These modest improvements are encouraging, but much more could be done to make food aid more efficient in terms of cost, and more effective at reducing hunger. This is especially important in the current era of tight budgets, increasing demand for grains and continued food shortages around the world

Food aid is an essential last resort in times of crisis, but it is imperative that all U.S. aid support developing countries to become self-reliant by investing in local agriculture. Strengthening the production capacity, infrastructure and markets for farmers at the local level will allow for long-term food security in developing countries while also providing more options for fast and cost-effective local purchase of food aid when regional food crises arise.

With the continuing global economic downturn, and rising rates of global hunger, we need to get the most out of every dollar spent on foreign aid. Reforming the food aid system would make it more effective while empowering farmers in the developing world. The Farm Bill debate provides an important opportunity for a comprehensive review of existing food aid programs and the enactment of new programs that respond to new realities.

Many of the arguments for increasing local and regional purchases of food aid and decreasing monetization have been debated for years. The issue is not a lack of knowledge but insufficient political will for a different kind of food aid and agricultural development that helps to rebuild local food systems. Fears that criticism of food aid will lead to its elimination have held back change in previous farm bills and in debates at the World Trade Organization. Similar reforms in Canada gained ground when Canadian farmers got behind a shift to local and regional purchases. Perhaps it’s time for a new debate, within the Farm Bill and beyond, on how to support strong and resilient food systems in the U.S. and in developing countries, and how aid programs can support that goal.

1. Government Accountability Office: Funding Development Projects through the Purchase, Shipment and Sale of U.S. Commodities Is Inefficient and Can Cause Adverse Market Impacts, GAO-11-636, June 2011.

2. A program restriction of the Food for Peace Program (formally Public Law 480): http://www.fas.usda.gov/excredits/FoodAid/Title%201/pl480ofst.html.