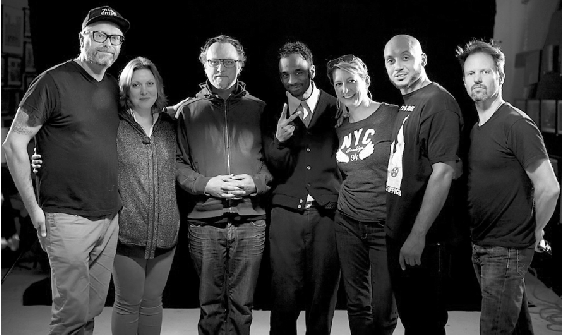 In the wake of the killing of Michael Brown in Ferguson, Mo., filmmaker Mark Wojahn wanted to bring more attention to racial profiling and police brutality on a local level so he teamed up with rapper Muja Messiah to direct a video for Messiah’s song “It Goes Down,” off his new album, “God Kissed It, the Devil Missed It.”

“This is about positive change,” said Wojahn. “We’re doing this to help change the world. I know it’s a small thing, but I really believe each of us needs to play our part.”

Wojahn and Messiah worked together six years ago and Wojahn said when he saw a link to the song “It Goes Down” online, one thing led to another. “I just really wanted to be active. I wanted to participate in the discussion somehow,” said Wojahn. He said everyone involved in the project felt the same, which is why the video was able to be made with no budget.

“This potent track is augmented by many disturbing images of police brutality, which gives the talented local MC’s fiery lyrics some added weight and significance, while also clearly highlighting the abuse of power that has permeated our society,” said City Pages’ Erik Thompson.

“I don’t think we’re singling out that all cops are the perpetrators here,” said Wojahn. “But there are some situations when we need to look at the situation and say, ‘is there profiling going on here and is that justified?’”

Messiah, who has been rapping since he was 11, said his song reflects his personal experience. “I’ve been dealing with it all my life,” he said. Growing up in Brooklyn Park Messiah said he remembers police coming to his school, talking to students and handing out football cards. “They were my heroes,” he said.

Then when he was about 10, he said, some police called Messiah and his friends ‘girls’ and laughed about it. “By the time we were 12 or 13 they knew all our names. They gave us a hard time. They knew stuff about us they didn’t have any business knowing…I think they’re still out there busting heads and doing their dirty work.”

Messiah said he’s written many songs about police and violence, which he described as an American tradition. And while he said he doesn’t personally have hope that much will change, “it’s not to say anyone else shouldn’t,” and, he said he has empathy for perpetrators and the victims. “You have to have empathy and be sympathetic to all people who are facing oppression. Whether it’s different sexes or races.”

He said he thinks people who don’t believe racial profiling is a problem have been oppressed, themselves, “by the media, their own prejudices and American history itself.” He said he thinks music can shed a light on what’s happening. “I’m always trying to strike a nerve.”

Messiah and Wojahn both have a history of social and political themes in their work. In Wojahn’s 2003 documentary “From Sea to Shining Sea,” he traveled across the county by train to interview 500 people and ask the question “What do you think America needs?” Messiah and Wojahn worked on the video “The Patriot Act” together in 2008.

Wojahn said political art and artists are intertwined. “There are some of us who are interested in current events who want to utilize our skills in that way.” While many people may not go to the venues where Messiah performs, he said, they are able to see and share the video from their desks or phones. “It puts a spotlight on what’s relevant.”

“It Goes Down” features I Self Devine and was produced by Mike the Martyr. The video can be viewed on Wojahn’s YouTube page at www.youtube.com/user/wojphoto/videos.

“Art doesn’t always have to be on the gallery walls. It exists everywhere and in many forms,” said Wojahn. “This month, the art I made was a collaboration with musicians and a film crew.”

Minneapolis police spokesperson John Elder did not respond to a request to comment for this article in time for publication.