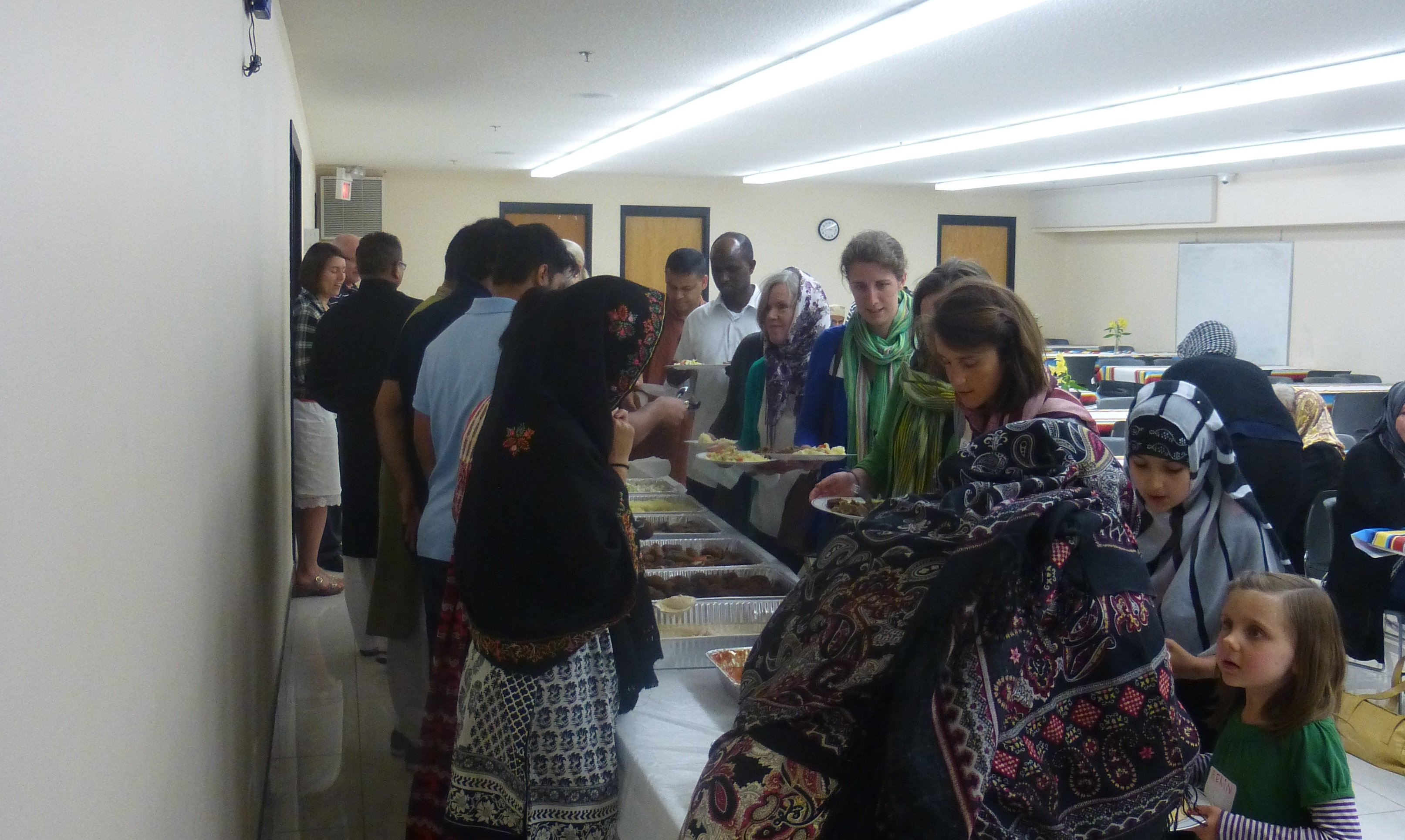 (Photo by Ellen Squires) Participants line up to eat from the Iftar buffet at the end of the program.

Ikram Al Huq is short, but it is not his height that bothers him.

Al Huq is the interfaith and religious coordinator of Bloomington’s Ar Rahman Muslim Community Center, one of 55 such centers in the state. The mosque is growing, and so is the Twin Cities Muslim community. But Al Huq is concerned that Minnesotans still don’t take the time to know their Muslim neighbors.

The Muslim Community Center is a participating site in Taking Heart, a program that seeks to introduce people to their Muslim neighbors and begin building bridges across faith communities. Sponsored jointly by the Minnesota Council of Churches (MCC) and the Muslim American Society of Minnesota (MASMN), Taking Heart promotes interfaith understanding by hosting social gatherings.

The program began in 2004, when MASMN reached out to MCC after noticing increasing levels of hate speech and Islamophobia. “The vision is increased tolerance, understanding, and cooperation among Muslims and non-Muslims,” said Minnesota Council of Churches program director Kim Olstad.

Taking Heart events take place at a fitting time—Ramadan, described by Olstad as “a natural time of gathering and hospitality” in the Muslim community. Throughout the holy month, participating metro-area mosques open their doors for community Iftar dinners. Marking the end of the daytime fast, the dinners occur at sunset and are a time of feasting and fellowship. Organizers hope that this fellowship will spur conversation and build relationships between attendees of all faiths.

“We hope that when participants interact with people of a different faith over food and small talk, the issue will be demystified,” said Asad Zaman, Executive Director of MASMN. “It is easier to fear or hate a faceless person.”

The dinners begin with an hour of education, during which basic Islamic principals are introduced and the floor is opened for dialogue. Attendee questions at the Ar Rahman Iftar dinner range from the differences between Sunnis and Shiites to women’s rights to beliefs in the afterlife. At sunset, the fast is broken with dates and water, then the call to prayer sounds and the Muslim attendees offer the Maghrib prayer. After prayer, the feasting begins with heaping platters of falafel, gyros, pita and sweet pastries, all prepared by members of the mosque.

The community building that Taking Heart promotes builds on the spirit of Ramadan. “Especially during this time, it is a blessing for us to be with friends and neighbors,” Al Huq said.

“It was really humbling to be invited to something so important and to be welcomed into the community,” said participant Nikki Stennes, of Minneapolis. “I liked being able to get a more anecdotal sense of what Ramadan is; to get an understanding of how it’s actually practiced is a more impactful way to learn about it.”

Zaman said reactions like Stennes’ are not uncommon and many participants report that the experience often changes the participant’s perceptions of Muslims.

The 19 Taking Heart dinners hosted around the metro this year were attended by 550 people. Olstad hopes that these numbers will continue to grow. “When we take the time to see through someone else’s eyes, to hear about their challenges and hopes,” she said, “it helps us to put our own challenges and hopes into perspective.”