There are ground-up stirrings all across America, from Seattle-Tacoma to New Jersey and Washington, D.C., to bring compensation for workers up to something approaching a “living wage.” 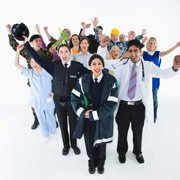 Dayton’s Bluff, a neighborhood on St. Paul’s East Side, is right in the middle of these efforts, geographically, but is more like ground zero for Minnesota neighborhood activists who are trying to create livable, sustainable communities.

The Dayton’s Bluff Community Council on May 20 adopted a resolution that encourages larger businesses to pay workers what are widely being called “living wages,” or compensation packages that nonprofit organizations and government agencies can determine through cost-of-living calculators.

There is no legal weight behind the resolution, said Deanna Foster, executive director of the community council. Rather, she said, it is a way to engage business leaders and others in discussions on how to “invest in the neighborhood to make it a good place to live, work and do business.”

Earlier, in announcing the council’s action, Foster said the council’s Equity Committee generated the idea “because it wanted to implement both the council’s equity principles and the city of St. Paul’s commitment to diversity and inclusion.

“Dayton’s Bluff is recovering from a lengthy period of underemployment and we want to encourage employers in our neighborhood to consider themselves partners in the recovery,” she said.

That is a straightforward, close to home local action by people trying to improve and grow their community. It comes after lawmakers at both the state and federal levels have failed to adjust minimum wage laws (which are set even lower than living wages) to reflect cost of living increases and as compensation for workers throughout commerce and industry have experienced a steady erosion of household incomes and purchasing power.

Macalester College historian Peter Rachleff, a Dayton’s Bluff resident and member of the council’s Equity Committee, described the council’s resolution as “a small step, to be sure, but a real step. We hope to circulate this to St. Paul’s other 13 neighborhood councils and work from the ground up.”

In March of this year, the Jobs Now Coalition research group calculated that both working parents in a Minnesota family of four would need to earn $14.03 an hour to meet basic needs. The median wage for part-time jobs at that point was only $9.95 an hour in the Twin Cities metro area, and $9.41 an hour statewide.

Similar inequities between compensation and living costs are triggering ground up actions all across the nation. Some areas realize living wage standards are a long way off and are instead working to at least increase the minimum wage.

South Dakota, an impoverished state by most measures, currently has unions and other groups circulating petitions to place a boost in the state’s minimum wage on the 2014 ballot. The Sioux Falls Argus Leader reported on July 17 the initiative would raise South Dakota’s current $7.25 hourly minimum to $8.50.

That represents a modest increase for the working poor. Jillian Berman, writing for the Huffington Post cited Wider Opportunities for Women (WOW) calculations showing a person would need to make $10.20 an hour to meet basic needs in Hanson County, S.D., which statistics show to be the least costly place to live in America.

South Dakota’s current minimum wage rate is at the federal level. Minnesota is among five states that have lower minimum rates allowable at some smaller businesses than federal law requires. Eighteen states have set state minimum wage rates higher than the federal rate. Various cities and local metro areas have established their own minimum rates at higher levels and state and federal law to reflect local living costs.

San Francisco established its city minimum wage in 2004 and allow for annual adjustments for inflation. Seattle-Tacoma is currently considering a metro minimum wage for certain industries, while Washington, D.C. is in a battle with Wal-Mart over a “living wage” requirement the city intends to impose on so-called “big box” stores.

Real Change News reported 120 cities have ordinances instructing living wages for certain types of industries and for contracted work performed for the cities. Both Minneapolis and St. Paul have what Rachleff calls “ineffective” living wage ordinances.

What Dayton’s Bluff is proposing isn’t ahead of the curve by national efforts, but it has become a ground-up leader in Minnesota.

Rachleff said the Equity Committee’s goals are to “educate our community about the relationship between employment conditions and economic health of our community; educate employers about the standards and values held in our community; reach other neighborhoods to encourage similar action, leading, some of us hope, to more effective action by the city and state governments in the years ahead.”

Foster and Rachleff said they are aware of work by the Minnesota Jobs Now Coalition and other groups to promote living wage laws and ordinances, and what other communities are doing around the country. A driving force for action in Dayton’s Bluff, however, comes from a planned development on St. Paul’s East Seventh Street that can be a major jobs generator and, what they call, “an investment in community.”