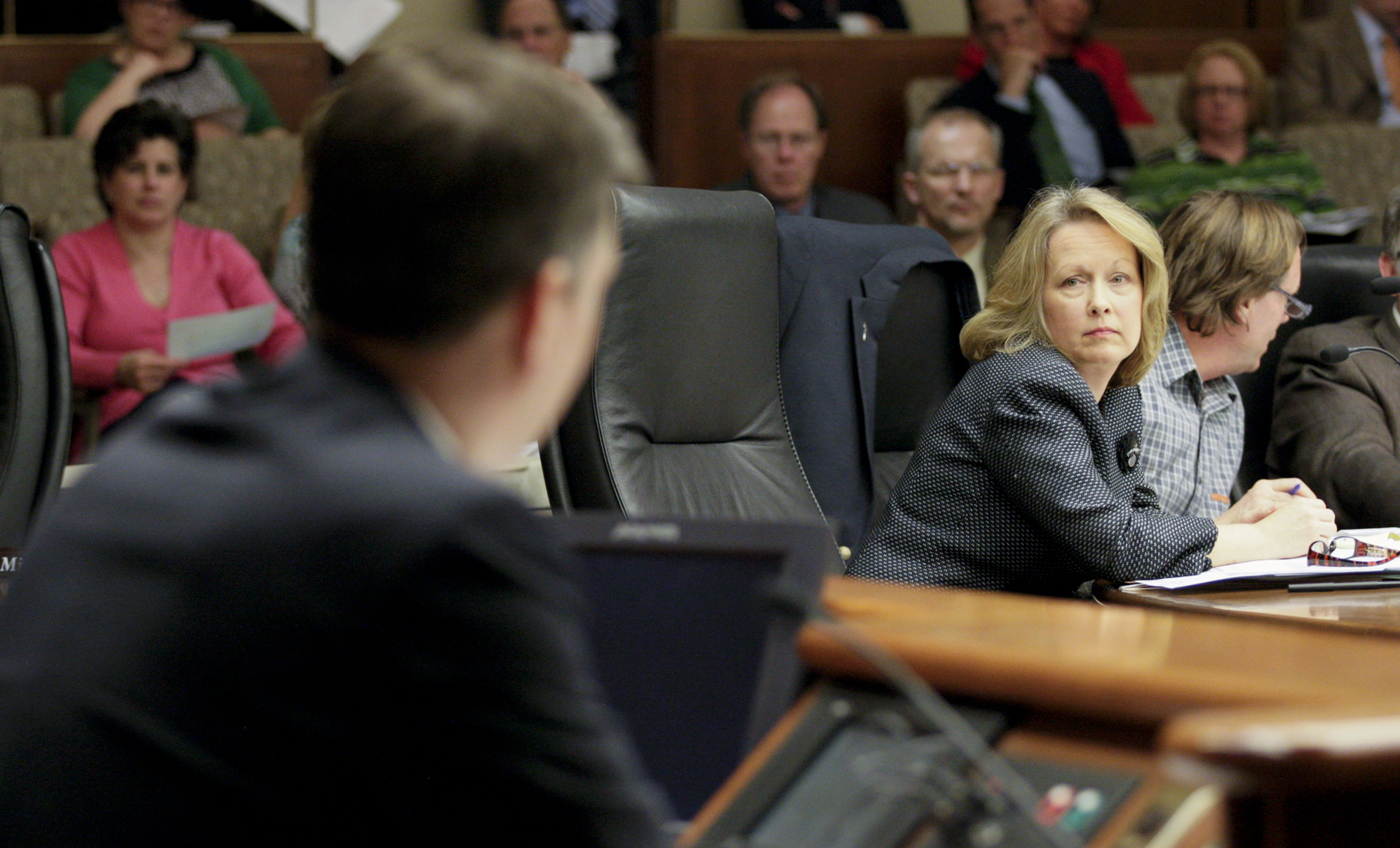 Rep. Jenifer Loon listens to a response from Rep. Ryan Winkler, left, to her question during debate in the House Ways and Means Committee April 29 on his bill, HF92, which would raise the state’s minimum wage. (Photo by Paul Battaglia)

An amendment adopted by the House Ways and Means Committee stirred up new debate to the already controversial minimum wage bill, giving House Republicans more reasons for opposing it as the bill heads to the House Floor.

As amended on Monday, HF92, sponsored by Rep. Ryan Winkler (DFL-Golden Valley), now incorporates HF763, a bill sponsored by Rep. Jason Metsa (DFL-Virginia), which would double a new parent’s eligibility for unpaid leave time from six to 12 weeks, and reduce the regular workweek from 48 to 40 hours before overtime kicks in.

More than 30 states impose a 40-hour workweek. Rep. Matt Dean (R-Dellwood) said the Metsa provisions deserve their own hearing in the House Agriculture Policy Committee because farmers would be significantly impacted by limiting workweeks to 40 hours. Weather delays could lead to 24-hour operations for planting some fields, he said.

“The process here is incorrect,” Dean said, “This is kind of a shotgun wedding here in ways and means. Rep. (Lyndon) Carlson (Sr., the committee chair,) says if there’s anybody here who thinks these two should not be wed at this time, raise your hand. And, well, you’re seeing a bunch of hands. That’s what happens when we do the process this way,” Dean said.

The committee approved the bill, as amended, and referred it to the House Floor. Sen. Chris Eaton (DFL-Brooklyn Center) sponsors SF3, a companion that awaits action by the full Senate. It does not contain the recently added provisions.

Besides agriculture, the long-term care industry could also be significantly affected, according to Rep. Jim Abeler (R-Anoka). The state sets the Medicaid reimbursement rates and prohibits the raising of rates on private payers because of equal rate policies.

“In the long-term care side there is no more pot of money to go to pay these people,” Abeler said. “Here’s this big amendment that takes a minimum wage bill to kind of a workplace reform bill to make it tough on small business.”

He also opposed the family leave expansion from six to 12 weeks. “It’s not a petty matter for small business. It’s not like you have someone who can just go fill in. It’s a huge gap. What you’re going to provoke here is people even deciding whether they’re going to hire women of child bearing age or not.”

Rep. Tim Mahoney (DFL-St. Paul) said the provisions help families, who still would be paid less than the $13 an hour living wage. The additional benefits could serve to attract more workers to jobs that support families with longer leave time, higher wages and “eight hours to rest, eight hours to work and eight hours of family time” per day.

The amendment also changed the proposed minimum wage increases. As revised, large employers would be required to pay a minimum wage of:

Small employers — those whose annual gross sales volume is less than $500,000 — would be required to pay a minimum of:

Minimums for paying employees under age 20 during their first 90 days would begin at $6.96 per hour, and increase yearly to $7.48 and $7.93 per hour respectively.

Of the 1.5 million hourly paid workers in the state, about 93,000 earn less than $7.25, according to statistics from the Department of Labor and Industry.

“There are not many other legislators up here that work as hard as I do to create businesses in this state, but when we have a difficult time raising the wages of the lowest paid people in this state, and we’re not even raising this wage to a living wage, I am shocked. I just have a very difficult time with the idea that we can’t help over half the workers in this state,” said Mahoney, chair of the House Jobs and Economic Development Finance and Policy Committee. “We are just giving them a few more vegetables on the table.”

There is a myth that these are jobs for teenagers when in reality they are jobs used by adults to support families and many work multiple part-time jobs without benefits, Winkler added.