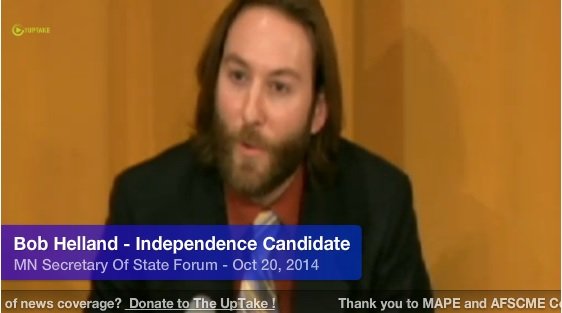 Rep. Michele Bachmann (R) has decided to retire from congress after barely winning her last election against DFL candidate Jim Graves. So you might think this race would attract media attention. It isn’t. Graves wasn’t popular so much as Bachmann had grown unpopular. Her failed 2010 presidential bid, where she emphasized her Iowa roots, may have been part of the reason. A bigger reason may be her constant exposure on Fox News as a spokesperson for the Tea Party. Minnesota’s sixth congressional district is conservative, but even it has its limits.

Scroll down for recorded video of the debate.

Enter former state Rep. Tom Emmer, who has name recognition thanks to his failed run for governor in 2010. He easily captured the Republican party endorsement and won the August primary. His Democratic challenger is Sartell Mayor Joe Perske. Given Emmer’s name recognition and the conservative bent of this district (it only elected one Democrat to Minnesota’s legislature in 2012), most pundits have written this race off as a GOP victory.

However, Emmer is known to say outrageous things. His comments about waiters making $100,000 a year with tips triggered a popular backlash that probably tipped the scales against him in the close three-way race for governor in 2010. Democrats will be hoping for a repeat performance when he debates Perske at high noon in St. Cloud on Oct. 21 in a St. Cloud Area Chamber of Commerce event.