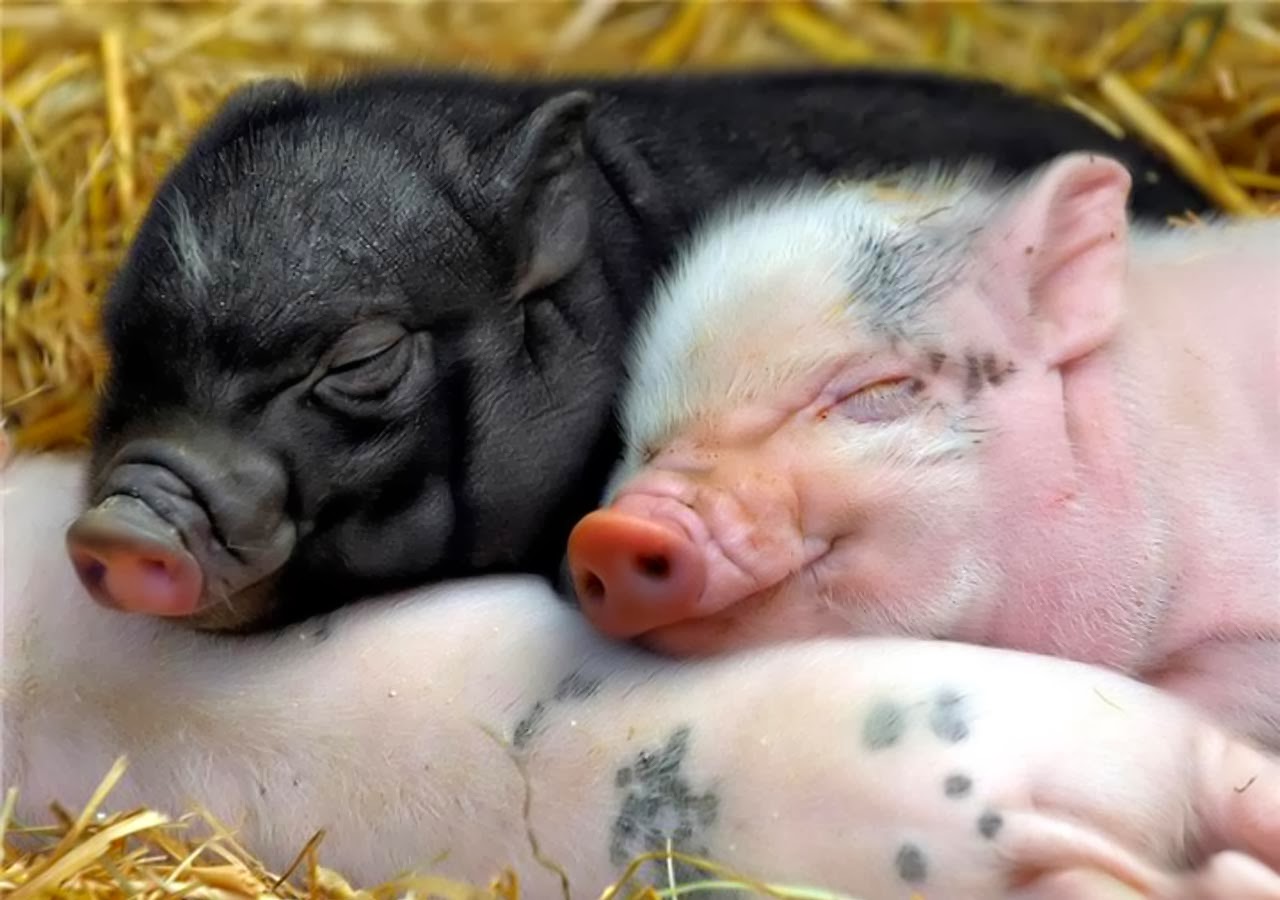 There is a photo somewhere in which I am about six and wearing a teal fake fur winter coat. We are gorgeous, that coat and me. I am holding a pinkish white baby pig close to my chest, cradling and squishing it like a beloved baby doll.

Have you ever seen a baby pig? They are so cute it makes you want to hoard baby pigs.

Sadly, sweet little piggies grow to become enormous and stubborn and smelly and cannot be re-directed were you to, say, hit them over the snout with a 2 x 4 as my dad once discovered. It’s not unlike raising a teen I am told though I don’t know much about that yet. It took a few years but soon enough after that innocent moment was captured on film, pigs began to lose their charm. They became a big and disgusting deal in my life because they became work. I used to have to help my dad vaccinate pigs. What this meant to my preteen self was that I would fetch the meds out of a second-hand refrigerator located in the mud room. Often sitting next to all sorts of animal pharmaceuticals, you could also find various Coke bottles and Rubbermaid cups filled with either plain Coke or whiskey and Coke (you know, should anyone need an instant afternoon nip to carry you through the day). I once took a swig out of the wrong cup on a mad dash for animal meds and that was the end of my afternoon Coke nips. But no matter what I drank, I always ended up traipsing out to the farrowing house, a place designated for sows (large and very pregnant pigs) and later their litters. New babes were treated to some shots.

Dad had a system I never quite got. I only knew I had to move fast. Grab the baby pig by the right hind leg, hold it upside down while dangling it long and still enough for him to stab a needle into the soft place between it’s back haunch and leg. There would be quick swipe of iodine to mark and disinfect the entry spot and then he would quickly squeeze the syringe, the pigs would squeal, and then I would drop it into the pen designated for vaccinated pigs.

Have you ever held a pig upside down by it’s right leg? Most likely the answer is NO. But if so, you know that frightened squealing pigs pee. The pee runs down your arm and I probably don’t need to say that I didn’t like doing this, but I DID NOT LIKE DOING THIS. Warm pig urine running into each layer of winter gear that left me with one wet arm which always felt colder than the rest of me, the pungent eau de porcine (created by piles of steaming pig manure), incessant rutting and squealing noises, and the stuffy and moist environment made for such an assault to the senses that I felt physically ill.

Some people head to Disney for sensory overload, but I went to a farrowing house.

In the past few years, my friends and I have talked a lot about how our childhood lives differ so much from that of our our kids’. We worry a bit about what they view as ‘work’. Some like to toss out that kids these days are lazy, but I don’t really blame kids. Our whole world seems to be lazy. Breakthrough technology is built on the premise of doing something faster and easier and it takes a lot of creativity by parents to create environments where there is no easy way out. There are not many places left where the touch of a button or the swipe of a key board won’t make something a quicker and less daunting task. It seems we have to be aggressive in our quest for physical and mental challenges . In many cases, we have to steer our kids toward these things because they are no longer a requirement for daily life as they used to be.

If my kids never hold a peeing pig it’s fine by me, but I do want them to do some shitty (pun intended) work. I want them to do work that will make them gag (or at least feel uncomfortable) so they learn how to push through unpleasant tasks as well as appreciate the work and all those who do it.

As usual I don’t have any answers, but I am thinking about my kids and that little girl who loved and then hated those baby pigs. She left and has been gone a long time, but she has not forgotten what being uncomfortable felt like and perhaps that is the most important part for now….that she remembers.