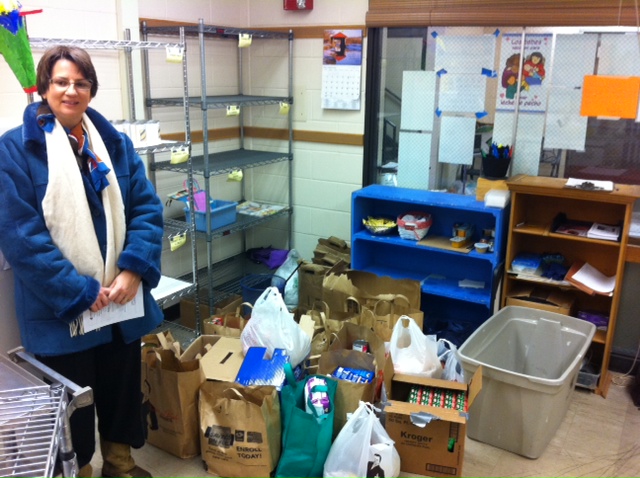 When the 4-H club arrived with a food donation, the shelves were bare. (Photo courtesy of Beth Breiter)

It was the Monday after Thanksgiving and the Little Kitchen Food Shelf in Northeast Minneapolis was closed.

“We ran out of food,” Jennifer Schultz, manager of the Little Kitchen Food Shelf said.

She added that it was temporary and they would be open again on Tuesday when they would have a supply of food.

The Little Kitchen food shelf is in a tough place right now and as we talked it became apparent that closing the food shelf occasionally would most likely happen again in the future.

Schultz explained that over the past year and a half, Little Kitchen has seen a 300 percent increase in the numbers of people served. They budgeted usage at 600 individuals per month but the actual number is closer to 800, going up to that level at the first of the year and staying consistent throughout 2012.

The Little Kitchen Food Shelf is a no restrictions, no boundaries food shelf in Northeast Minneapolis serving all people. One hundred percent of the monetary donations go into food and supplies.

What makes them different from other food shelves is that Little Kitchen does not require proof of address or identification for adults or children. They also do not restrict use based on geographic locations.

They are also one of the few food shelves where clients can get baby formula.

“We get referrals from United Way 211 specifically for people who are in an emergency situation,” Schultz said. “We’re seeing a lot of first time clients.” Schultz estimates that between 50—75 percent are new food shelf visitors each month; most come from Northeast Minneapolis within two miles of the food shelf.

Schultz describes lower Northeast as a “food desert” when it comes to affordable grocery stores.

“Our busiest shift is on Tuesday night between 6-7:30 pm because so many people have day jobs and they need to come after 5. It’s not like these people aren’t working. Everybody is essentially on an individual track of trying to make ends meet and there really isn’t any guarantee they’ll be able to afford all the things they need.”

Little Kitchen is run through the Northeast Community Lutheran Church and is completely volunteer-run, with no paid staff. The only expenses come from their sole food supplier the Emergency Food Network (EFN).

To buy food from the EFN the Little Kitchen has to follow certain rules. When people are served at the food shelf they follow the Emergency Food Shelf guidelines of distributing a minimum 15 pounds of food per adult household member per month. Another rule is that the food shelf must be open eight hours per week. 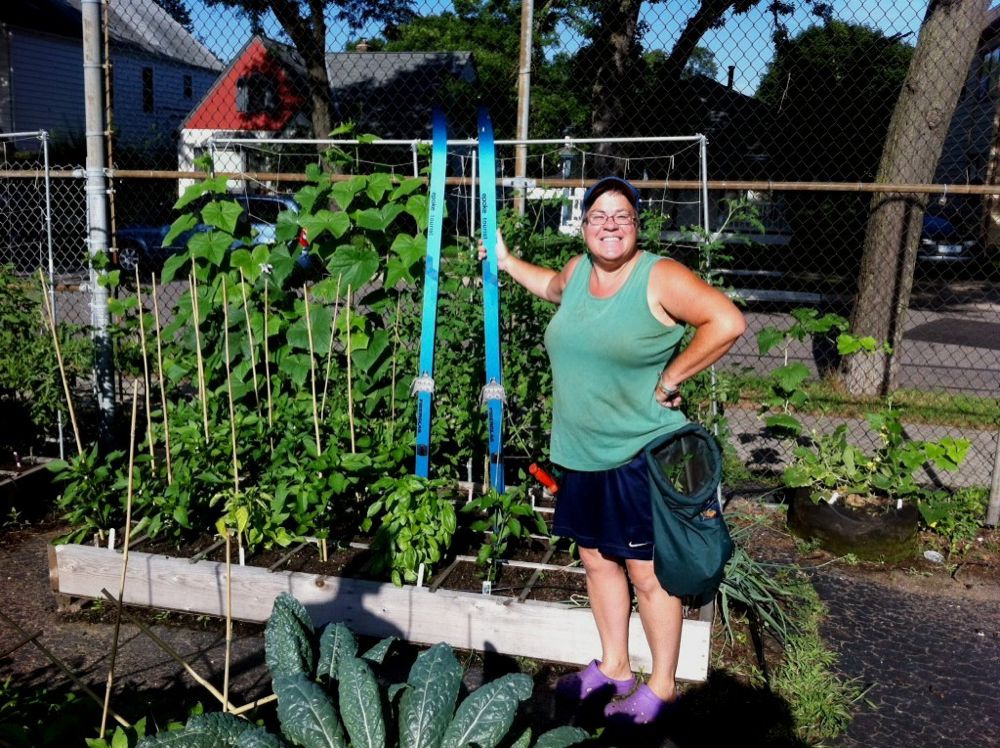 Currently, Little Kitchen faces a five-figure deficit with the EFN. Although the EFN has been flexible and Little Kitchen has worked out a payment plan to pay off the debt, Little Kitchen doesn’t want to tarnish their relationship with them.

So, a few months ago, the church council decided that if they couldn’t maintain the numbers they were serving at the food shelf within their budgeted allotment for monthly expenditures they would need to cut service hours.

“Essentially what that means that if I don’t have any food in stock I am closed,” Schultz said.

“The whole mission of Little Kitchen is to serve everyone who applies. Once every four weeks if that’s when they want to come. There is really no way I can cap numbers without violating that mission.

“It’s a decision making process that I’d rather not go through.”

Another difficulty is that the Little Kitchen does not qualify for much funding. Being loosely affiliated with a religious organization (Northeast Community Lutheran Church), keeps them out of any government funding. They considered making themselves a separate non-profit but that requires more start up costs than they could afford.

Currently, between 30-35 percent of their contributions come from the Northeast community and from fundraisers.

“We never turn away food donations because that is the only way we get certain types of food that food banks tend not to carry,” Schultz said.

Schultz said that today food banks are struggling to keep a variety of food in stock like meats, sugar, and flour, and supplies of soap and toilet paper. Some of these items used to be abundant because of corporate-level donations, but have started to diminish.

Feminine hygiene, combs, toothpaste, deodorants, baby formula, and diapers are all items that are difficult to get from the food bank.

Although they gladly accept food donations, it is the monetary donations that go the furthest. For every one-dollar donation, Little Kitchen is able to purchase nine dollars worth of food from EFN.

According to Schultz, a great deal of the money allocated locally to Northeast goes to Second Harvest because they make it easy to make monetary donations, and money also tends to go to the Salvation Army.

Because Little Kitchen is so small, not many people know they even exist.

“Everybody’s heard of the Salvation Army. Everybody recognizes the bell ringers. The Northeast Salvation Army focuses a lot of its effort and budget on feeding the hungry but the whole reason we exist is because they can’t serve everybody,” Schultz said, pointing out that the Salvation Army cannot serve anyone without current identification and proof of address.

“We exist and accept people who can’t produce that stuff. People who are homeless, people who are highly mobile, recent immigrants,” she said. “But we’re not getting that public money. The Salvation Army is doing great work but if some of the support could be shared around I think that would help a lot more people.”

Although fundraisers work, the Little Kitchen can do them only so often and expect to make a lot of money. The plan going forward is to make a direct appeal on their current partners and to work on developing more community partners who can promote their cause and collect periodically for them, and basically taking each day at a time.

“We have a lot of good partners but there is a lot more potential in Northeast,” she said.

“If they were willing to adopt us that would be really helpful.”

In 2013, Little Kitchen will have to make some tough decisions when it comes to budgeting and determining what the church’s commitment is to keeping the food shelf open.