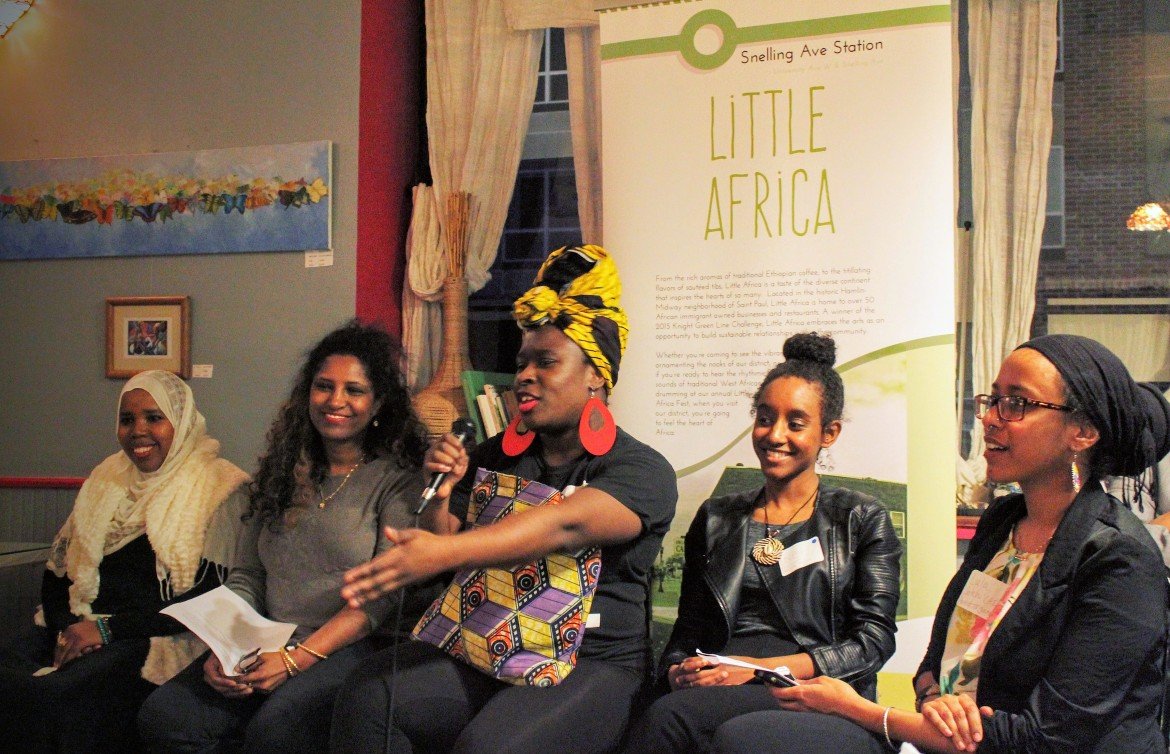 “Where are my roots?” was the question posed to artists and audience members at Little Africa’s first arts, open mic and dialogue series. The free event, held Jan. 20 at the Snelling Cafe in St. Paul’s Hamline-Midway neighborhood, joined ongoing efforts with the Little Africa initiative. Little Africa’s artist organizer, Lula Saleh, who describes herself as a writer, storyteller and singer-songwriter, hosted as a dozen immigrants, third-culture kids, politicians and activists took the stage to artfully share their identities through speeches, song and poetry.

Saleh opened the event with an essay focused on the question that many new immigrants are often asked: “Where are you from?” The question aims to place immigrants outside of the American fabric, rather than within it. Saleh and the minds behind the Little Africa initiative want to change this narrative by building a cultural corridor that places African immigrants, culture and businesses firmly within the geography and history of the Twin Cities Metro area.

Funded in part by Twin Cities Local Initiatives Support Corporation (LISC) and in collaboration with partners such as the Knight Foundation, Little Africa is a branding and marketing campaign run by the African Economic Development Solutions (AEDS), which first opened its doors in 2008.

Minnesota, despite its foreboding winters, is home to one of the largest African immigrant populations in the country, which is diverse in nationality and provides a major economic boost to the state. The community has an estimated annual income of almost $2 billion and an African product and services market of around $281 million.

Yet, as noted in a 2015 report titled The Economic Potential of African Immigrants In Minnesota, by Concordia University’s Dr. Bruce Corrie, “African immigrants in Minnesota…are largely invisible on the policy radar.”

Little Africa is an effort to make African immigrants more visible by leveraging the community’s unique cultural and economic assets and strategic location along major transit corridors as an economic development strategy.

“I envisioned Little Africa as a way to create visibility. Our organization does business development, training, consulting and helping with land and home ownership programs. I saw those as wonderful but not enough,” Gene Gelgelu, AEDS’ executive director, said. 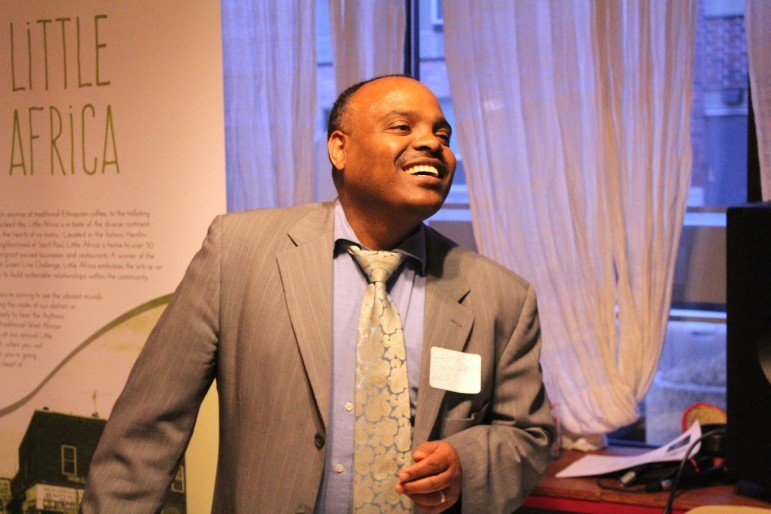 Gelgelu wanted to create a space where African immigrants saw opportunity, felt safe and viewed themselves as an engaged part of the decision-making process.

“It’s more of how we discuss how we help people be part of the fabric of society,” he added.

While there have been concentrated pockets of African businesses throughout the Twin Cities metro area (most notably in Brooklyn Park and in the Cedar-Riverside neighborhood) for quite some time, AEDS’ Little Africa movement is the first coordinated attempt at building and marketing intentional spaces for the community.

So why St. Paul and not Minneapolis or Brooklyn Park? According to Gelgelu, “We want to do it in phases, not because we’re preferring one or the other city, but it was something that needed to be tangible. This work is time consuming. It requires heavy, intense, public engagement and I know what it took me firsthand, that’s why we’re doing it in phases.”

During construction of the Green Line in 2010, many businesses (including many African businesses) along University Avenue were suffering losses in revenue. AEDS came together with other community organizations and leaders to discuss strategy; how could they help ensure businesses thrived long enough to see the benefits of the Green Line?

Corrie, who led the 2015 report on African immigrants in Minnesota, suggested a coordinated branding effort that would leverage the rich cultural heritage present along St. Paul’s central corridor. This saw the birth of branding initiatives such as the successful Little Mekong and Little Africa projects effectively rooting the heart of Little Africa within St. Paul’s Hamline-Midway neighborhood. 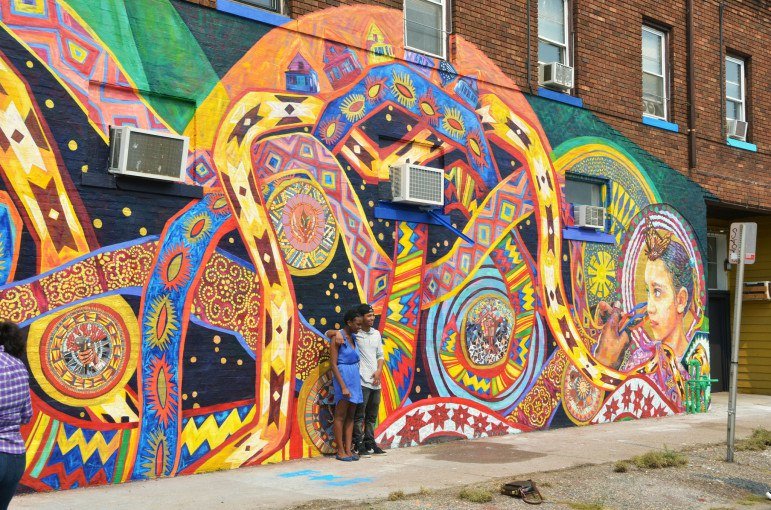 “Braided” mural by Greta McClain, at the corner of Snelling and Sherburne avenues in St. Paul’s Little Africa district. Photo by Mark Peterson.

In the fall, a walking tour (called C4ward Arts) of the larger cultural district along the Green Line brought funders, community members, business owners, educators and artists to businesses along the corridor. Little Africa’s portion of the tour, led by Saleh and AEDS’ Sagirah Shahid, centered on storytelling and fostering dialogue.

“We looked at the murals, talked about the cultural impact and significance of them and ended with a lunch at the Snelling Cafe, where we had performances and a curated showcase with artists from Nigeria, Eritrea, Liberia, Ethiopia and Somalia. Then had a dialogue about the concept of ‘home’, how do you feel rooted, and what does ‘home’ look like to you?” Saleh said.

Dual engagement with an eye on economic development and community participation through art and dialogue are what make the Little Africa initiative unique. The idea of creative placemaking as a way to build better communities takes hold in cities and arts organizations across the country. Little Africa is one of few, if not the only, initiative in the country geared specifically towards the African community.

She added, “only recently has there been a push for the arts and artists to be integrated in that, whether locally or nationally.” And for artists of African descent, their removal from the decision-making process, or in shaping communities is even more pronounced. Their work and art is often relegated to single rooms within larger artist organizations or special events with a focus on ‘African art(ists).’

This is why Saleh takes her role as artistic organizer so seriously. While she wants to create a platform for local artists through the Arts Series, she also strives to nestle “a natural culture that embraces arts and artists” within AEDS’ economic development efforts.

Saleh aspires to establish Little Africa as “the place for African arts and artists” locally; a space in which they do not feel “othered,” but instead are given the flexibility to explore their diverse narratives without first having to qualify themselves or their work as “African.”

“White people don’t have to justify why they’re doing art by adding a qualifier. They’re seeing as full artists, no matter what they talk about. We are not seen as valid unless we pigeonhole ourselves in a certain way. I don’t want to make folks think that they only have to talk about certain issues,” she said.

There’s also a generational shift in the approach to arts within the diaspora community, Saleh said. As opposed to their parents, many second-generation African immigrants are turning to the arts to explore themselves, their rich oral histories and the world around them.

“I think it’s very important to intentionally support this generation of artists because we’re literally the crossroads between past and future. We’re the generation who’s trying to feel rooted and trying to find home. We’re trying to rebuild based on the little that we know or have,” Saleh said.

Gelgelu echoed Saleh’s sentiments, noting that artists were essential to Little Africa’s efforts because they allow the community to talk about difficult topics, like racism, which new immigrants often learn about the hard way once they are in the U.S.

Following the success of Little Africa’s January open mic, where a full house saw popular performers such as Ifrah Mansour and Abdi Phenomenal take the stage, Saleh has big plans for the remaining 2016 Art Series events. Taking place every other month in different businesses within Little Africa, the events will feature facilitated conversations, panel discussions, visual arts and maybe even another open mic.

The second Arts Series event, titled African Women Entrepreneurs and Artists Networking Dinner, was held Wednesday, March 8, at the Flamingo Restaurant. The event coincided with International Women’s Day 2016 and celebrated the strong entrepreneurial spirit of African women with storytelling from business owners located in Little Africa and other artist performances.

Saleh hopes to reach multiple pockets of the African diaspora and other interested community members with themes ranging from what it’s like to be an immigrant kid to healing and well being in the African community to the business of being an artist – an event she envisions will have “a networking, happy hour vibe targeted towards younger artists and entrepreneurs.”

There will also be a daylong outdoor Little Africa Fest planned for August, following a busy summer of facade improvement in the Hamline-Midway neighborhood.

Both Saleh and Gelgelu returned to the importance of these and other formal events as listening sessions.

“We want the community to own the vision. We want it involved. We want to create a space where we thrive, our children succeed, and in order to do that, not one person or organization can do that. The community needs to be involved,” Gelgelu stated.