Tuesday noon we, along with several hundred others, braved Twin Cities roads to gather at a lunch at McNamara Alumni Center at the University of Minnesota.

The event was the Carlson School of Management’s “First Tuesday” and the large audience seemed mostly to be Twin Cities business representatives. University of Minnesota President Eric Kaler was one of the dignitaries in the audience. 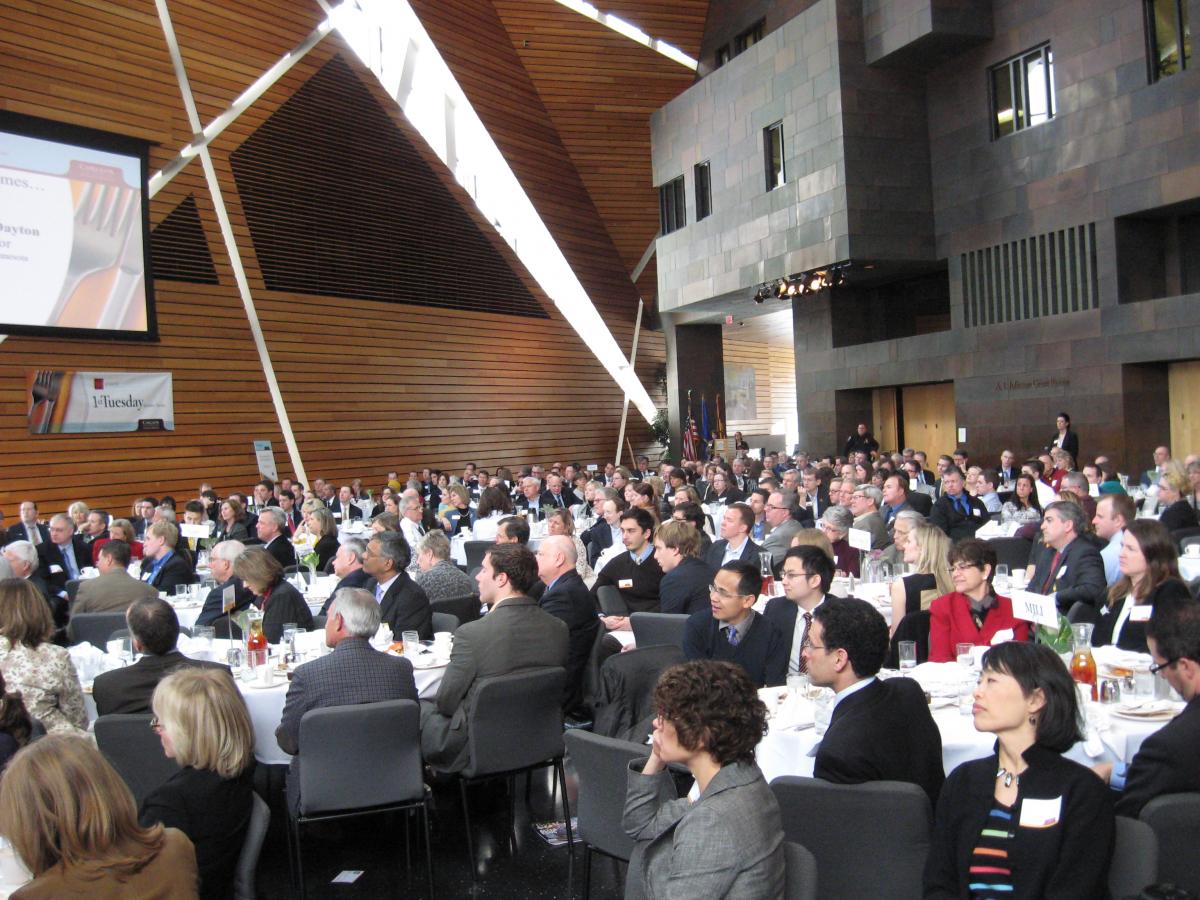 A portion of the audience at First Tuesday March 5

It was a most interesting hour. Gov. Dayton spoke, referring a number of times to this handout which we all received: Guv Hndout Mar 5 2013002. At the end, he answered questions and listened to advice from the floor, presented at random through several portable microphones. He was with us for over an hour; then departed to talk with another group somewhere else.

The tension of driving to the event after 8″ of snow, was worth it.

Governor Dayton knew his audience, and he politely but certainly took the offensive.

Judging from the tens of thousands of communications I see, from left and right, and politically disinterested, we are a society that takes non-negotiable positions, basing our judgements on our understanding of our one or two most important issues.

Contemporary society is complex, so we citizens mostly revert to simplicity. We don’t want information unless it supports our position.

It is a dangerous attitude, shared by far too many.

Gov. Dayton, as we Minnesotans know, comes from a very prominent Minnesota business family; spent part of his early career as a school teacher in inner city New York; and has spent most of his adult career in public service in the state of Minnesota.

He has an impressive portfolio. Still I sometimes hear him ridiculed for various unfair reasons.

But he knows bottom lines and good public policy.

The Governor was in a serious mode, yesterday.

His anchor story was of meeting with a dozen or so of Minnesota’s most prominent big business leaders not long ago. It was one of those fancy, private dinner meetings somewhere.

He marveled, he said, at how these very sophisticated captains of Minnesota business and industry seemed not to budge from their respective certainties, even when confronted with pesky facts that didn’t support their positions. (Think assorted mantras: “business is being forced to leave our state due to high taxes” and the like.) Belief seemed to trump reason.

They were stuck (as we all can be) in their belief about reality.

Sitting there, I could better understand people at my level being mired in our own unrealities, than these anonymous Big Shots who privately had the Governors ear for an extended period of time.

We ordinary people have to struggle to get to “facts”; these Captains of Minnesota Business have boatloads of employees in their corporations who, if they were hired for and allowed such, could be truth tellers.

But hearing the truth is inconvenient, and even these business leaders apparently wouldn’t publicly budge, even in the face of contrary evidence from the Governor of their state.

Gov. Dayton spoke as a confident leader, in command of his narrative, unquestionably competent including addressing questions from the floor.

The Governor commented about Minnesota’s flagship University of Minnesota, and said he had gathered data which demonstrated that the UofM did as well or better in its accomplishments than the sum of the eight major universities in Boston – little places like Harvard, MIT and the like. His very prominent businessman Dad once told he and his siblings: “if you put all your eggs in one basket, you better take mighty good care of that basket.” But, he said the UofM, and public institutions in this state, have suffered from policies of austerity; and the state suffers as a consequence.

His Tax proposals are intended as informed thoughts and invitation to debate on alternatives to the pesky realities of our state, where for too many years we have relied on shell games, like shifts, to pretend we are doing well financially, supposedly “balancing our books”, when in reality we were digging ourselves a deep hole from which we now have to fashion a way out.

At the beginning, the Governor was greeted with polite applause.

At the end, there was a standing and sustained applause, joined by most in the audience, applause which did not seem forced.

It was a good day. 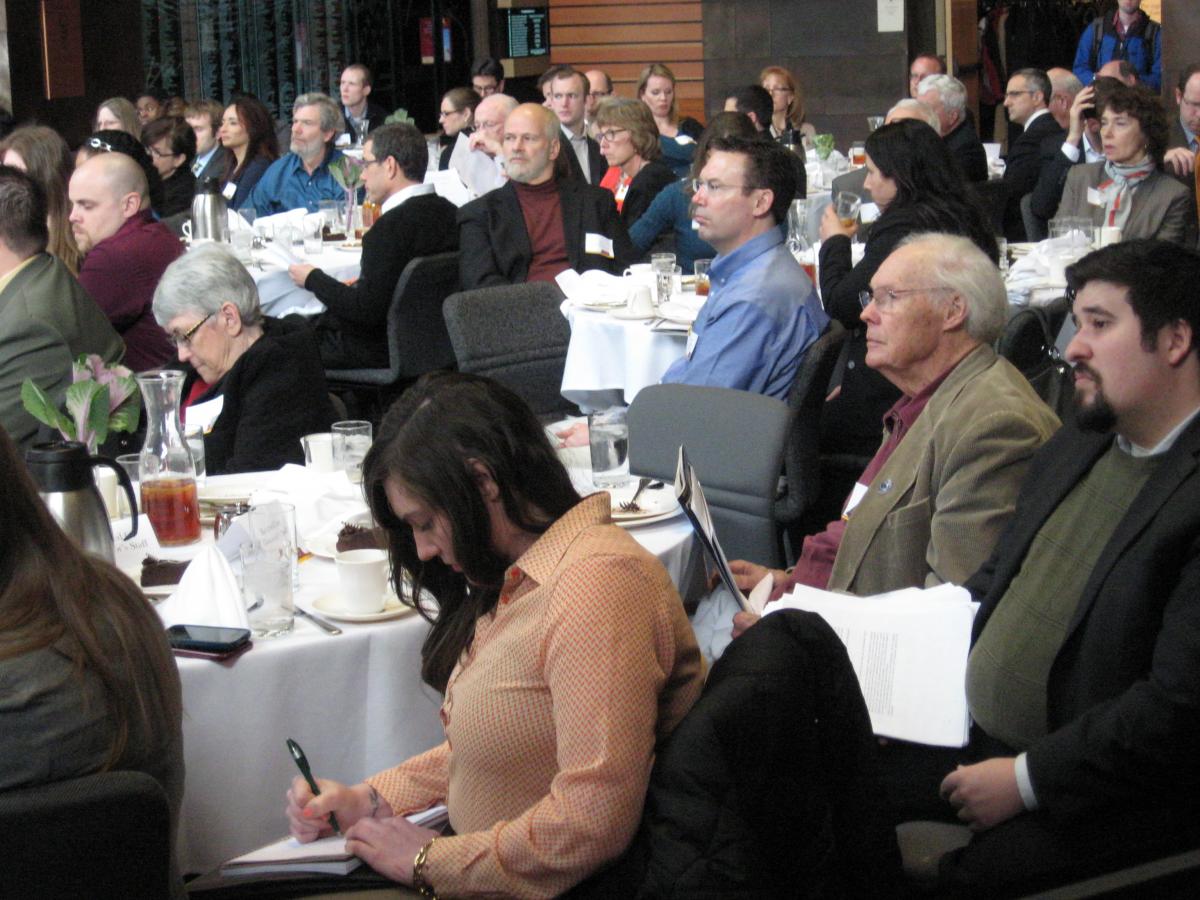