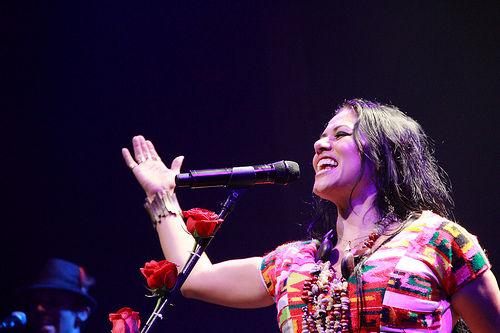 As millions of Americans fixed their eyes on television screens for the second presidential debate October 16, several hundred Latino-Americans assembled in south Minneapolis in celebration of Latino Heritage Month.

For many of the nearly 450 people in the audience at East Phillips Park Cultural and Community Center, the event was a chance to meet Latina Grammy-award winner Lila Downs, who spoke of her love for art and music during a panel discussion.

Minnesota-raised singer and composer Downs graduated from the University of Minnesota with majors in voice and anthropology, according to her website.

Downs has deeply searched her Mexican roots for years, which has resulted in her unique Mexican and indigenous music and her style of commenting on the struggles of ordinary people.

Even though Downs is a world-renowned celebrity, event participants said they felt connected to her.

“She’s a very strong indigenous woman,” said Alendra Cano of Minneapolis. “She’s a positive icon to remind us that life is not only about deportation and illegal immigration. It’s about our young people. It’s about the future.”

For Latinos, the largest minority population in the United States, October marks the month to celebrate Latino heritage throughout the country.

One of the important reasons this event has been observed is that the community needs to learn and understand their roots, said community organizer Marlene Rojas.

“Since we spend much of the year working, this is an opportunity for the community to reunite and feel the art and culture together,” Rojas added.

On the following evening, October 17, Downs appeared in concert at the Ordway Center in St. Paul. This performance was part of the Ordway’s Máscaras y Milagros: Mexican Arts in MN series celebrating Mexican culture, which includes a performance by the Delfos Contemporary Dance Company of Mazatlan, Mexico, on October 20 and a show by Poncho Sanchez and His Latin Jazz Band to be held on October 26.