When Richard Venberg looks around his neighborhood, he sees solar power potential everywhere.

“If I can do it in this tiny little backyard, then that guy’s garage could have some on it. And that guy’s roof, which faces pure south, could do it too,” he says, pointing out nearby properties in the Como neighborhood of Minneapolis. “I’m just trying to disprove that perception that it can’t work in the city because of all these obstacles, because obviously it can.”

Ten years ago, Venberg, an architect with his own sustainable design/build studio, turned his detached garage into an eco-friendly workspace.  Solar collectors on the roof heat the studio and provide hot water for his house, while photovoltaic (PV) panels power the system’s circulation pump. The workshop also features a “living roof” with a vegetable garden and rainwater catchment.

Venberg and dozens of other Minnesotans opened their homes and businesses to the public on Saturday, October 1, for the Minnesota Renewable Energy Society (MRES) Solar Tour. Over 800 people around the state took the annual self-guided tour of homes last year. The event gives visitors a chance to learn about renewable energy systems and talk to homeowners about the costs and rewards of switching to solar.

This year’s tour featured 45 different sites, including 29 in the Twin Cities metro area and eight within the cities of Minneapolis and St. Paul. Dustin Denison, president of Applied Energy Innovations (AEI), says there are some challenges to using solar in urban, high density environments. In Minneapolis, these include the city’s dense urban forest and older housing stock.

Longfellow community residents Dave and Nancy Moe worked with Denison and AEI to install a solar thermal system in their home in the fall of 2010. Theirs was the first installation completed through the MRES “Make Mine Solar” bulk purchase program, and the system has provided 100 percent of their hot water needs since June 1. They have since gotten rid of their gas water heater and cut their gas bill by more than half. Still, Dave Moe says it’s more about the principle than the payback.

“What I want to do is be an example for other people. I didn’t look so much at the cost savings. It will probably take me maybe twelve years to get my money back on this system,” Moe says. “But I’m not so worried about that, because I know that’s the direction we have to go, as a country.”

Moe has more eco-friendly improvements planned. He has already made a reservation for the Nissan Leaf electric car to be released this spring, which he eventually plans to run on solar power using PV panels. Electric cars and other non-solar sustainable living practices, such as rainwater recapture and urban chickens, were new features listed on this year’s solar tour website. 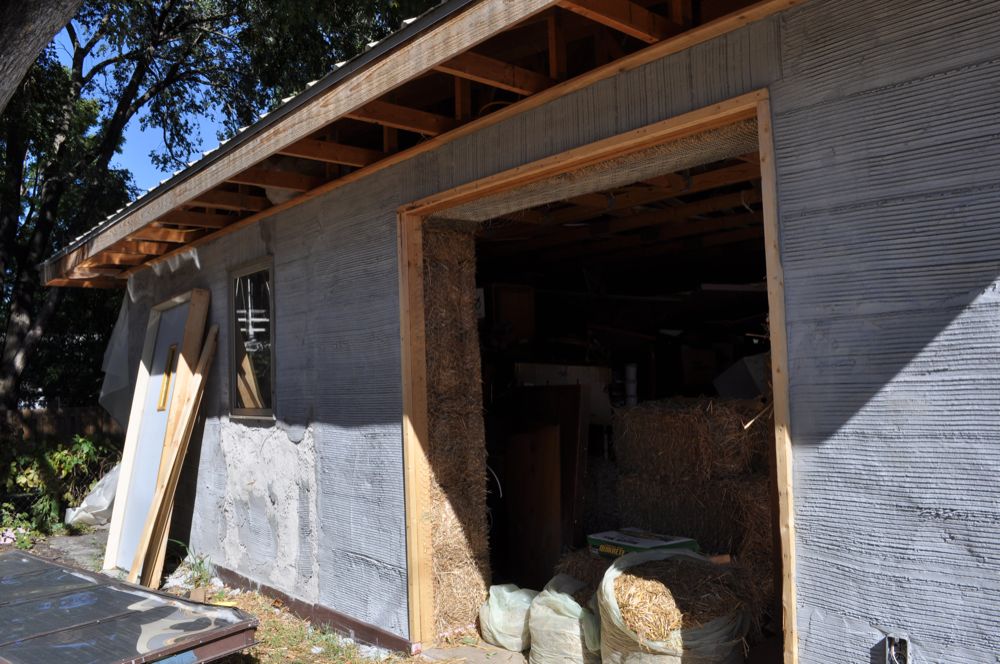 Visitors to Sunny Day Earth Solutions, a green consulting and education company in Como, could check out the first approved straw-bale structure in Minneapolis in over fourteen years. Ramy Selim, the company’s owner, explained that straw-bale construction combined with active and passive solar heating will allow for an entirely off-grid garage.  When it’s finished, the garage is expected to maintain temperatures of about 50 degrees F in the winter. Selim plans to provide moisture data to the city and other interested parties in order to “get straw-bale back on track”after failed attempts to build with straw in the 1990’s gave the material a bad name.

The free tour attracts everyone from students and curious neighbors to homeowners dreaming of going off the grid. According to Doug Shoemaker, 2011 MRES Solar Tour co-organizer, Saturday’s nice weather led to high turnout, and this year’s visitors seemed more eager than ever to invest in solar.

“The main thing I was so aware of is that there were serious shoppers out there,” says Shoemaker.

It may be that homeowners are eager to take advantage of federal tax credits before they expire, and Shoemaker says that with the federal, state, and local incentives out there, this is the time to buy. “It’s buying energy for the future at today’s prices,” he says.

Jim Jacobson, a Seward area resident, agrees that for anyone able to cover the upfront costs, now is a great time to pursue solar. Jacobson made the switch seven years ago, and today his photovoltaic solar electric system delivers 119 percent of his home energy needs over the course of a year. He encourages those short on cash but interested in renewable energy to get started, even if only in a small way.

“It could be one panel, just to charge your laptop. Or it can be reducing your energy use, changing over to compact fluorescents.  So, just start with something.”