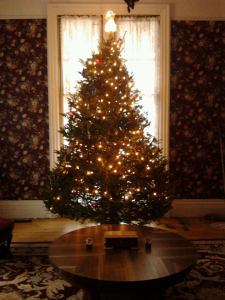 Winter Solstice arrives right on schedule this Friday, 21 December, at 11:12 UTC – 5:12 in the morning here by mythical Central Time.  It’s being celebrated as the end of the world, probably not because anyone believes that’s going to happen.  No Mayan actually predicted such an event, but it is the end of their 13 Baktun cycle.  My guess is that the Mayans would have used this as an excuse to celebrate too, although their idea of a “party” often involved horrific acts of violence.  It’s a staple of the day.

What really happens is that this is the moment when the North Pole is pointing directly away from the sun and starts its wobble back.  The exact moment of change in the orbit is also the moment when the long nights change the least, in keeping with the nature of cycles.  Light defines the season for us even more than dark notions of destruction because it is the light that will return.  That is more worthy of a party to me.

We have a Solstice Tree in the house, in keeping with the ancient German tradition.  The kids named it “Sylvester”, which I approve of given that New Year’s Eve is also the feast of St Sylvester, as it is known in many Catholic nations.  The very idea of a tree itself has a fascinating history, too.  The ancient Teutons would tie bits of meat and other offerings to a tall tree and set fire to it on the Solstice, in order to coax the Sun God to come back. It apparently worked. Many years later this would evolve into another German tradition, which is to periodically set fire to neighboring countries. Also, they took the trees indoors and called it Christmas.

There is something about fire and violence deep in the midnight of the year.  Darkness puts us all on edge, so a few candles make all the difference.  Making this a season of light is what makes it a season of hope.

There are those who see a “War on Christmas” being waged between the religious and the secular.  I find this utterly hilarious for many reasons.  First of all, Christmas has always been a pagan holiday loosely adapted to assign the parts of the Gospel that describe Jesus’ birth to some particular part of the Christian Calendar.  The time was chosen in part because of the need for hope among darkness, but also because 25 December was Natale Sol Invictus, or the birthday of the invincible sun.  It was celebrated with parties largely left over from the earlier Saturnalia, or feast of Saturn.  The Romans largely ditched their Greek-borrowed pantheon of Gods by 200AD and took up the Persian-borrowed cult of the Sun.  When Constantine declared Christianity the Roman faith in 380AD, it was easy to replace the Sun with the Son and continue on the partying.

The need for a birthday for Jesus is a very Catholic concept in that it fixes the passing of time into one year-long celebration of the life of Christ and the saints, each day being some reminder of the True Path of faith and righteousness.  The very calendar, with nearly every movement in life, was tied to faith in a “catholic” (comprehensive and universal) outlook on life.

The reformation found Protestants generally opposed to all the odd pagan stuff that had worked its way into the established Catholic (big “C”) Church, and Christmas was generally banned or diminished.  Atheists often point out that the early US Congress met on Christmas, but this was far from a demonstration of the separation of Church and State – it was actually a standard Protestant practice to go about life as usual on 25 December.

War on Christmas?  Well, yes – it’s rather obviously pagan.  Or Catholic.  Or consumerist.  It’s always been a holiday that was hard to pin down as one “thing”, even as people have taken sides one way or the other.

Not Solstice.  It’s an astrological event that we can time to the minute.  It’s not the end of the world but the end of the year, the way the day ends at midnight.  It’s 10 days off from the actual end of the year only because the Romans were really lousy at devising astronomically accurate calendars, unlike the Maya.  You can always blame the Romans for everything – especially any solid idea of what “Armageddon” is that has been handed down.

And so the stories all run together, like the wobble of a tiny planet around an ordinary star.  Blame one or more ancient civilizations for the odd traditions any of us have, as you can blame your fellow human for the way they feel about public celebration of any given tradition.

Then again, it’s always better to light one single candle than to curse the darkness.  Especially on Solstice.