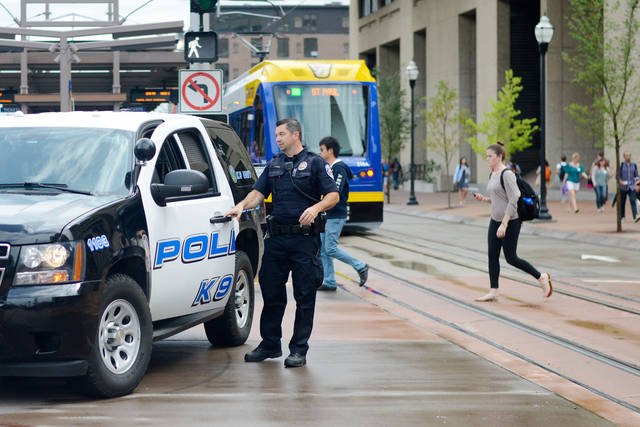 As crowds of students crossed the Green Line light rail for the first time last week, University of Minnesota and city officials upped safety measures to prevent accidents this year.

Metro Transit and school police officers ramped up their efforts in educating students about moving safely around the Green Line and patrolled the highly trafficked area on Washington Avenue Southeast. With the campaigning and extra surveillance, police hope to instill safe habits among the University community.

“We are just asking they use common-sense, alert behaviors around the light rail,” Franklin said.

“Ultimately, they will start writing citations for people crossing against the light and [performing] dangerous behaviors,” he said.

Vice President for University Services Pamela Wheelock said the first step is education, rather than issuing a ticket for simple offenses.

The University began discussing its plans last winter to catch students’ attention and educate them about how to cross the street safely with the new Green Line, Busse said.

Wheelock said the University has only 50 officers, and it’s important to use their time wisely, so ticketing for traffic offenses could be a misuse of valuable resources.

“I think we’ll use their enforcement where it makes the most difference,” Wheelock said.

Kinesiology sophomore Gabe Gornet said he noticed more police officers during the past week but doubts that education will dissuade students from using
headphones.

“People on the commute like listening to music and believe the signs are good enough,” Gornet said. “It’d be too much to enforce. I feel that a person listening to their headphones is their own liability.”

When the Green Line opened in June, Metro Transit police dedicated 22 officers to public safety enforcement along the line, Franklin said. Those officers wear both uniforms and street apparel, he said.

Officials from the University and Metro Transit designed the extra campaigning and patrolling for the first week of classes, Franklin said.

But Busse said officials could revive the pedestrian-oriented campaign in the future if necessary.

“If it’s well received, if it’s getting people’s attention, if it seems to be a worthwhile effort, then yes, we would certainly continue,” Busse said.