Light rail construction in the intersection of Oak Street and Washington Avenue was supposed to be completed in November. (Photo by Marisa Wojcik)

Complications with construction on the Central Corridor light-rail project have caused contractors to miss major deadlines in the University of Minnesota campus area.

Although the light-rail project is 40 percent complete overall, construction around campus is actually behind, forcing the Metropolitan Council and Ames/McCrossan Joint Venture — the contractor team building the Minneapolis portion of the line — to push some deadlines further into 2012.

One part of the project that missed its deadline is the Oak Street intersection. The initial contract between the Met Council and Ames/McCrossan JV required the entire intersection to be completed by Nov. 30, 2011, according to Sandy Cullen, assistant director of Transportation Systems Design for Parking and Transportation Services at the University.

It included placing tracks along both sides of the intersection and completing final pavement and sidewalk connections.

The opening of Washington Avenue between Walnut and Oak Streets was also behind schedule. Although it’s open now, it did not meet the 150-day completion requirement stipulated in the contract for work in front of businesses, Baenen said.

Work was delayed on the East Bank for a number of reasons, including numerous conflicts moving private utilities out of the work zone, field issues like unknown utilities found under the ground and construction work constraints imposed by the University, Baenen said. 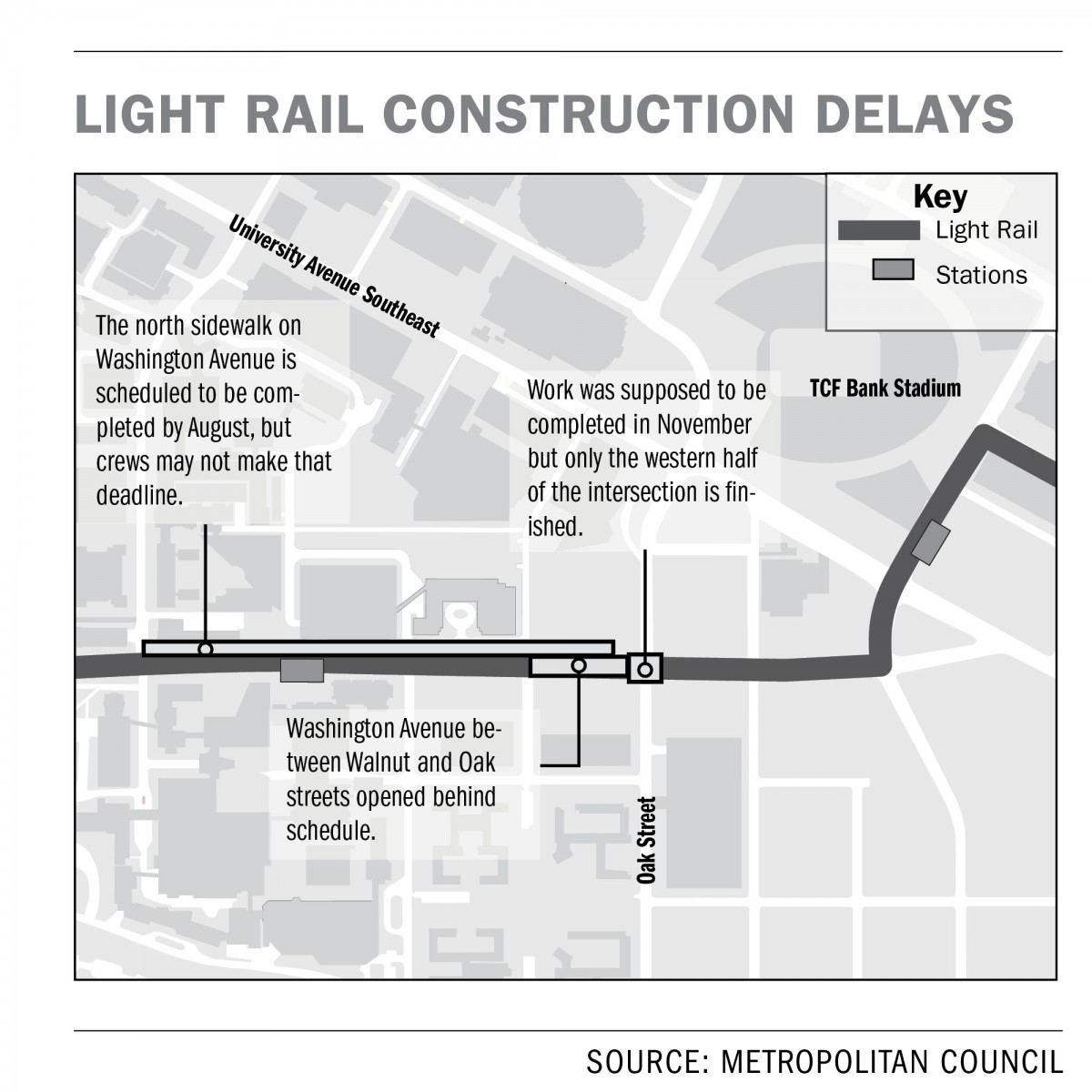 These constraints restricted the hours crews could work during the day and limited the amount of vibrations the construction could produce. The University permitted the crews to work Monday through Friday from 5 a.m. to 2 p.m. and Saturday from 5 a.m. to 1 p.m., Baenen said.

But Kathleen O’Brien, vice president of University Services, said it would be a “false characterization” to say the University’s restrictions are a reason the project has missed deadlines. She said those constraints were put in place to mitigate effects on neighboring research facilities.

“This agreement was well known before the contractor was doing their schedule,” O’Brien said.

Future projects may also be affected because of the delays in the 2011 season. The contractor team is reviewing construction deadlines for the 2012 season and may make further changes, Cullen said.

The north sidewalk on Washington Avenue between Oak and Church Streets is supposed to be mostly completed by Aug. 15, along with major work on the East Bank between Pleasant and Oak Streets. But based on the delays, it will be difficult to meet those deadlines, Baenen said.

Both sides are meeting to discuss the lessons they have learned over the course of construction thus far.

“We’re working together to ensure that the project gets done on time and in budget and also so the University can continue to conduct its business, teach classes and do research,” O’Brien said.

The St. Paul leg of the project has also experienced numerous delays and compliance complaints, which has frustrated community and city leaders.