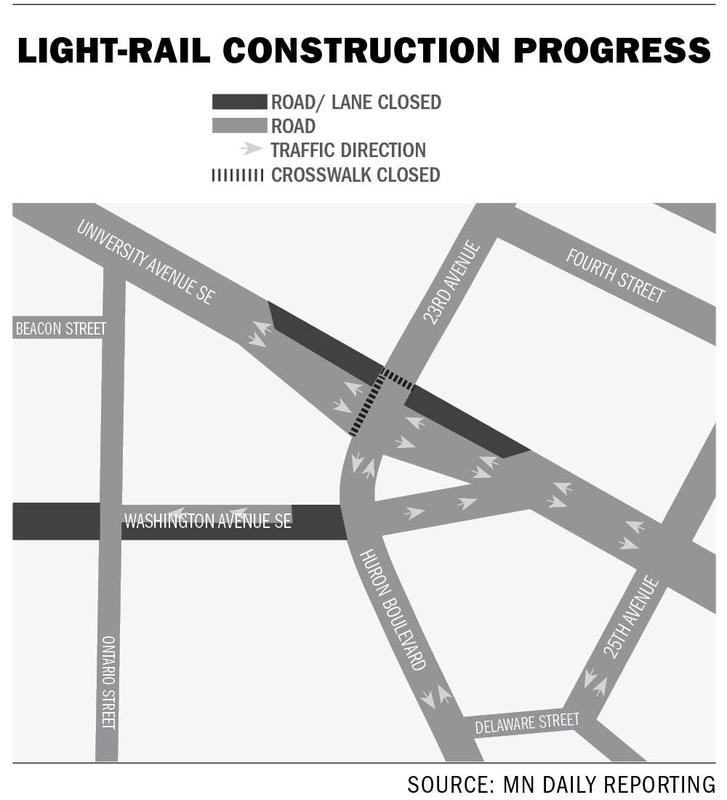 Central Corridor light- rail construction reached major milestones near the University of Minnesota campus prior to the holiday weekend as workers put in extra hours to have roads, sidewalks and crosswalks completed and open for the start of the fall semester.

The reopening of Ontario Street and Huron Boulevard, along with new sidewalks, were goals for the start of school to ensure all students, faculty and visitors  access to campus.

“There was a giant push to get everything done on campus before the beginning of the fall semester,” said Jacqueline Brudlos, spokeswoman for the University’s Parking and Transportation Services. “Fortunately, this huge public works project keeps moving successfully forward.”

The project is 68 percent done and is on track for completion in 2014, said Deborah Ely-Lawrence, spokeswoman for Metro Transit.

Washington Avenue at Huron Boulevard was set to open Monday morning. Crews are still working to complete construction on the south side of University Avenue.

Brudlos said student access around campus, like pedestrian routes, would be ready for the start of school.

“With a project of this size, it’s all about making small goals.”

Last Thursday, one of those small goals was reached when construction crews installed the first Traction Power Substation (TPSS), which helps power the light rail. The station will be one of 14 and was installed near the Raymond Avenue Station and University Avenue.

“Once we get done with this heavy, noisy construction that people see in the results of street closings, we plan to focus on the TPSS systems,” Ely-Lawrence said.

Crews continue to work by installing street lighting, landscaping elements and trees to completed roads and sidewalks while heavy construction finishes up.

Ely-Lawrence said the goal is to have the light rail 75 percent completed by 2013, to focus next year on testing the project to ensure it’s working properly before it opens in 2014.