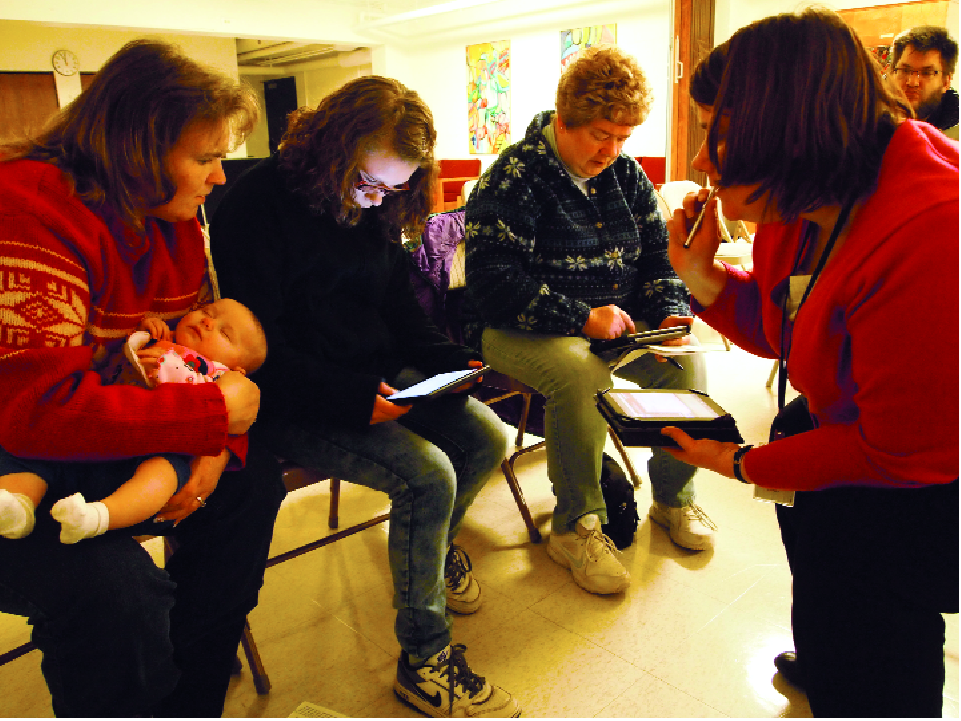 Jill Smith (wearing a lanyard at right) tried to help Cheyenne Mercier get on line with her Kindle. Claire Burgoyne is in the snowflake sweater. (Photos by Margo Ashmore)

“It’s harder than I expected it to be,” said Claire Burgoyne, one of about 15 people who brought their Kindle e–readers to the Columbia Heights Public Library to learn how to access eBooks on Saturday, Jan. 5. While most of the new users were older, young Cheyenne Mercier was also wrestling with getting on line with her new device.

Later in the afternoon, 10 people brought their iPads. Most of the iPad users left pretty confident they would be able to master their new tools, said Jill Smith, Adult Services Manager for the Anoka County Library system. “For the Kindles, many still have to do it on their own computer, so I hope if they get stuck they’ll give us a call and we can walk them through it.” The Kindle Fire has direct wireless access to internet; other types of Kindles require a user to download a book on their own computer and transfer it to the device.

“You can have five things checked out at one time, and you’ll have a choice of seven or 14 days,” said Smith. “And it’s still one book, one user,” she explained. Just like physical books, the library only has so many copies, so some popular works will have waiting lists.

When another reader returns a book that you’ve requested, “you will get an email…so you do have to have an email address to request books. You will have 72 hours from receiving that email, to go in and check out the book. If you already have your five, you’ll have to figure out which one to return, if you want to get that new book.”

A Dec. 24, 2011 New York Times article “Publishers vs. Libraries: An E-Book Tug of War,” and a Frequently Asked Questions sheet Smith supplied the Northeaster explore how publishers relate to libraries, taking different approaches to getting their money for what patrons get free.

From OverDrive, the user accesses a library. Columbia Heights residents access Anoka County Library Digital Downloads, Minneapolis and St. Anthony library patrons use the Hennepin County Library. Unlike paper books, a library card from one county won’t access the other. “Hennepin County has so many more books, they’re much richer,” Smith said. If you’re in a different town using wi-fi, you can still get your home library’s books because you use your library card number.

Like online shopping, books go into a cart and then to checkout, but there is no charge. Approximately 10,000 books a month are checked out from Anoka County, 300-500 a month from Columbia Heights Library, “which has grown every month,” Smith told the Northeaster.

eBooks are returned automatically at the end of the seven or 14 days, you don’t have to remember to turn them in. If you’re reading a book when it expires, you may be able to finish it if you stay logged on to your computer, but close it and the book disappears. On the other hand, “out of courtesy to others who may be waiting,” use “return and delete” if you get done early, Smith said. That’s on an iPad. On a Kindle, a user goes to their Amazon account to turn in a book early.

Other classes on eBook downloads are at the following times and locations. Registration is required, online or at the phone numbers listed below (for the later dates, registration starts about a month ahead). 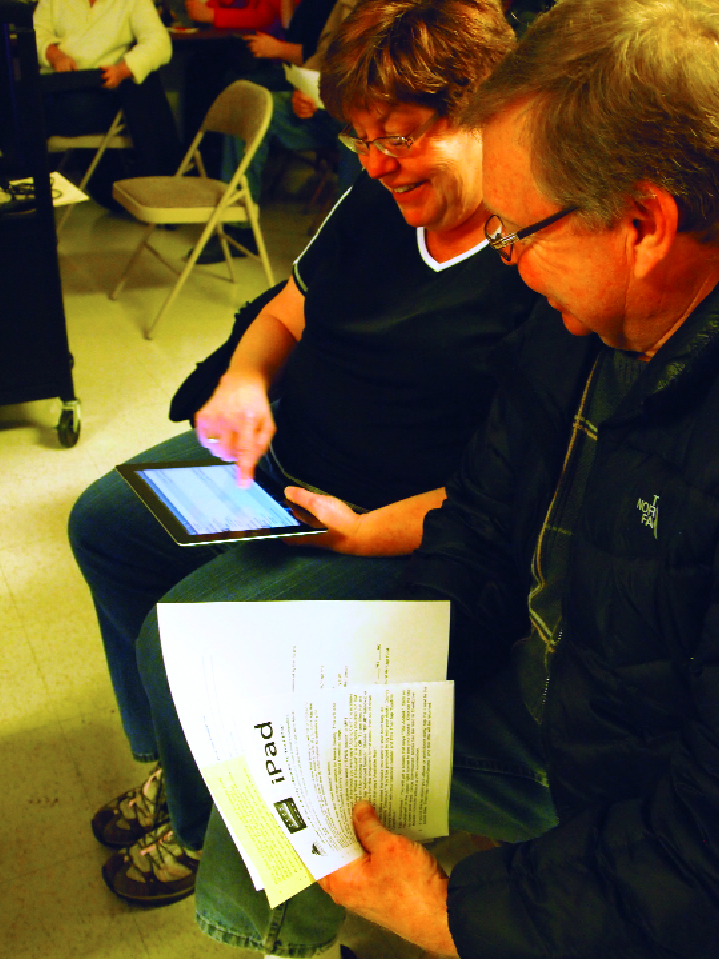 Two in the iPad class scrolled through the titles available, commenting that some of them “must be bodice rippers.”