This year’s House Omnibus Tax bill improves on reforms made last year to city Local Government Aid (LGA). In 2013, policymakers made significant improvements to the aid formula and increased the appropriation to partially replace what was lost over the preceding decade. However, that bill failed to finish the job of LGA by annually adjusting the appropriation to keep pace with inflation and population growth.

If LGA is not adjusted to keep things with growth in the cost of items that cities purchase, all of that growth in those costs will fall upon property taxpayers. As explained in a 2013 Hindsight post, under these conditions city property taxes will grow faster than inflation, even if the total city budget grows at the rate of inflation.

An April 22 Minnesota 2020 article demonstrated how a frozen LGA appropriation tends to push city tax rates higher, with cities with the highest rates to begin with experiencing the largest rate increases. The analysis below describes what happens to the total level of city property taxes paid when the LGA appropriation is frozen. The data, methods, and assumptions used are the same as those outlined in the April 22 article.

In the graph below, the cities examined are divided into five groups.* “Non-LGA cities” receive no LGA because their local tax base is sufficient to meet their entire expenditure need. The remaining cities are placed into four groups of equal size, with cities with the smallest aid gap (defined as a city’s need for state aid as measured by the new formula minus the amount of aid it actually received in the preceding year) as a percentage of prior year levy comprising the first quartile and cities with the largest gap comprising the fourth decile. The property tax change shown is based on the unweighted average for each group expressed in constant (i.e., inflation-adjusted) dollars. 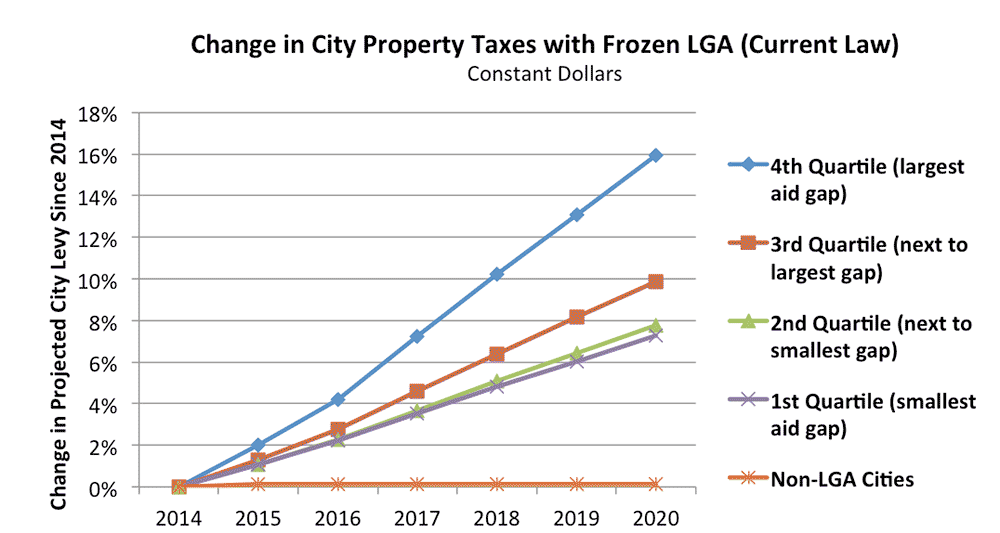 Freezing the LGA appropriation will not impact Minnesota cities uniformly, but will drive taxes up most in those cities with the smallest tax bases and the greatest need for state assistance. The result will be an increase in statewide tax disparities. This situation can be averted simply by allowing the LGA appropriation to increase to keep pace with inflation and population growth. More on this in the second part of this series.

*Excluded from this analysis are 111 cities that are already receiving LGA in excess of their need for state assistance as measured by the new formula. Under current law, the aid for these cities will be gradually reduced over time until it equals their need for state assistance. The aid levels for these cities would not be affected by an LGA appropriation adjustment.