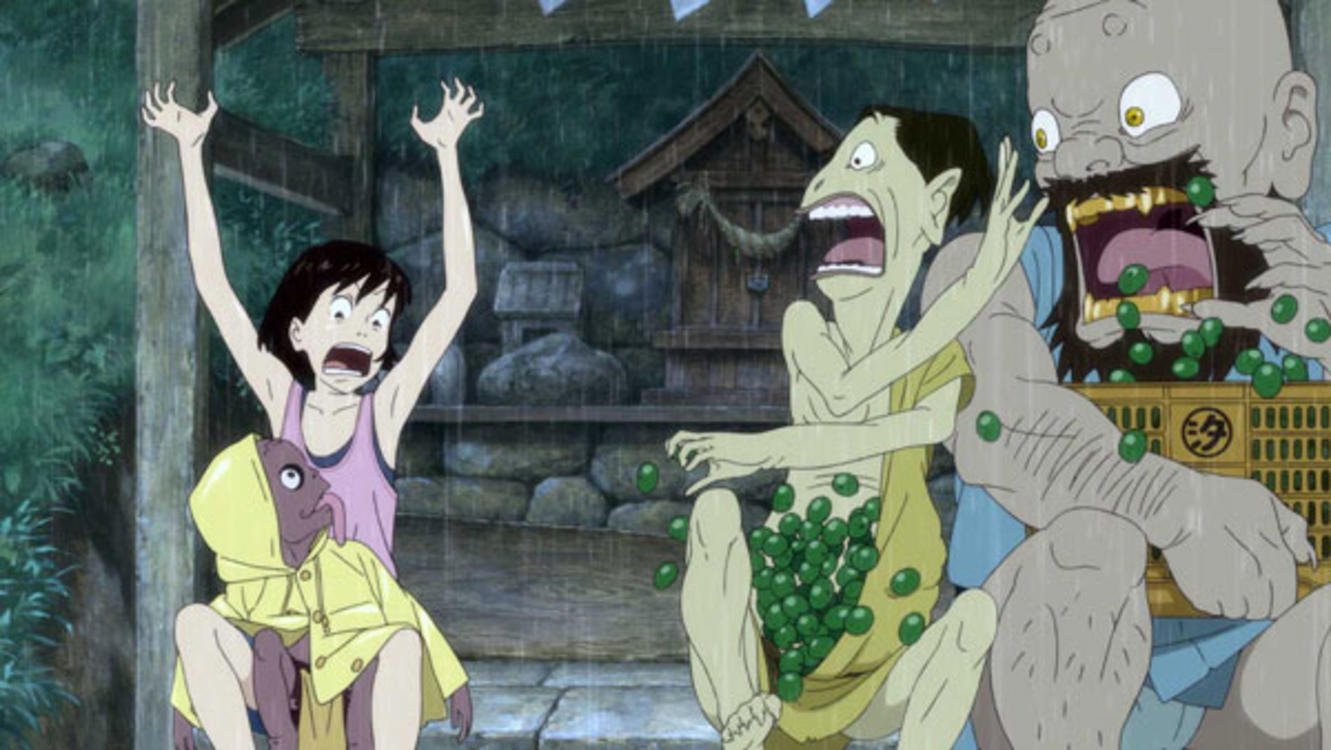 In the world of cinema, alienated children often have the ability to see other worlds. At times, this is merely imagination. At other times, the child has a unique view into a phantom world hidden to adults. Sometimes, you never know which one it is. Momo Miyaura, the main character in A Letter to Momo is one of these children.

Her father (Daizaburo Arakawa), an oceanographer, dies at sea and leaves Momo alone with her mother (Yuka). In the wake of the tragedy, they move to a small island with the rest of their extended family. Momo feels constant guilt over an unresolved fight she had with her father before his death. Momo has no friends and misses the busy Tokyo life. However, her world become more interesting than she wants as she discovers a trio of Imps are haunting her new house. As she learns more about them, she learns about herself and discovers things about her family that change her profoundly.

A Letter to Momo had a good run in children’s film festivals, but grown-ups will find the story just as engaging. There is a kind of simplicity to some of the narrative, but there are many nuances that might escape young children. Even though this is an animated film, Momo’s loss and angst pull on the viewer as if it were a live action performance. Likewise, the Imps themselves are distinct and their antics should entertain all audiences, for different reasons. They have a story of their own, and Momo helps them as they join in her journey.

The world of the Imps is shown when they are among themselves, and these scenes are among the most colorful and engaging. Imps, sprites, ghosts and goblins off all kinds wander and dally all around them. This is a tableau that fantasy filmgoers will delight in. They have a life when Momo isn’t there, and a world that borders hers, but also has its own rules. Often it falls on Momo to show them the rules of her world.

While this film is anime, it lacks most of the flourishes of the genre. Director Hiroyuki Okiura has a long history in the world Japanese animation studios, having worked on films like Ghost in the Shell, Akira and Cowboy Bebop, but this film eschews the kinetic flash of those movies for a more subdued approach. There is a lot of stillness in this film, sometimes recalling the classics of Japanese cinema, and the palette is closer to pastel than primary. The music is drifting and acoustic, matching the mood and beauty of the isolated islands. Likewise, the editing and cinematography are measured and deliberate. There is no movement for movement’s sake and the director is as content to sit and wait for the moment as he is to find it.

While the film does little to thwart expectations of what Momo’s journey will be, the conclusion is still somehow surprising and heartfelt. This film was in development for eleven years, seven of those spent in the writing process, so it is safe to say Mr. Okiura has put something of himself into this film. Comparison to Hayao Miyazaki is inevitable, considering the film’s blend of fantasy and reality, but it is beyond me to say if Okiura can claim the throne. I don’t even know if he would want it, he seems more interested in the details of human drama than the larger issues Miyazaki took on.

Finally, I should mention that there will be a Blu-Ray release of this film for domestic audiences which will be voiced by American actors. If you are a anime purist, or a fan of Japanese cinema in general, this may be the best chance to see A Letter to Momo in theaters for awhile.