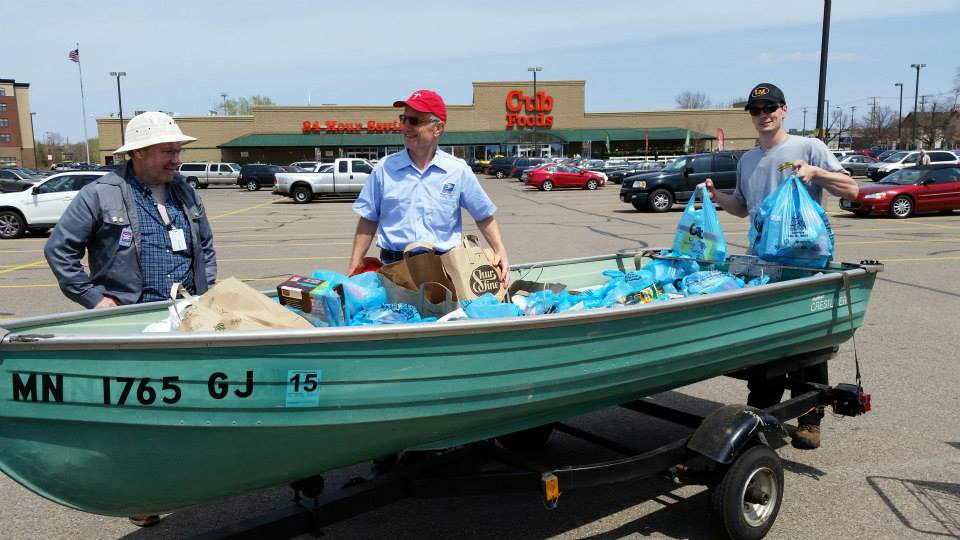 Letter carrier Veronica Feneis arrived at the Cub Foods parking lot about 4:45 p.m. Saturday, May 10, her Postal Service truck full of blue plastic bags stuffed with food donated by people along her carrier route. She reported: “Lots of people gave this year — lots!”

Waiting volunteers unloaded her vehicle and moved the donated food into a larger truck, which soon would deliver the food to a warehouse operated by Second Harvest Heartland. From there, the food will be distributed to local emergency foodshelves.

The scene was repeated across the Twin Cities metro area and across the nation, all part of the 22nd annual National Association of Letter Carriers “Stamp Out Hunger” food drive. The massive operation is the nation’s largest one-day food drive.

In south Minneapolis, retired Minneapolis letter carrier John O’Laughlin and a friend towed a 12-foot Crestliner fishing boat behind their vehicle and filled it with the blue plastic bags of food they found waiting on people’s doorsteps. “I didn’t want to go fishing because it was opening day,” said O’Laughlin, Oakdale. “The boat launches would be all plugged up anyway. I’m retired. I can go anytime.”

“This is a generous zone, 55406,” said Kieran Hughes, St. Paul, 37-year NALC member and steward at the Minnehaha postal station in south Minneapolis. “What I see is fewer people donating but those who do give more and better quality food.” 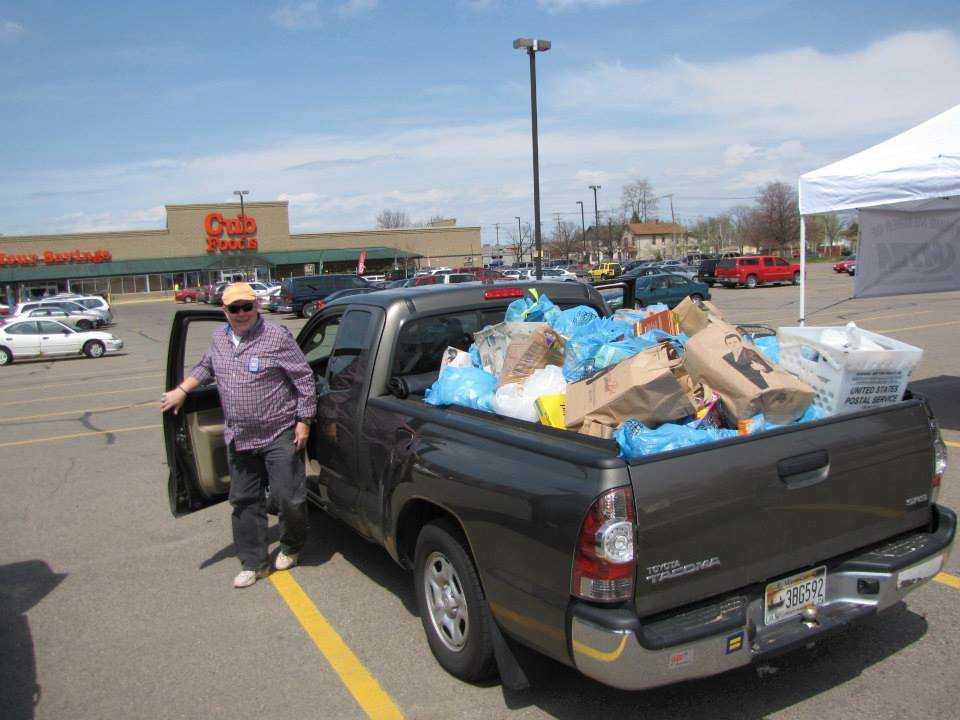 In south Minneapolis, volunteers took some of the burden off of letter carriers by driving the streets and picking up waiting food or by meeting letter carriers’ whose trucks were full.

“My friend is a retired postal guy and I have a truck, so guess what I’m doing today,” joked Michael Hollmen, south Minneapolis (above). 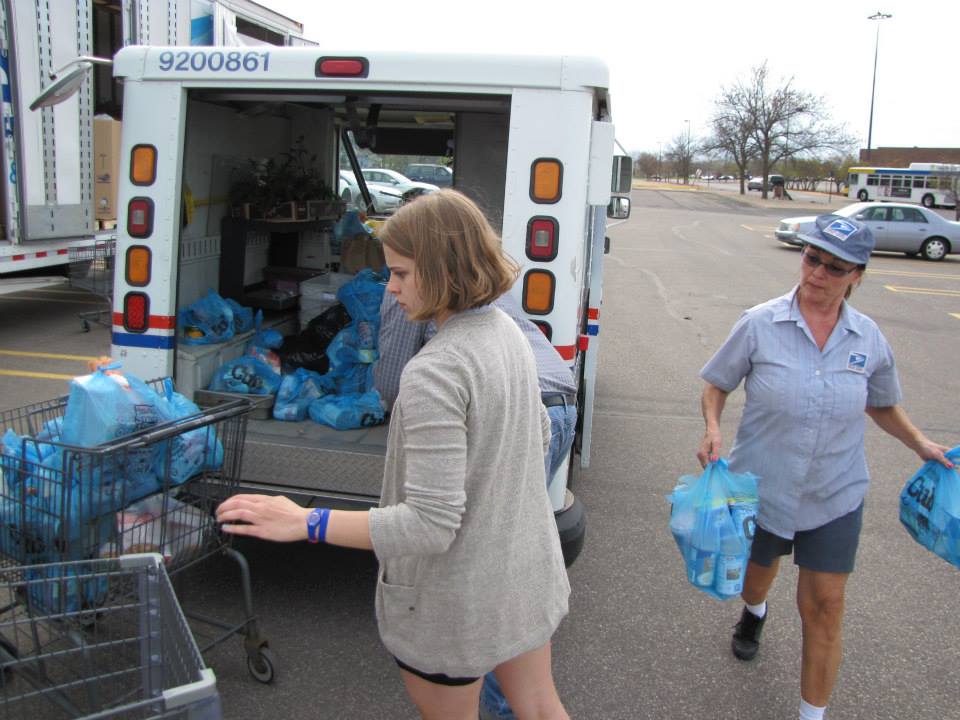 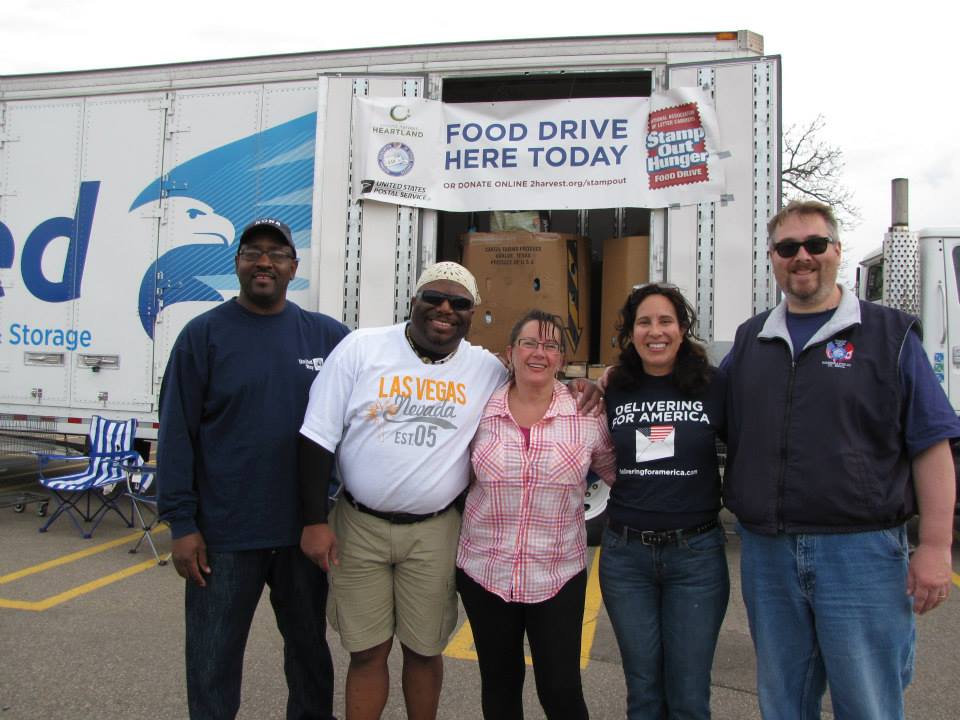 They worked with volunteers from Hedberg Moving, one of the Minnesota Transport Services Association member firms which provided trucks for the NALC food drive at selected Cub Foods locations.

“It was really fun,” said Danielle Hedberg, who was joined by several family members. “We were glad to be part of it and glad for the support of the Blaine and Ham Lake Community.”

People also could make a monetary donation to Second Harvest Heartland, whether by check or cash or online (www.2harvest.org). TCF pledged to match up to $25,000 of the online donations, which totaled $33,982 as of May 15.