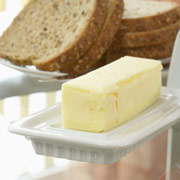 Minnesota has butter. The Norwegians have cod. Can’t we work something out?

In case you missed it, the Norwegians got themselves into a mess during the holiday season by running short of butter.

Norwegian trade laws make imports of food commodities difficult to access and expensive for Norwegian homemakers, bakers and restaurateurs. Swedes and Russians have been caught trying to smuggle in butter for an emerging black market.

On top of that, dairy production is down due to unfavorable weather and growing conditions. Combine this with a low-carb, high-fat “fad” diet that has swept the Nordic country, greatly increasing demand for butter and cream, as former Minnesota 2020 health care policy associate and now our cultural correspondent from Oslo, Nina Slupphaug reports.

“Not our proudest moments,” she said.

We have a large number of Norwegian-American dairy farmers in Minnesota who wouldn’t object to helping out their cousins in “the old country,” observes Minnesota Agriculture Commissioner Dave Frederickson. Perhaps a little bench trade, like we used to do with countries that didn’t have exchangeable currencies, he said. “Let’s swap a few tons of butter for a comparable amount of cod.”

In fairness to Frederickson and non-Minnesota born readers of this blog, we’ll admit this wasn’t the most serious interview Frederickson has granted since becoming Ag commissioner a year ago. But he can commiserate about shortages. Restaurants all over Minnesota have stopped offering torsk, a thick-cut fillet of cod partially poached and then broiled that many consider a culinary equal of lobster.

Here’s where our butter advantage might help. Minnesota-based Land O’Lakes is the largest branded butter company in the country, and AMPI has one of the nation’s largest butter manufacturing plants at its home base in New Ulm.

In addition, Plainview Milk Product Corp. at Plainview and Hope Creamery Inc. at Hope are butter makers, and 11 other USDA-inspected dairy plants have packaging operations that could ready shipments for Norway.

Minnesota dairy processors are now more engaged in making cheeses, explains Sherry Newell of the Midwest Dairy Association. At the same time, butter is still a sweet business for the Minnesota dairy industry.

Meanwhile, the Norwegians know their fish. The Norwegian Seafood Council reported on Jan. 4 that worldwide exports of groundfish, or bottom dwelling fish such as cod, increased 7 percent to a record $188.2 million last year. China, Brazil, Portugal France and Spain stepped up purchases.

Butter and torsk go together like butter and, well, everything, but especially potatoes and dill, or cream sauce in Norway.

It might be time for cross cultural exchange once again.