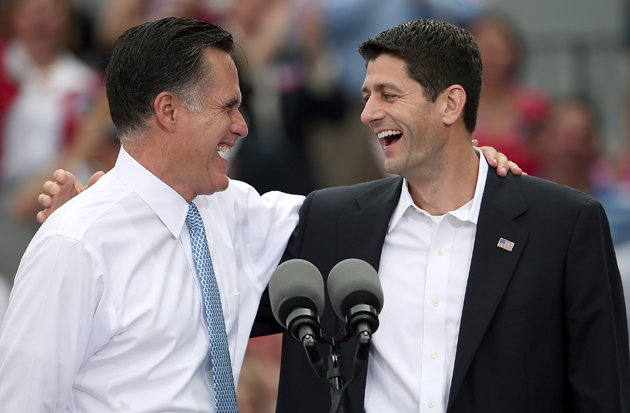 Chicago, IL — Still reeling from negative reaction to his comments on the night the U.S. embassy in Libya was attacked and even more so from his secretly-taped declaration that 47 percent of the American electorate is made up of people who will never be willing to take responsibility for their own lives, Mitt Romney today tried to put out another raging political wildfire. This time it is fallout among his base following reports that Romney and his Vice Presidential running mate, Paul Ryan, announced their intention to get married on Inauguration Day.

According to news reports, the announcement was made during a joint appearance by the two men at a rally in Florida earlier this month. (see “Romney and Ryan Make it Official: Big date set for January 20, 2013,” https://www.tcdailyplanet.net/partners/ground-zero).

At a hastily called press conference today, Romney characterized those reports as “rumors” and “deliberate falsehoods” circulated by “sissy undercover operatives too cowardly to step out of the closet and identify who their real sugar daddy is.”

“I never said I was going to marry Paul,” Romney told reporters. “Gosh, I don’t even believe in gay marriage. Neither does the Boy Scout.” Boy Scout is, reportedly, Romney’s pet nickname for Ryan who reportedly refers to Romney by the nickname “Big Stiff.”

When asked why Ryan was not present at the briefing today, Romney explained that his running mate was off making an impromptu campaign appearance in the steam room of the Lincoln Park YMCA. “He likes to keep himself buff by working out,” Romney explained. “He thought he’d swing by there and see if he could get our campaign a little goose from his fellow exercise fanatics.”

During today’s briefing, a grim-looking Ann Romney stood just upstage from her husband, taking sips of some liquid from time to time from an opaque water bottle. The only time her mood lifted was when she appeared to guffaw at Romney’s declaration, “I am not gay. I have never been gay. I love my wife. I love my children.”

Romney’s denial flatly contradicts videos and sound recordings picked up by several media outlets of comments both he and Ryan appear to have made during their joint campaign appearance on September 4. During that appearance, Ryan reportedly denounced Barack Obama as a “breeder” in addition to the standard list of epithets conservatives apply to the President, like “looter,” “moocher,” and “secret Muslim socialist Nazi.” The Vice Presidential candidate and Republican Senator from Wisconsin, also reportedly said that, if elected, he and Romney would build a log cabin for themselves on the grounds of Camp David.

Pressed about these videos and recordings today, Romney responded, “I don’t remember what I said that day, but whatever it was I’m sure I agree with it – except for that made-up part about me and Paul getting married.”

Questions about the announcement are especially problematic for the GOP candidates because of the party’s fierce opposition to gay marriage. Asked whether concern over that stand prompted today’s denial, Romney winced and seemed to wipe something away from his eye before saying, “Paul and I are just good friends, nothing more. Gee whiz, nothing’s gone on between us but the kind of good natured horseplay a lot of guys indulge in. He’s just frisky, that’s all. Is there supposed to be something wrong with that?”

Even in the wake of today’s denial, political experts do not believe Romney has put questions about his relationship with Ryan to rest. They have been joined by a chorus of voices from conservative commentators. In his daily blog, Weekly Standard editor William Kristol wrote, “Romney can get right down on his knees and beg for it, but his conservative base just isn’t going to give him what he wants.”

Radio personality Rush Limbaugh was even blunter. He declared that “Romney’s toast. He might as well pull down his pants and grab his ankles because he’s got it coming. That’s right, my friends. Bend over and grab his ankles because he’s really got it coming. And believe me — I know exactly what that feels like! It’s going to hurt at first, but he’s going to have to get used to it.”