Good news: the deficit supercommittee looks set to fail. Yes, I see the stock market is down a bunch today. I don’t care. Failure is good. Sometimes, a bad deal is better than no deal. This isn’t one of those times.

Technically, the deadline is Wednesday, but in practical terms, they need a couple days for the CBO to score it. However, as we saw with that horrific debt ceiling negotiation, the practical deadline can get pushed back when a deal is close. That’s why I’m writing this, in hopes of encouraging congressional Democrats to see that not only is failure an option, it’s the best option. In fact, it’s not a bad option at all. Well, OK, a better option would be a deal where the Republicans accept that upper income taxes have to go up, but the odds of reality breaking through to Republicans are similar to fairies breaking through to reality.

And the “do nothing” part of the headline? Not only should the supercommittee be allowed to fail, but if all current policies are left in place, the deficit is close to gone. There are negative consequences to that certainly, but just taking the deficit by itself, inaction is the best action. With a hat tip to TPM, a chart to illustrate this (click to enlarge): 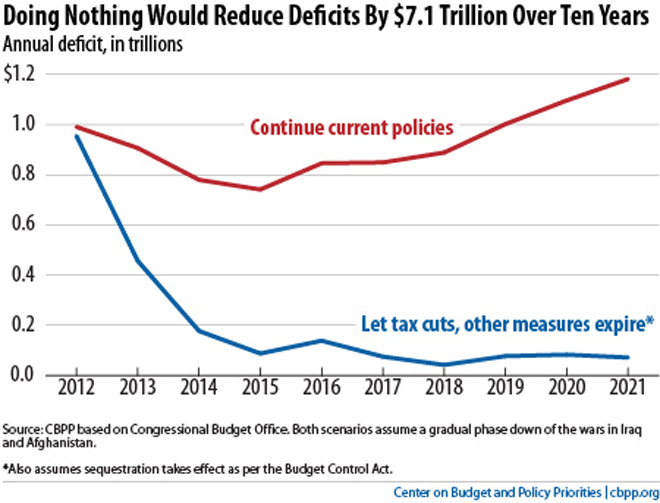 How can failure be good? The triggers that were part of the debt ceiling deal supposedly were so awful, both parties would have a huge incentive to compromise. Two things this misses. One, as reluctant as Democrats are to cut entitlements, a very justified reluctance in policy terms, the trigger is cuts to Medicare providers. Providers won’t like that, but one of the reasons US medicine is so expensive is we simply pay more to providers than other countries do. Every single-payer advocate can reel off the statistics, that we pay double per capita of anyone else for health care, and private insurance has about 25% overhead, while Medicare and foreign systems are in the low single digits. That always bugged me. Take out excessive insurance overhead, and we still have a lot of excess costs to explain. Can it all be a bad system? I always doubted it. I’m not looking to make life harder for doctors or hospitals — but they do get paid noticeably better than their foreign counterparts, and if we’re to get costs down, these sorts of cuts probably have to happen.

That’s one thing the belief the supercommittee would be bound to compromise misses. Number two was the assumption Republicans were so anxious to protect defense spending, that to protect it, they’d finally get over their taxophobia. Whoever thought that is still thinking in the Cold War, when fiscally conservative Republicans raised taxes and sometimes were even the ones who pushed for increases, but defense was sacrosanct. That’s not modern Republicans. That assumption failed to understand how taxophobia is so deep in Republican bones that it pushes aside the marrow.

From a Democratic point of view however, at least a liberal, non-Blue Dog Democrat point of view, defense is bloated, needs cutting, and is damn near impossible to cut. Cuts in defense are second only to upper income tax increases in terms of what has to be done to fix our fiscal problems. So from this point of view, failure means Medicare cuts that had to be made sometime with defense cuts we’ve been wanting a long time. And the bad part is? Actually, there’s another good part. Republicans have shown they prefer to protect the pockets of the richest people even at the cost of making defense cuts they have always claimed would endanger the safety of the nation. Think we can do anything with that in a campaign?

Republicans on the supercommittee have been unwilling to make tax increases, but were open to closing loopholes — if the Bush tax cuts were made permanent. They agreed to save about $300 billion in loophole closing in exchange for more than double that in tax cuts for the top. “You agree to drink this poison, and I’ll agree not to close the toilet lid while you’re vomiting. I prefer closed lids, so that’s quite a sacrifice on my part.” Which gets back to the chart above.

The Bush tax cuts expire at the end of next year. The wars are scheduled to wind down. Stimulus spending will end soon. Those things pretty much are the deficit. There’s not much left as those things come to an end. No non-stimulus domestic spending need be cut.

The downside is people in the middle and bottom will be hurt too. It’s not just the 1% paying more taxes and defense getting cut. Unemployment insurance extensions end this year and unemployed people will be seriously hurt if they aren’t continued. I supported the extension of the Bush tax cuts last year, despite bewilderment that the administration kept justifying it on the grounds of saving the middle class tax cuts, because ending extensions would cause terrible hardship for long term unemployed. I consider it paying the ransom to get back the hostage. Maybe Republicans will make the same demand. I hate to say we let them metaphorically shoot the hostage instead of giving in, because we’re talking about real people.

There are also the Obama tax cuts, not just the middle class Bush tax cuts Democrats are willing to continue. Those were targeted toward the middle and bottom, and their end will hurt. On the other hand, other than the payroll tax holiday, they’re about the least effective form of stimulus, only upper income tax cuts being less so. On a macro level at least, I’m not convinced their expiration will hurt other than, again, the payroll tax holiday. Actual stimulus spending, as opposed to tax expenditures and tax cuts, has pretty much ended already, and the odds of getting more, much as we need it, about the same as Herman Cain’s odds of becoming ambassador to Libya. “Hasn’t the new ambassador to Libya arrived yet?” “He’s trying to find the embassy — we heard he’s in South America somewhere.”

So other than the unemployment insurance extensions, and to a degree the payroll tax holiday, what do we lose by letting everything that’s winding down or expiring run its course? So far as I can tell, all we lose is our deficit. So let the supercommittee fail, let the extension of the Bush tax cuts fail, let it all fail. If Republicans won’t see sense about the need to create jobs, then do nothing.