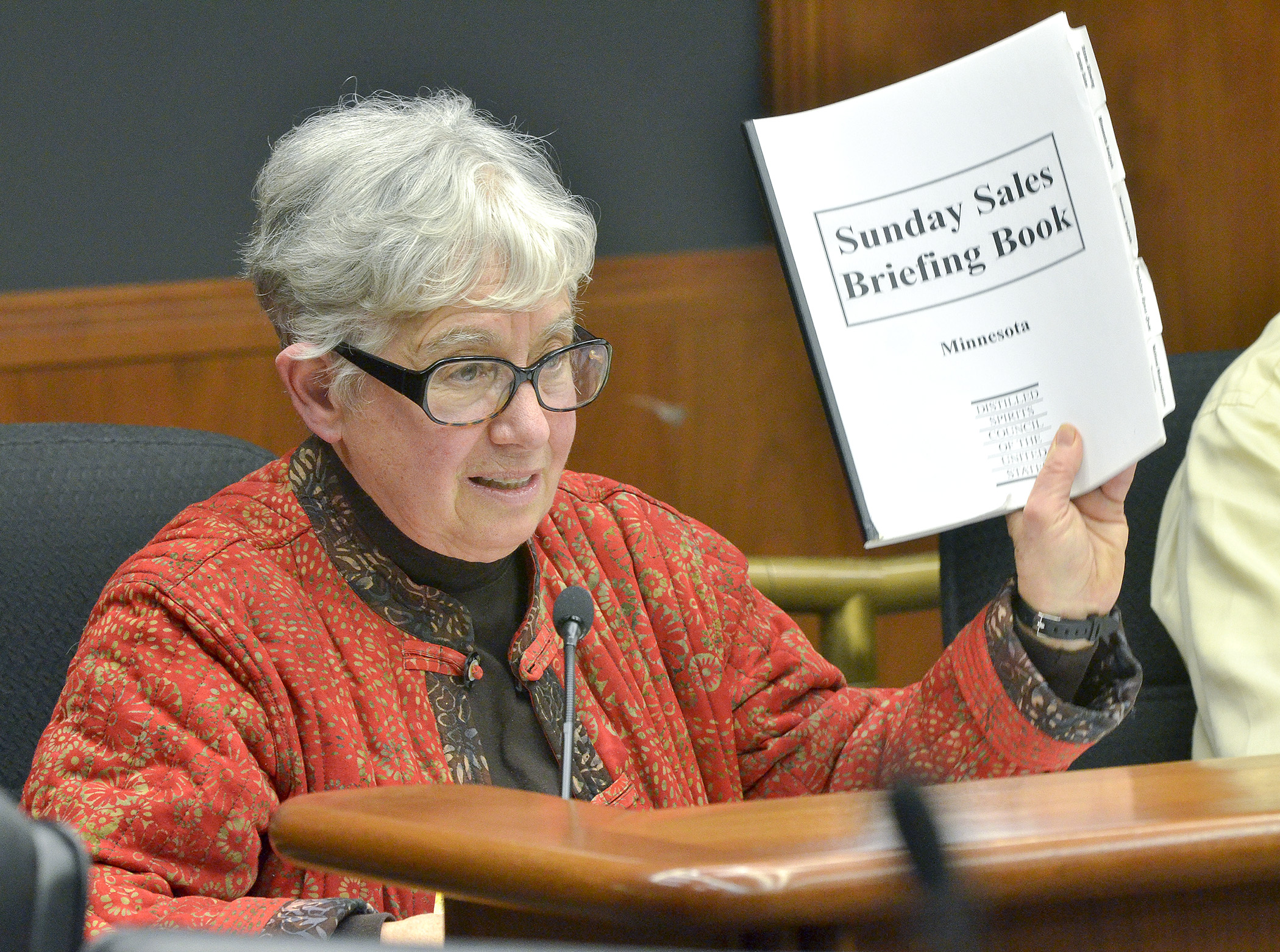 Rep. Phyllis Kahn shows a Sunday Sales Briefing Book to members of the House Commerce and Consumer Protection Finance and Policy Committee Wednesday during an informational hearing on a bill that would repeal Minnesota’s Sunday off-sale liquor sales prohibition. (Photos by Andrew VonBank.)

With the rise of craft breweries, small wineries and micro-distilleries, some Minnesota legislators have been working to make the state more liquor friendly.

The so-called “Surly bill”, passed in 2011, allowed microbreweries to open on-site taprooms for tasting events and selling beer. Alcohol can now be served at certain sports stadiums, nonprofit events, bed and breakfasts, festivals and airports, too.

“We started to educate ourselves more about the liquor industry,” he said.

In addition to bringing jobs to the state, Atkins said wineries and breweries have become tourist attractions.

This year’s omnibus liquor bill, HF746, includes provisions that would allow micro-distilleries to provide samples of distilled spirits, and licensed wine or beer educators to purchase and serve wine or beer for educational purposes.

Minnesota’s reputation for having some of the strictest liquor laws isn’t a recent revelation.

Apart from a 1967 update that allowed restaurants to serve alcohol on Sunday, many of the core regulations governing the manufacturing, distribution, retail sale and consumption of alcohol beverages date back to the state’s territorial days in 1858 and 1933, the year prohibition officially came to an end.

Even before prohibition took effect, 63 of the state’s 86 counties were considered “dry” or free from alcohol sales, according to an Anti-saloon League book published in 1920. But at the time, Minnesota also had 37 breweries producing over a million barrels of fermented liquor, according to the Minnesota Historical Society.

The act that outlined the federal enforcement of prohibition carries the name of U.S. Rep. Andrew John Volstead from Granite Falls, too.

Still no liquor sales on Sunday

Although legislators continue to work on bills to foster the growth of small liquor-related businesses, two consumer issues remain: Minnesotans are still unable to buy off-sale liquor on Sunday or wine at grocery stores.

Andrew Schmitt, director of Minnesota Beer Activists, a group made up of mostly consumers, said prohibiting Sunday liquor sales is a major obstacle because it’s one of the busiest shopping days of the week. Many polls also show that most Minnesotans support Sunday off-sale liquor sales.

“(Legislators) should be on board,” he said.

Rep. Phyllis Kahn (DFL-Mpls) is one of few legislators who support the idea. For years, she has prided herself on having the “wettest” voting record but the “driest” lifestyle. Once again, she is sponsoring HF521, to allow off-sale liquor sales on Sunday, Thanksgiving and Christmas Eve — a bill that she admits is not all that popular among legislators.

During a hearing of HF521 at Wednesday’s House Commerce and Consumer Protection Finance and Policy Committee meeting, Rep. Linda Slocum (DFL-Richfield) spoke against the bill. She cited calls she’s received from both private and municipal liquor store operators, who say they’ll lose money.

“It’s not about not liking liquor stores,” she said. “I want to do what’s right.”

Rep. Andrew Falk (DFL-Murdock), on the other hand, questioned why liquor is any different from other products sold on Sunday.

Atkins, who chairs the committee and has not included HF521 in his omnibus liquor bill, said in an interview that consumers just don’t feel as strongly about the issue as small liquor store owners.

While most consumers say it would be convenient, “when you ask the small store owners if they oppose it, it’s an overwhelming no,” he said.

Despite opposition, Kahn remains passionate about allowing off-sales on Sunday.

In addition to bringing additional new revenue to the state, she said her bill is also about removing the last of the Blue Laws, which are designed to enforce religious days of worship or rest. 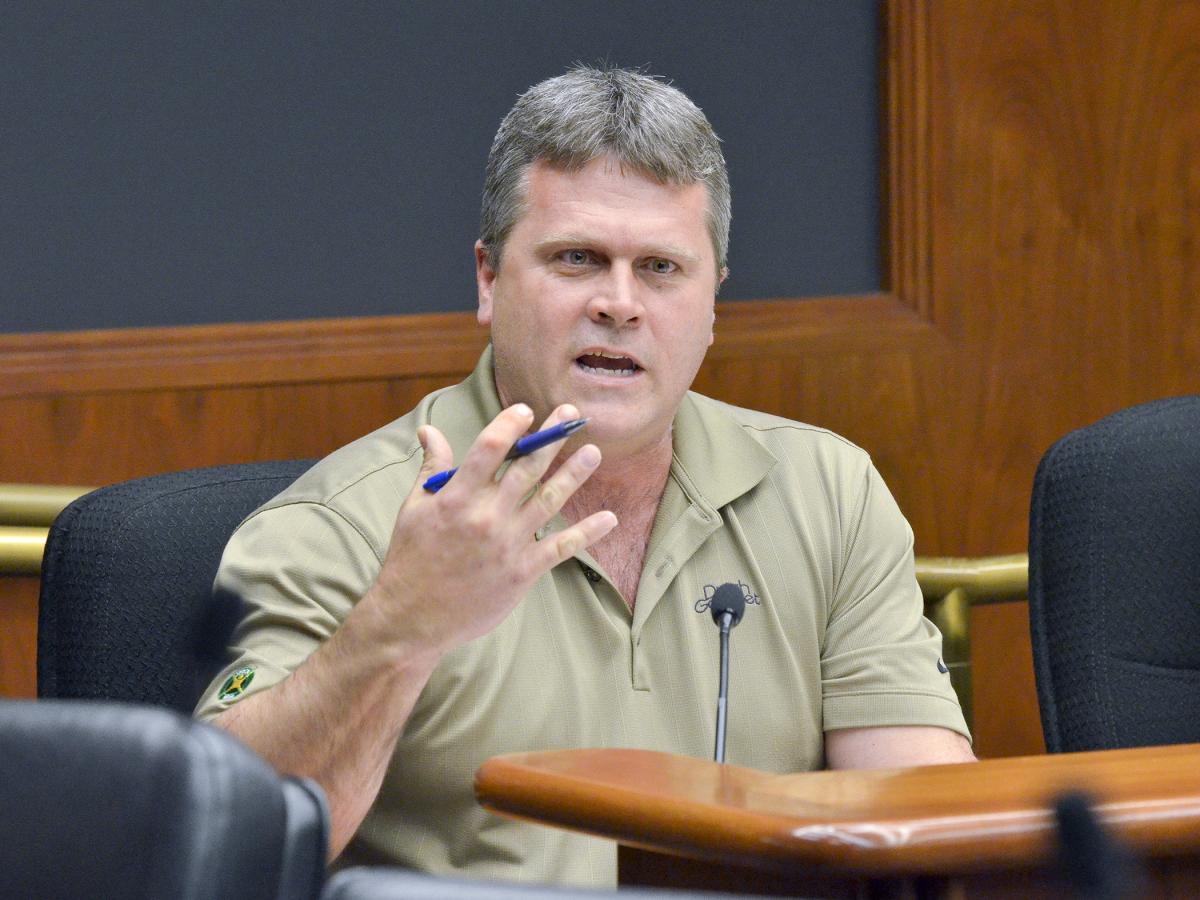 Coined by Puritans in the 1700s, Blue Laws were once commonplace throughout the country. In 1967, Minnesota enacted laws prohibiting the sale of a slew of products from musical instruments to home furnishings on Sunday. With the exception of liquor off-sales and automobile sales, Minnesota overturned most of those laws in 1971.

But today, Cathy Pletta, manager of a municipal liquor store in Kasson, a city near Rochester, said prohibiting liquor off-sales on Sunday is no longer about preserving the Christian day of rest.

“I’m opposed not because I want a day off,” she said. “It’s just economics.”

Pletta is among many liquor store operators against the bill. She said changing the law will spread six days of sales over seven days of operating costs. While proponents argue that Sunday is a big shopping day, she said people don’t go to the liquor store to browse and that it’s a planned purchase.

“People are not going to drink more,” she said.

No wine in grocery stores

While HF521 is not likely get out of committee this session, a provision to allow wine sales in grocery stores has even less momentum.

Kahn said she decided not to include the provision in the bill because she didn’t want to get the two issues confused. However, she believes allowing wine in grocery stores would give smaller stores a better chance to compete with bigger chains that have the funds to build a separate liquor store next door.

Al Pierson, owner of Al and Laura’s Foods, a small town grocery store in Fertile, supports the change, saying wine would be a big money maker.

“It would be a great impulse buy,” he said.

But he’s also aware of the strong opposition coming from liquor stores operators. Rather than wait for the law to change, Pierson decided about six years ago to build an adjacent liquor store instead. While it was a more expensive option that required an extra employee and a separate entrance, Pierson said the draw is he can sell everything including beer and hard liquor.

“I regretted it the first two years I owned it,” he said. ”It’s been a learning process.”

Pierson said he would still like to be able to offer wine in his grocery store. The only potential issue would be the possibility of the wine getting in the hands of his employees, most of whom are under the legal drinking age.

Charlie Anderson, owner of a small grocery store in Blackduck, who also employs mostly teens, agrees. He said the risk of wine getting into the hands of his underage workers is more trouble than it’s worth.

“I don’t see it as being a big money maker for me,” he said. He argued that since bigger chains could offer a larger selection, allowing wine sales would make it more difficult for him to compete.

In a broader scope, the resistance among legislators and store owners like Anderson isn’t just limited to liquor off-sales on Sunday or wine in grocery stores. Changes are also sought unsuccessfully for other liquor-related laws too, particularly those concerning distribution by brewpubs.

However, Schmitt, with the beer activist group, is hopeful that a law to allow liquor off-sales on Sunday might help clear the way for other liquor-friendly laws.

Read more on the subject: