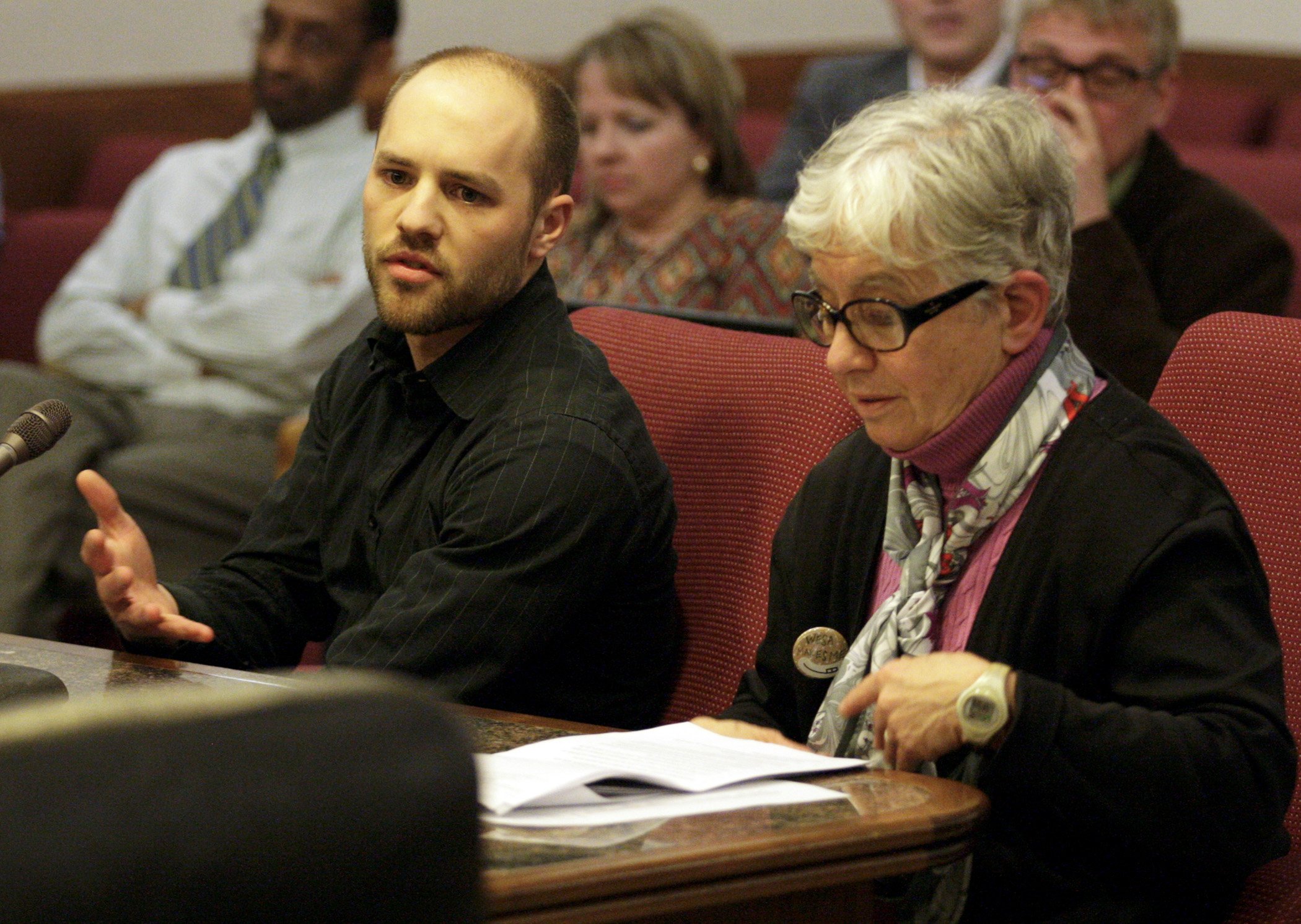 Mike Danielson, event producer at EideCom, testifies against Rep. Phyllis Kahn’s bill, HF1620, which would prohibit the use of drones in certain cases. (Photo by Paul Battaglia)

Drones may be among the latest buzz in technology, but determining how and if to regulate them has created nearly as many questions as answers.

A trio of bills heard Tuesday by the House Public Safety Finance and Policy Committee tried to resolve some of the issues.

According to an April 2013 Congressional report, the Federal Aviation Administration has predicted that 30,000 unmanned aircraft could be flying in skies over the United States in less than 20 years.

Calling the issue of drone regulation a work in progress, Rep. Michael Paymar (DFL-St. Paul), the committee chair, said the hearing was a way to get the discussion going between proponents and opponents.

“I appreciate the value of technology like this, but I also see some privacy issues,” said Rep. John Lesch (DFL-St. Paul).

He sponsors HF2552 that would restrict the use of drones — or unmanned aerial vehicles — by government entities unless a search warrant has been authorized prior to their deployment, or without a search warrant “in an emergency situation that involves an imminent threat to the life or safety of a person.”

The bill, re-referred to the House Civil Law Committee, would also create a civil cause of action for aggrieved parties. It has no Senate companion.

“Drone technology brings with it many opportunities, from more affordable ways to gather information for traffic reports to more efficient ways to count deer in a forest,” according to a statement from the American Civil Liberties Union of Minnesota. “Unregulated, however, warrantless drone operations could interfere with Minnesotans’ reasonable expectation of privacy, chill First Amendment-protected activities, and lead to discriminatory targeting.”

It would prohibit law enforcement agencies from using a drone to gather evidence or other information on individuals, except to counter terrorism, in cases where a search warrant is obtained and in emergency situations. Evidence collected in violation would not be permissible in a court of law.

“I just believe there should be a search warrant for evidence gathering,” Johnson said. “Law enforcement is looking for guidance.”

Rep. Dan Schoen (DFL-St. Paul Park) said the bill is a starting point for further discussion, “but I’m not convinced this is the right way to go.”

The same could be said for the general consensus on HF1620.

Sponsored by Rep. Phyllis Kahn (DFL-Mpls), it would make it a felony to use a drone to capture images of a person without that person’s permission. It would also prohibit law enforcement agencies from using a drone to gather information in an investigation and prohibit a federal agency from using a drone in Minnesota.

Because cameras can be so small, this would be almost unenforceable, said Rep. Tony Cornish (R-Vernon Center).

Charles Eide, founder and CEO of EideCom, a company that includes aerial cinematography among its services, called Kahn’s proposal a “job-killing bill that eliminates the freedoms of commercial photography, art, science, technology, film and many more industries.”

Mike Danielson, the company’s event producer, wondered how drone photography is any different than manned aerial photography. In part, Kahn said drones can get much closer to the ground.

The reason this is on the table is because drones are on the public radar now, Lesch said.