If you think of my brain as a refrigerator, then all the food stories that I haven’t had time to write about are like left-overs, sitting there in takeout containers, and not getting any fresher. So, it’s time to clear out the fridge…

We had a great dinner the other night at Sun Street Breads, which recently started serving dinner. I ordered Gloria’s shellfish stew ($18), brimming with mussels, clams, shrimp and cod in a spicy smoked paprika tomato broth, with the chorizo on the side so Carol could eat it, too. Carol ordered the Shorewich, a big fillet of moist and delicate cod, breaded in cornmeal, deep-fried, and served in bun with lots of coleslaw and tartar sauce ($11). Theoretically, it’s a sandwich, but it was so over-stuffed that there was no way to lift it without making a huge mess, so we ate most of it with fork and knife. Delicious. 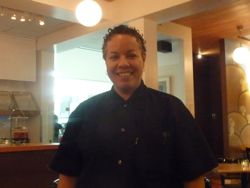 The added treat was seeing Sun Street’s new chef, our old pal Annette Colon, formerly chef de cuisine at Lucia’s Restaurant. Annette pays tribute to her Puerto Rican roots with a starter of crisp tostones, served with a lively pineapple mojo. There’s lots more on the menu I’d like to try, including the salt roasted chicken with bread pudding, black eyed greens and bourbon sauce ($16), and the short rib pot roast with potatoes and veggies ($17).

Another recent highlight was the ramen noodles at Unideli, the little deli inside United Noodles, 2015 E. 24th St., Minneapolis. (I know, I write about this place a lot. It’s cheap, it’s good and it’ near my office.) 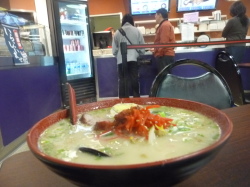 You have had ramen before, but you haven’t had ramen like this before. Unless maybe in Japan. United Noodle’s new Japanese chef, Kozuke Zaworski, makes the soup stock from scratch, boiling pork bones for hours to produce the intensely flavorful broth. To this he adds ramen noodles, bean sprouts, slices of barbecued pork, pickled ginger and a soft-boiled egg. The broth is intensely flavorful, and the noodles have a firmer, more satisfying texture than the instant kind. (Which you can find in a zillion different varieties in the grocery section at United Noodle.) The deli is open Tuesday through Saturday from 11 to 6, and Sunday from 11 to 5. 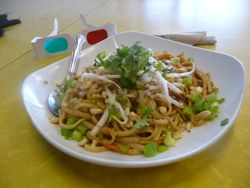 I’m also a fan of Galactic Pizza, the environmentally conscious pizzeria at 2917 Lyndale, but I never knew that they also served pasta, until the other day, when a sign outside the door caught my attention: Lunch Special Every Day 11 – 3 p.m. $5 Pasta Bowls. The menu offera choices of linguine with Alfredo, a vegan penne Bolognese or penne with vodka sauce, (all regularly $8.75-$8.95) but I opted instead for the Thai peanut linguine, tossed with bean sprouts, green onions, peanuts and cilantro in a smooth peanut sauce enlivened with a sprinkling of hot pepper. Light, simple and very tasty.

The portion was just right for lunch, Not the only deal they offer – during happy hour, appetizers are half price, and local beers are $2 a pint – a steal for brands like Flat Earth and Surly’s, that can cost up to three times that much elsewhere.And on Monday nights, a pint of Grain Belt Premium is just 50 cents (limit four to a customer, with qualifying purchase.)  Between 4:10 and 4:30 daily you get $4.20 off of any orders for pick-up or delivery only.