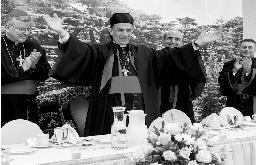 St. Maron Maronite Church parishioners and their priest, Reverend Monsignor Sharbel Maroun, recently enjoyed a very hectic September at their church, 602 University Ave. NE. On Sept. 13 and 14, they hosted Beshara Peter Rahi, the much-loved Lebanese Patriarch who is one of the Maronite Catholic Church’s highest officials. Celebrations included a Saturday night banquet, Sunday liturgy and brunch in his honor; each event drew more than 400 people.

“He is the highest church authority to ever visit Minnesota,” Maroun said. “His visit was incredible for the community.”

While that might have seemed like an unprecedented whirl of activity for the parish, according to Maroun it was nothing, compared to the Patriarch’s own international travel itinerary in August and September.

“He was on the run, practically 24 hours a day,” Maroun said. Rahi’s August trips included Iraq, Lebanon and Rome, “where he called for solidarity by Christians in the Middle East, and not by force.”

With four other Patriarchs from Lebanon, Iraq and Syria, Rahi attended the “Defense of Christians” Summit September 9-11 in Washington, D.C. Maroun said the event had 45 speakers and 18 Congressional representatives. On the second day, the Patriarchs met with President Obama. “It was the first time that the Patriarchs had had a chance to sit with the President of the United States and tell their story. They asked that Lebanon be defended against ISIL terrorists,” Maroun said. (ISIL stands for Islamic State in Iraq and the Levant; the Levant includes Lebanon.)

On September 12, Rahi was on the move again, visiting a Maronite parish in Alabama. He arrived in the Twin Cities on September 13, visiting the Holy Family Church in Mendota Heights (a Maronite church) first, and arriving at St. Maron Catholic Church in time for the 6:30 p.m. banquet in the church’s Cedar Hall.

“His message to us was that we need to support Christians with prayer, money, and in politics. He greeted almost everybody individually. At 11 p.m., he was still here,” Maroun said. The next day there was a full house in the church for mass, and the brunch which followed. After that, Rahi rushed back to the airport to catch a flight to Cleveland.

Maroun said that Rahi is “probably the strongest voice in the Middle East today, calling for peace, co-existence, and equality among people. He believes in the dignity of the human person. He has some enemies, but many friends; 20 million Christians throughout the Middle East look to him as the voice of courage. His voice is spiritual, religious, and political at the same time.”

Lebanon is an independent country, Maroun added. “Only in Lebanon does the Patriarch have the right to say what he wants to say, without being jailed. He called for Christians to stand strong and remain in the area where the gospel was written. We are the original people in the Middle East.”

At St. Maron, the Patriarch addressed the crowd in Lebanese and Arabic. The Vicar General, who traveled with him, translated his remarks into English. About 60 percent of the people who attend St. Maron speak Lebanese, Maroun said, adding, “We have a very unique parish, with Lebanese, Syrian, Egyptian, Jordanian and Turkish people here. All of the Middle East has a connection to this parish, plus we also have Irish, Germans and Italians. Twenty percent of the parishioners live within a few miles; there are others who drive 40 minutes to get here.”

Maroun said he was very surprised at the banquet, when Rahi announced Maroun’s elevation to the status of chorbishop, a rank in the Maronite church that is just below bishop. “It was a very great honor,” Maroun said. “But the night was supposed to be about the Patriarch and his trip. When he started speaking about me, I felt kind of embarrassed.” Maroun said that September 13 was a significant date for him, because it marked his 25th anniversary in Minneapolis.

Maroun emigrated in 1983 from his home town near Beirut. “My two sisters, mom, and my brother are still there. I was in Lebanon three weeks ago. It is safe, provided you are not on the eastern side, where the war rages between ISIS and the Lebanese, and not on the northern border between Syria.”

“My fear [every time he visits] always is the airport closing. I lived through eight years of civil war in Lebanon. It became routine. When I came to the States in 1983, I lived here for three years before I went back to Lebanon. In middle of the night, two rockets were fired toward my neighborhood. There was fighting going on four blocks from home. I was scared to death. I ran to our shelter on the lower floor, but my family was not there. They were on the balcony, watching the rockets like they were watching a movie. They said, ‘If we’re going to die, we’ll die here, not in the shelter.’ The shelter had been built years ago, it could not withstand today’s rockets, which can go through 10 stories of a building.

“Another time, I was at a restaurant when the shelling started,” Maroun said. “I looked out and there was nobody on the streets. Half an hour later when the shells stopped, the streets were like normal life. Everybody was out. It was like in Minnesota, when we have severe weather. Everybody goes inside for awhile, then they come out.”

Lebanon’s civil war started in 1975 and lasted 16 years, until 1990. Recently, the country has been affected by the civil war in Syria, which has brought many Syrian refugees to Lebanon. “Every second or third car has Syrian license plates,” Maroun said.

Maroun said that the St. Maron parish has grown and changed since 1999. The church and rectory have both been replaced with new buildings and Cedar Hall, a for-rent banquet center in the new church complex, has proved popular. More than 200,000 people have attended wedding receptions, banquets and parties in the hall since it opened. The parish owns a senior residential building, the Peter Nasseff Home, which lies west of the church. Recently, St. Maron acquired a four-plex on neighboring land, and also owns several nearby houses which its rents out.

“Through His grace, we have accomplished a great deal,” Maroun said.