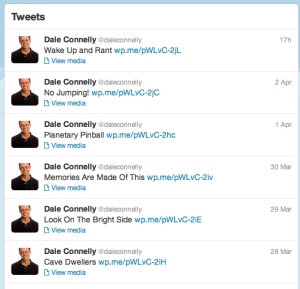 If you have not yet begun to Tweet, doing so may be your one remaining shot at immortality. If you don’t mind being immortal in a crowd.

It turns out all the tweets ever tweeted will be archived by the Library of Congress. One blogger connected with the New York Times said “the library has attached itself to the firehose.”

An open, gushing firehose running into a library? That doesn’t end well.

Best of luck to the Librarians of Congress as they address the monumental task of keeping up with the flow, and Godspeed to the historians of the future who will wade into this vast ocean of data to locate a meaningful pebble. By one estimate, the library has already absorbed over 130 billion tweets.

On the plus side of that equation, I now feel a little better about the condition of my basement.

People are already worried that the things they say and do online will inadvertently be remembered forever. And people do post surprisingly revealing things in places where anybody else can see them. Whenever I stumble across an embarrassingly personal photo or an unusually thorough and detailed confession, I say to myself “Here’s someone who has decided they do not want to be anybody’s first grade teacher. Ever.”

And there are plenty who fit that description.

And now to give such people a second chance at teaching the littlest tykes, there comes a web service called “Snapchat“. Material posted using this thing is literally designed to disappear after a short time in existence. You can share your less-than-flattering I-just-out-of-bed picture to all your friends confident that, like the taped instructions delivered in every episode of “Mission Impossible,” it will self-destruct.

But can something that promises to leave without a trace really be counted on to vanish? Does anything in the digital world go away? I can’t help noticing that all those smoking Mission Impossible recorders, supposedly gone to the great smoldering beyond, are still around for your viewing pleasure, on Youtube.

What item of yours is gone forever now, and happily so?