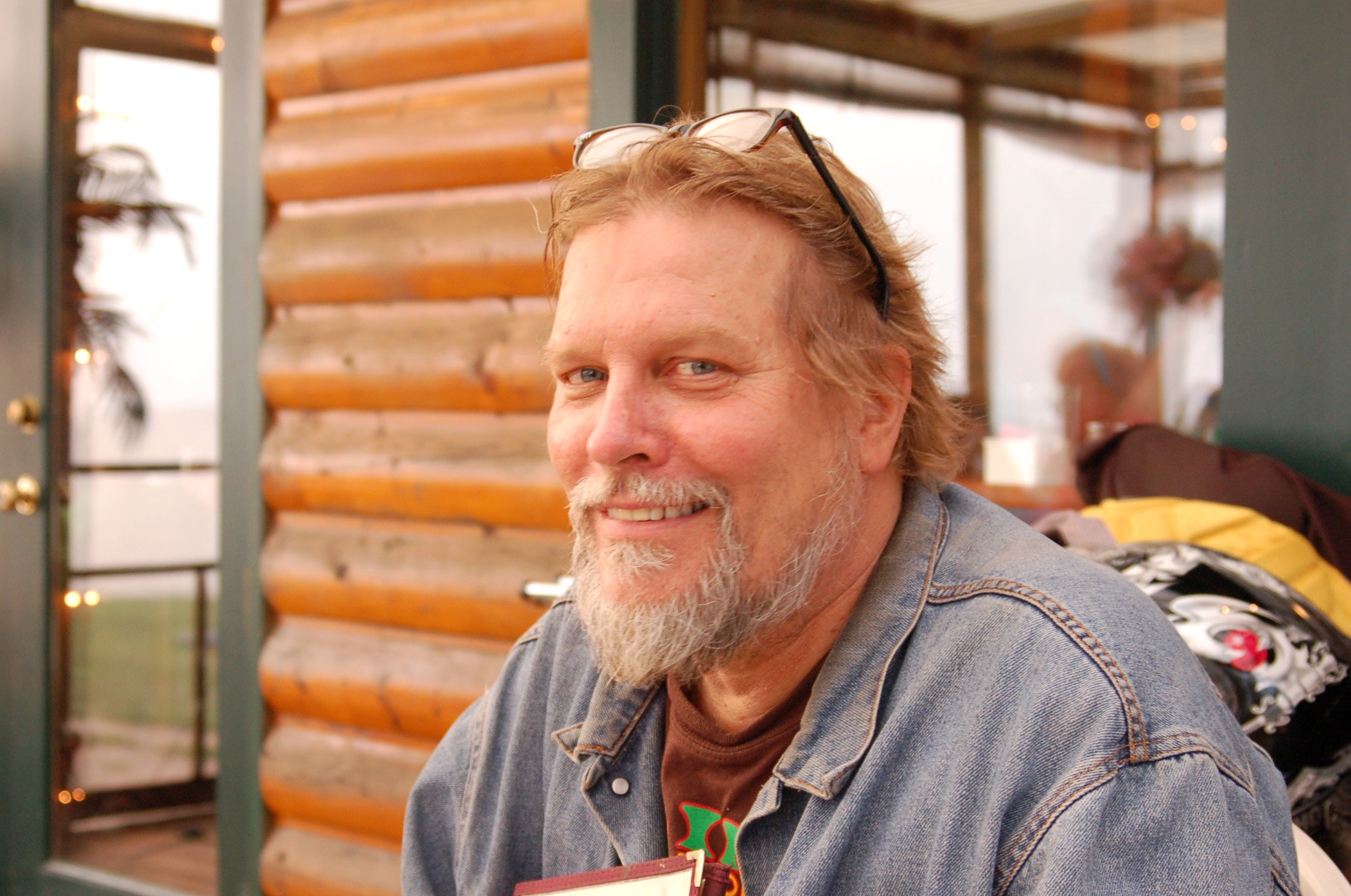 Leather biker jackets far outnumbered suits and ties while motorcycles—ranging from scooters to rare classics—crowded cars out of the chapel parking lot as about 150 people gathered Saturday, September 28, to remember the life of Thomas E. Dale.

Known as Tom the Tailor around Dinkytown, Mr. Dale died of an apparent heart attack in his sleep Tuesday night, September 24, 2013. He was 63.

“It’s way too early for someone so vital to go,” said Michael Trittipo, a neighbor and friend. “It’s just such a big loss for the community. Tom knew everybody, and he was always helping out, like helping out with the Girl Scouts when they needed a leader.”

Local residents remember Dale as a businessman, a leather artist, and motorcycle rider and would not necessarily think of him as a Girl Scout leader, Trittipo said.

At his memorial, though, several tearful young women in their late 20s mourned the passing of Dale, whom they described as a “second father.”

One of them, Lindsay Moody, whose mother was a scout leader with Tom, recalled selling Girl Scout cookies. “I remember that Tom always sold ten times as many cookies as anybody else because he knew so many people,” Moody said.

Tom Dale’s daughter, Kaycie Dale, spoke at the visitation and recalled activities and road trips they did together.

Tom Dale worked as Tom the Tailor for 34 years and six months, from April 1979 until his death. He was often quoted by the Minnesota Daily and other publications on the changes and business climate of Dinkytown. Last winter, I spoke with him for a Twin Cities Daily Planet series on development in Dinkytown.

For about 25 years, Tom the Tailor worked in a small shop on the second floor of the building that housed Gray’s Drug at the corner of Fourth Street and 14th Avenue in the heart of Dinkytown. Before that, his shop was on the fourth floor of Dinkydale.

“Tom’s specialties include cleaning, repairing, re-dyeing, and reconditioning leather garments,” his website said. He designed and made custom garments, and his website promised “new products from cosmic bracelets to racing leathers.”

Identifying with fellow Baby Boomer motorcycle enthusiasts who were gaining weight in their midsections, he created the Zip-r-strip, a leather strip with a zipper on both sides to allow one to expand the waist of a leather jacket. The extenders sold for a time in Harley-Davidson stores.

Over the weekend, Dale’s business website became “Remember TTT: The Man. The Legend. The Tailor,” with rotating pictures on the homepage and drop-down menus for people to post pictures and memories, bid on specialized sewing equipment and the Zip-r-strip patent, and report any unresolved issues or unfinished business with Tom the Tailor.

Tom Dale grew up in Hibbing, where he graduated from high school in 1968.

His LinkedIn resume says he learned tailoring at Minneapolis Vocational and attended the University of Minnesota-Twin Cities from 1971 to 1973. He listed his skills as leather repairs, prototype development, innovating leather, and leather clothing.

He had worked as a brakeman for the Chicago Northwestern Railroad from June 1978 to September 1980, listing among his duties to “wave at waiting autos from the caboose.” He was a drill operator from May 1975 to October 1977 for Jones and Laughlin Mining Co., drilling holes to set blasting charges and aiding in detonating the explosions.

At the visitation, a small table displayed both a newspaper photo showing Dale, a Navy man and Vietnam veteran, riding a tank with a military rifle in 1971 and a photo in a book of him among antiwar demonstrators. The book was by John Kerry and the Vietnam Veterans Against the War, of which Dale was a member.

When allegation arose in 1992 that presidential candidate Bill Clinton had used political connections to avoid service in Vietnam, Dale said he would not judge any young man for his actions during Vietnam, whether he went to war (which Dale did) or strongly protested it (which Dale also did).

On his website, he said he would “work with clients on a one-to-one relationship to produce a product that meets my customer’s needs.”

One of those clients, dental hygienist Belinda Flanagan of Bloomington, provided a testimonial on Dale’s website and wrote a memorial after his death about a custom jacket he made as a birthday surprise for her brother.

She wanted her brother’s elk hide made into a jacket. “I can do sewing, but I haven’t sewed on leather so I starting calling people who have, and I could tell they didn’t have the same idea I did.”

In her tribute, Flanagan said she told Tom about her brother’s hunt in the Utah mountains where he shot the elk. “At the end of the story Tom looked at me and said, ‘Oh yeah, we have to make a garment that honors the elk and honors your brother.’ I knew I found the right person to do this.”

“As Tom worked on the design,” she said, “the jacket took form and became a unique work of wearable art. The elk was taken with one bullet. There was an entrance hole and an exit hole. Tom incorporated those holes into the design.”

He added features that only a motorcyclist would understand, like snaps on the collar so it doesn’t flap in your face, zippers on the sleeves so you can wear thick gloves, various pockets for tools, and the slanted shape of the pockets that allow access while driving, she said.

As Tom finished the jacket, he asked whether he should put his label inside. “An artist always signs his work,” she told him. Whenever anyone comments on the jacket, she said, her brother proudly opens it and shows Tom’s label and tells the story of how it came to be, Flanagan said.

“This kind of project is special,” Tom Dale wrote on his website, “because it connects a jacket to a person’s life in a way that something store-bought never could.” In Dale’s account, the elk was taken during bow hunting.

“Tom was an artist.” Flanagan said. “He was such a unique personality. He was an extremely interesting person.”

Dale and Trittipo were members of a Southeast Minneapolis babysitting co-op in which the members cared for one another’s children instead of hiring babysitters for child care. The children, including Kaycie Dale, often became friends and the parents also created a community. (I was also a member.)

Because he belonged to a motorcycle club called the Blind Lizards, he made a lizard costume and became the club’s mascot, joining the group every Father’s Day on Nicollet Island. He also used it and other costumes on Halloween, Kaycie Dale said.

“Never a dull moment with Tom the Tailor,” Kaycie Dale wrote on her Facebook timeline. “I love you so much Daddy-O. You are and will always be my sunshine.”

“I have so much to say, you know,” she said about her dad. “I’m definitely my father’s daughter. I think my personality is similar to my dad’s, with my love for adventure.” After learning to teach English as a second language last year, she spent a year teaching English in Quito, Ecuador, returning in May.

Besides Kaycie, Tom’s survivors include his ex-wife, Sharron Dale Nelson; and his brother John and his family. His newspaper obituary also listed the Minneapolis Moto Mutz motorcycle club among his surviving family.

His body was cremated and some of his ashes will be scattered on a motorcycle trip.

The TTT website asks people to fill out a form to express an interest in specialized equipment, including sewing machine, bolts of leather, buttons, an embossing machine, zippers, and the Zip-r-strip patent.

In an interview last winter, Tom Dale said he dreamed of returning his business to Dinkytown.

“I dream that I found a spot that I could afford and go back there. I’m not in control. I’m just sleeping. It never ends well. It was taken away from me. I didn’t walk away from it voluntarily. It happens to you, not because of you.”

He said he had to move when the owner improved the building and raised the rent. The Loring Pasta Bar fills the entire building in which Tom’s shop was a small office on the second floor.

Tom the Tailor relocated his business into the basement of his home in the Southeast Como neighborhood.

His first Dinkytown location was in Dinkydale. “We opened in Dinkydale on the fourth floor—only one room. It was once the penthouse of the College Inn Hotel with a 360-degree view. An architecture firm that was there once built a spiral staircase from the third to the fourth floor.”

He said it was a great spot, but it was difficult to get people to walk up the narrow stairs—unlike the later store above Gray’s Drug.

“Being upstairs of the drug store was like being at the Vatican,” he said about the later corner location. “Everyone knew where it was. You could just say you were in Dinkytown above Gray’s Drug and you didn’t need to give directions. It was a landmark, an institution destination.”

“I always have a warm spot for that community,” he said last winter.