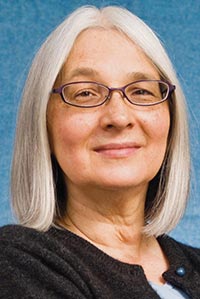 Diverse though our experiences may be, we were all children once, and I believe that reading children's literature helps us to see ... through the lens of that commonality.
- Linda LeGarde Grover

n Ojibwe tradition, as well as in all other Native cultures that I know of, womanhood from birth until the return to the spirit world is a sacred state, honored and respected. Countless generations of storytelling, combined with observation and experience, are the foundation of Ojibwe teaching and learning.

For girls, this has been intertwined with preparation for the passages of the female life; the words themselves, ikwe for woman and kwesens (“small woman”) for girl, indicate a meaningful seamlessness in the cosmology of tribal womanhood.

The position of Ojibwe woman is equal in status and power to that of Ojibwe men; this concept is so basic to our worldview that it is rarely even stated. Many Native women feel that our cultural role, including our gifts and resulting obligations, is beyond the constructs of majority American feminism, that “indigenous feminism” as defined by majority feminists is not empowering and inclusive so much as simply missing the point. We are Native women; our culture honors womanhood.

The students in the American Indian Women course that I teach, both Native and non-Native, have sometimes struggled to understand (and to reconcile with some preconceived stereotypes) the manifestations of female power and position in cultures unfamiliar to them. As their teacher – a storyteller and an older Ojibwe woman – I thought that they might find it helpful to apply their own experience and knowledge to their questions by stepping back to their childhood days through an examination of Native children’s literature.

Diverse though our experiences may be, we were all children once, and I believe that reading children’s literature helps us to see and learn through the lens of that commonality. As adult readers we have the opportunity to return, however briefly, to our less-experienced selves, and learn again as children.

The students chose storybooks with female “center” characters from my own collection to read first in their childhood personae, then as young adult women. The characters and their stories became the springboard to then further research female roles in diverse Native tribes past and present, against the backdrop of federal Indian policies and the rise of contemporary feminism, including the complexities and controversies of indigenous feminism.

Sharing and discussing the texts and illustrations generated much discussion in class as they revisited themselves as kwesensag, girls who became guests of the characters and cultures within the stories.

Linda LeGarde Grover is a member of the Bois Forte Band of Ojibwe and associate professor of American Indian Studies at the University of Minnesota Duluth. She is the author of the novel “The Road Back to Sweetgrass,” the short-fiction collection “The Dance Boots” and the poetry collection “THE.INDIAN.AT.INDIAN.SCHOOL.”

What’s on your bookshelf?
Send us 450 words about your booklife, plus your list of five related books by women authors. editor@womenspress.com