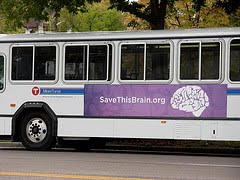 Just after I moved to the Twin Cities I had my first independant big city bus experience. In an effort to save gas money I have decided to only drive my car to and from work. On this perticular evening I had signed up to take a class on blogging oddly enough. This class was not with in walking distance from my house and my rule about driving forced me to take the bus.

Taking the bus in a city that you are not firmilar with is a difficult task. The bus driver will announce the next stop with as much vigor as they can but if you do not know the intersection of your destination then this isn’t much help. On this pirticular evening I was heading to a destination that I had been before but not by bus.

Crusing down University Ave in the #16 bus I was trying to keep my eyes on the things around me, thsi is a technique taht I use when driving that does not translate to riding the bus. When I saw a building that looked like my destination I simply got off the bus. Since I didn’t really understand the wonderful Minneapolis Transit System transfer policy I was overcome with the feelings that I was doomed to walk the remainder of my trip. About a mile of walking later I arrived at my destination. The class went well, I left motivated to enter the world of blogging.

The day happened to be Monday, which is the day I play pub trivia with some friends. I decided that I would use the bus to get to my favorite social environment. Luckily the bus that took me from my home to the Rondo Library would also take me to my next distination. This time I was dead set on getting off the bus at the right place. I sat in the front of the bus and kept my eyes on the road, passing through the University and over the Mississippi river I came to the last University stop. Much to my chagrin I got off the bus one stop too early. This was a great improvement from my last attempt at riding the bus but still left me out in the rain walking much farther than I had hoped to.

I guess the moral of this story is learning the difference between modes of transportation. Public transportation is geared much more to the street by street driver, those of us who use landmarks are at a bit of a disadvantage when traveling. Since this fateful day I have only gotten off the bus early on one other trip and can safely say that it shouldn’t happen again.