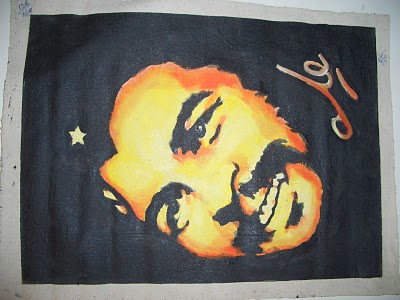 My friend Colin really liked an oil painting of Che Guevara that he saw in a little shop in the “Old Havana” part of the city. Che was one of the intellectual and military leaders of the revolution to overthrow the corrupt Batista regime in Cuba in the late 1950s. After his death in 1967 in Bolivia, where he was trying to organize another revolution against another US-supported dictator (both Batista and Hugo Banzer were trained at the US Army School of the Americas), he was accorded almost mythological status throughout Latin America, but especially in Cuba. Some say Che was more useful as a martyr for the movement than when he was alive. Anyway, today his image is a marketable commodity. His face adorns T-shirts, hats, postcards, coins and posters.

There is no little irony in having two Americans barter with two Cubans over the cost of two paintings of Che. Colin had spotted another painting — larger and more colorful — a more impressionistic image with a hint of a twinkle in Che’s eyes. The artist and his grandfather wouldn’t budge off the $40 CUC price for it but were willing to drop from $20 to $15 for the smaller canvas; if we bought both, we could get them for $50.

As a seminary student, Colin’s budget was tighter than mine so I told him I’d pay $20 for the smaller so he could get the larger one for the $30 he could afford. A deal was struck and the artist and his family should be able to get some extra mileage out of the sale amounting to about $55 US. Viva la revolution — everyone seeks to profit off Che, but does anyone still share the reasons for the revolution? As one oppressive system replaces the other, when will a real human liberation movement succeed?

It was suggested to us by our government-hired tour leader that we tip our bus driver $10 CUC for his four partial days with us. Some of us suspected that Maggie was hoping for an even bigger “score” when she got her tip from us at the end of our stay. One delegation member observed that at $10 CUC each, given that our group was 18 persons strong, the $180 CUC would be well in excess of a year’s salary for most Cuban residents. Certainly many of us could afford it, but is tipping like that a way to move forward, or does it create a new dependency?

With most things being government-run and government-owned, I feel better paying our CUC pesos to the local Episcopalians for meals and staying in the church dorm rooms in Itabo and at the Cathedral.

First the crowing of the cock and then the clop, clop, clop 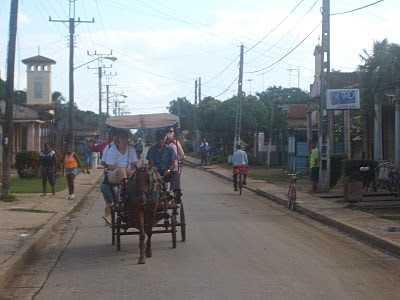 [The small town of Itabo is almost 4 hours east of Havana. It is the town where Griselda Delgado served as priest for the small Episcopal Church of the Saint Virgin Mary for the past 20 years. Our visit was brief, just less than 24 hours, but it gave us a taste of the community and a hearty appetite to return for more.]

The roosters in Itabo must have started, timidly at first, about 2 a.m. and then by 4 a.m. it wasn’t just those few extroverts, it must have been all their cousins as well. By 6 a.m. they were all in the chorus and I dragged myself out of bed realizing no more sleep was forthcoming. Soon the clopping of horse hooves on the pavement of the street in front of the Iglesia Episcopal de Santa Maria Virgen joined the morning’s music. We slept in the church’s dorm located behind the sanctuary and had a bracing cold-water shower to bring me to full consciousness. By 7 a.m., the hens and other chickens began clucking, a sound more pleasant than the raucous rooster screeches. I’m surprised the dogs in the neighborhood didn’t join in the singing — or the overly friendly church cat that had sidled up to us at supper.

The wonderful, friendly hospitality makes it quite evident that the parishioners treasure our visit. As a few of us sat around visiting and trying to understand one another (fortunately four of the seven of us on this extended-stay portion of our Cuba trip are somewhat proficient in Spanish), someone raises her glass filled with a fruit cocktail and offers a toast in Spanish. Another one follows and then another. So I add (in English) my toast: “End the embargo, ahora!” Everyone smiles and says, “Si, yes!”

This parish had “irregular” services for a period of 20 years and then no priest at all for another four years; we were told the church building itself was infested with bats, the roof leaked, and the place was mostly in disrepair when a new priest, a recent graduate from a Protestant seminary in Matanzas, Griselda Delgado, arrived in 1988. After replacing the roof, adding some additional buildings and rooms, and building a wall to enclose the back of the property to protect what is now a verdant garden with fruit trees and a variety of vegetables and herbs, the makeover is simply amazing. But this makeover was not the work of that one priest, now the newly consecrated Episcopal Bishop of Cuba, but of a partnership with several Episcopalian parishes in the US and tremendous work from the Itabo parishioners.

“Sy,” the hospitality coordinator of the Cathedral in Havana, and Carlos, our bus driver, accompanied us on the four-hour drive east from Havana, skirting the northern coast of Cuba for about half of the trip along with the Bishop and her husband. [What a wonderful sound to hear “and her husband” or “and her partner” added to any phrase describing church leadership today!] We stopped briefly at a rest area at the border between the provinces of Habana and Matanzas, one of the highest spots in Cuba for a wonderful look around. We also stopped briefly en route so the Bishop and her husband could see their grandchildren in two towns we were driving through. The second town/city was Cardenas, hometown of Elian Gonzales, the young boy taken to the US in the 1990s by one parent and then returned to Cuba after a prolonged political storm of controversy in the US.

Now is the time for those storm clouds to lift. We need to restore diplomatic relations with our neighbors to the south and allow for a free exchange of ideas and goods, carefully, so the giant empire to the north doesn’t overwhelm, but rather find ways to learn how to survive — and thrive — in a post-oil world. We have much to learn if we can humble ourselves and act as partners rather than as patrons and beneficiaries. 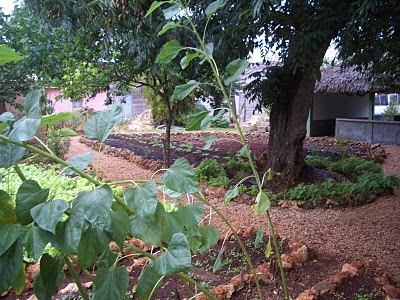