Author’s note: From November 27-December 4, 2010 I traveled (legally!) to Cuba as part of a 18-member delegation from St. Mark’s Episcopal Cathedral in Minneapolis. We went to celebrate the installation of Griselda Delgado as the new Episcopalian Bishop of Cuba. As one of two non-Episcopalians on the trip, I felt thoroughly included and welcomed by both my fellow travelers and those we met in Cuba.

Our Cuban guide took us to a “private” family-owned restaurant for our supper on Monday evening. Located on the second floor of a building which was ostensibly their residence, I noticed the fancy woodwork design as we climbed the stairs. Named “La Gardenita” or Little Farmer, the décor of this restaurant and ambiance were noticeably different and the wait staff extremely welcoming and friendly in their cowboy hats and plunging necklines. The menu was impressive and the food presentation and quality was excellent.

Unlike the government-owned and run restaurants, this “palador” was an outgrowth of some limited private enterprise now allowed by the government since the Soviet largess dried up after the collapse of many communist economies and governments in 1989. I am a strong supporter of government programs for education, healthcare, social security, and a safety net for the poor — all of which Cuba seems to do better than the US — but it appears to me that there seems to allow little incentive in their economy for this kind of initiative. It was refreshing but it also caused me to wonder how far to let it progress lest it fester into the incredible gaps between the rich and the poor so evident in the US today. Tonight was a powerful argument in favor of a mixed economy that also allows room for private initiative and resourcefulness.

Jaded as we Americans often are, some of us wondered if “Maggie,” our tour guide, got a kickback from the restaurant for bringing in 18 customers. We are told “there is very little corruption here in Cuba” but one must wonder about the temptation when government wages are so low and consumer goods are rare and expensive.

There is no word in proper Spanish for a woman bishop of the church — the language being so traditionally linked to an exclusive male-dominated hierarchy which continues today in the Roman Catholic Church. (A practice, I suspect, which leads many would-be Catholics to become Episcopalians!) Some argue that newly installed Bishop Griselda should be referred to as La Obispo, using the feminine pronoun with the masculine noun. Doug and his Catholic priest friend Gilberto, from the St. Vincent DePaul Order in Mississippi who has been living in Havana for seven years, discussed this back and forth after one of the members of Gilberto’s parish, a copy editor, said it is incorrect. Doug triumphantly pointed out to his friend the Order of Worship program passed out at the service with the title: La Obispa. As old prejudices slowly die (too slowly for some of us), so too must the language change. 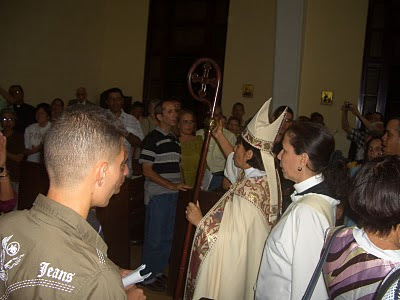 I could see the surprise on the taxi driver’s face on the return ride from the Cathedral as Susan explained to him where we had been (installing a woman bishop in the church!) — and then told him that she, too, was a priest — “sacerdote” — and her bishop (this time a male, Brian Prior, Bishop of Minnesota) was seated in the taxi directly behind her! The driver seemed to accept this in stride; after all, being under a secular and, some might say, an anti-religious government since 1959, has already changed many of the attitudes of younger generations. (It is said that more than 70% of today’s Cuban population has only known the government under “the revolution,” having been born after January 1, 1959.)

We met in the Bishop’s residence next to the Cathedral two days after her installation for two hours. With the retired Suffragan Bishop, Ulysses, translating, Bishop Griselda talked about her desire to help her parishes to become self-sustaining. She wants her parishioners to come up with the plans for what they would like to do (agriculture/gardens, cattle or chickens, crafts, …) and then she will work to train the priests to help the congregations implement that dream.

The Minnesotan Episcopalians want to “walk alongside” their Cubano sisters and brothers, assisting where needed. Do they need computers? If so, is there IT help for when the computer laptop crashes? Is there enough infrastructure in the far-away eastern end of the island for good internet/broadband service? (We learned later that the government doesn’t allow Cubans to surf the net, just get email — and often without any attachments.)

The bishop explains one of her priorities is getting money to pay for transporting priests and key laypersons to a central gathering place to learn from each other. Santiago de Cuba, a parish on the eastern end of the island, is a 14-hour bus ride from the capital city although only a one-hour plane ride, which costs considerably more.

Should the folks at St. Mark’s in Minneapolis try to raise the $8-15,000 CUCs it would take to buy a car for the bishop to use — if they could find one in Cuba for a fair price? Many of the newer cars on the street are made in China, Korea or Europe. Most of the buses in Havana are made in China we have been told.

If only there was the political will and courage in the US to lift the damn embargo! The Cuban people we meet are warm and hospitable — they are not our adversaries. Why can’t the political elites left the people enjoy the ability to share with each other across the boundaries of nation and language? This is clearly a peacemaking and justice issue to add to an already long list that our leaders must confront — and soon!