Author’s note: From November 27 through December 4, 2010 I traveled (legally!) to Cuba as part of a 18-member delegation from St. Mark’s Episcopal Cathedral in Minneapolis. We went to celebrate the installation of Griselda Delgado as the new Episcopalian Bishop of Cuba. As one of two non-Episcopalians on the trip, I felt thoroughly included and welcomed by both my fellow travelers and those we met in Cuba.

Two weeks before leaving to fly to Havana, many of those traveling together met at the Episcopal Cathedral in Minneapolis to talk about plans for the trip. As part of that gathering, we received our plane tickets and a schedule of our itinerary. Included in that was an essay adapted from material from Paul Strickland entitled “Why Do Pilgrimage?” It encouraged us to travel not as tourists but rather as pilgrims on a transformative journey. Rather than go as observers, we were urged to “become pilgrims who come with searching hearts.”

Our trip gave me much “grist for the mill,” things to think about and ponder for a while. It is not “sound bite”-ready, nor is it likely to be. Our nation has a complicated (and mostly shameful) history with our island neighbor, and decisions made by both governments over the years have squandered many opportunities for a healthy reconciliation. The experience was sobering yet celebratory. We have much to share with each other: it should not be a one-way street modeling the colonial past or the domination of empire present.

The Cuban experience since the collapse of the USSR in 1989 has left the island with some harsh economic realities but a resilient population. Like the Iraqis I met in Baghdad three months before our present war, the people I met who were ostensibly my “enemy” greeted me with warm hospitality, curiosity, and much enthusiasm. Both peoples have lived under repressive regimes yet still enjoyed benefits many within our dominant empire lack: access to free healthcare and education for all. Both societies, suffering under economic sanctions imposed by or at the bequest of our government, lacked affordable consumer goods that many of us take for granted. The assumption being that when the people hurt enough, they will rise up and overthrow their governments. It didn’t work in the 13 years before our invasion in Iraq; it has been tried for more than 50 years in Cuba, so far without “success.”

Here is the first of a few stories I wrote during my first few days in the country. Look for others to soon be posted here.

The “Old Man” and the Sea

There is a statute, pictured above, at the end of The Prado, a walkway umbrellaed with trees overhead that proceeds from near the Capitol building in Havana to the wall protecting the city from the ocean to the north. At the end of the walkway, looking out over the expanse of water ahead, is a sculpture of marble and bronze. From a distance I assumed it referenced Ernest Hemingway’s novel “The Old Man and the Sea,” but the front it tells me that it is dedicated to a poet/martyr, J.C. Zenea, and dated in 1871 while Cuba remained under colonial rule of Spain. Since Hemingway did much of his writing at a hotel nearby, maybe he was referencing this statute. As I cross the Malecon, the street parallel to the sea wall, I enter the area of the remains of one of the two forts that attempted to protect the entrance to Havana Bay and the harbors within. 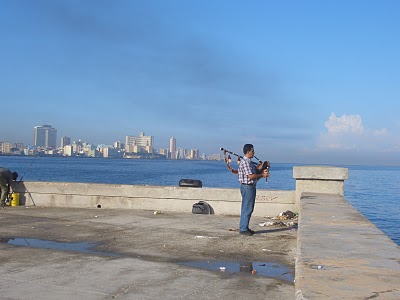 After listening to a lone bagpipe player greeting the Sunday morning by playing tunes over the Florida Straits toward Key West, and watching a fisherman cast his line into the sea, a dark-skinned Afro-Cuban man greets me as I take photographs of the forts and surrounding vistas. He inquires, “Que pais?” asking what country am I from. (Many Cubans I encountered on the streets asked me if I were from Spain or Chile because they don’t expect to encounter many Americans because of our country’s travel restrictions.) When I respond that I am from the U.S., he asks what state and proceeds to tell me in English that is better than my Spanish that he once visited Des Moines.

He asked me to sit down with him on a nearby bench by the waterfront sea wall and tells me a slice of his life: he is 58 and helps take care of his 90-year-old father — the only family he has left. He works from 7 p.m. to 7 a.m. as a security guard at a local school — paid 2 Cuban pesos (worth about $0.15 U.S.) to guard the computers and other school equipment.

I could see the sadness in his eyes when I told him I was 60 and my own father was 89 — we were almost the same — but he said, “look at my wrinkled face compared to your smooth, young-looking face.” He did appear to be 10 years older than me. Life here is hard.

When I commiserated and denounced my own country’s embargo, he responded, “No, it is also the embargo that my own government sets up.” (Cuba’s government has strict limits on TV stations available and allows no access to the Internet other than email. Certain other goods aren’t allowed in, and prices are prohibitively expensive for many consumer goods, all blamed on the US embargo.) He shook his head and observed, “I don’t know if I’ll live to see the day of change here.” When I asked who would succeed the aging Castro brothers, Fidel and Raul, when they die, he told me “nobody knows.” They’ve hung on to power without a clear succession plan that the people support.

What hath the revolution wrought? Many Americans rightly praise the Cuban ingenuity of keeping 1950s-era automobiles running but much of “Habana” is crumbling from the lack of care for the infrastructure. Although not naming Fidel and Raul, this Cuban man felt the government was hoarding the resources for themselves and stifling other initiatives.

The high blood pressure he suffers from greatly restricts his diet and although he tells me he shouldn’t eat bread and pasta, he says he has only had bread and coffee for breakfast (it being the end of the month and his food ration long used up) and “soon it will be lunchtime.” It felt like it with the hot sun beating down on us although when I looked at my watch it was only 9:30.

Where is the investment in solar collectors? Clearly this “managed economy” has failed; is the rapacious capitalism I so often deplore and denounce the answer here?

He doesn’t ask but I hand this brother a $10 CUC note (worth about $11-12 US) and tell him to get some breakfast and to share it with his father. He had told me he was too old and not inclined to “hold a gun up to someone’s head” to get money to survive. “Besides, that’s not how I treat people.” But he is waiting, hoping that his countrymen and women will rise up and demand a government that can help lift them out of the grinding, urban poverty.

Returning from my walk, a teenage boy approaches me in the area in front of the Museum of the Revolution with his cart, broom, and two waste receptacles. He tells me his job is to clean up the park/walkway in front of the museum for which he is paid one Cuban peso a month. He is the only son of his mother with whom he lives. He asks if I can give him some money for food. I hand his a $3 CUC note and continue my walk.