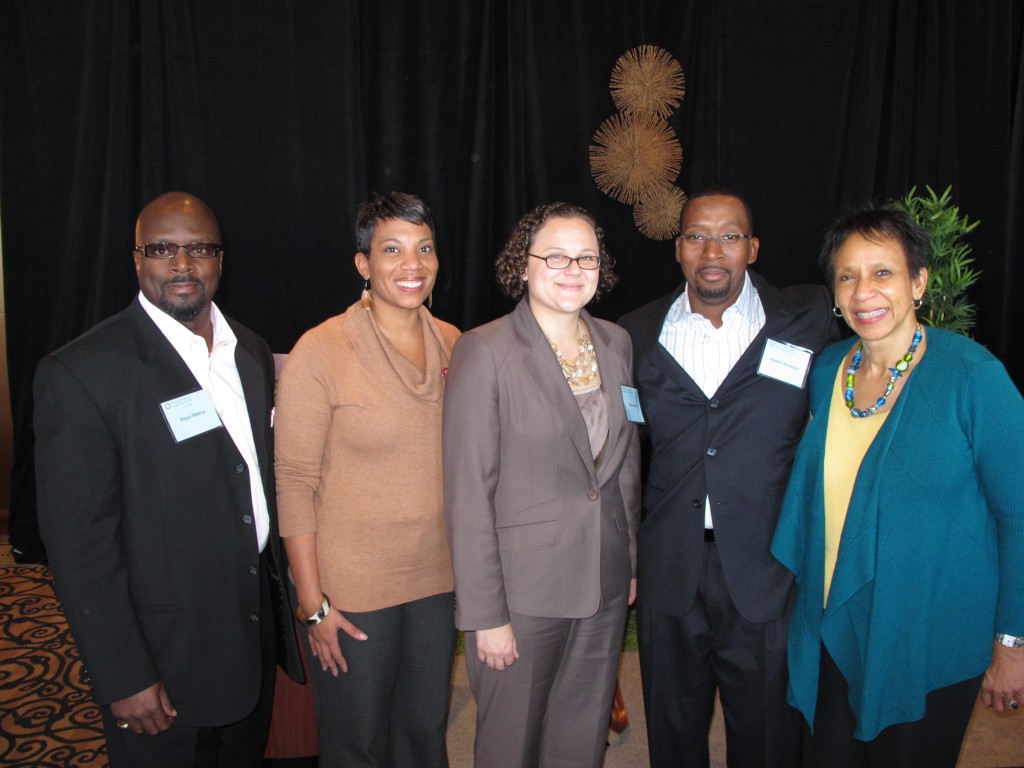 Since the last full forum gathering in June, AALF work groups have been continuing to meet for about two hours per month to further the agenda on their four focus areas: health and wellness; economic development; family, culture and spirituality; and education. Saturday’s meeting was a rally for support, providing an update on what has been achieved since June.

In June, the group presented a “blueprint for action,” identifying the problems that needed to be addressed. Since that time, the education work group, which has probably progressed more rapidly than other groups, released A Crisis in Our Community: Closing the Five Education Gaps detailing what causes the achievement gap.

“How weary I am of mainstream organizations and leaders, and yes, even funders, who think they know better than we do about how to heal our community,” said Karen Kelley-Ariwoola, AALF member and vice president of charitable philanthropy at the Minneapolis Foundation.

“I have the privilege of sitting around a lot of tables on the issues of education,” Kelly-Ariwoola continued, “and of late I have taken great joy in saying, “Did you know that there are five gaps? [That] changes the dynamic of the conversation; it adds texture and context in a way that I believe only we can do about our own community.”

The five gaps are:

Belief Gap: focusing on how the expectations of those involved with a student’s success — including the student — impact the success of the student.

Time Gap: recognizing that most African American students function below their grade level.

Teaching Gap: placing the best teachers with students that have the greatest needs.

Leadership Gap: highlighting the importance of school administrators and principals.

This 30-page document, along with the Education Work Group Strategic Plan Overview, details the AALF response to closing the achievement gap based on input from Eric Mahmoud, executive director of Seed Academy/Harvest Preparatory, one of the few schools in the state where African American children are performing at grade level based on state test scores.

What have they done?

What the forum does is take people who are involved in organizations through employment or volunteer avenues and link them with initiatives to further the forum’s agenda. Gary Cunningham, a founder of the AALF, is a current member of the Metropolitan Council. The council oversees state-wide transportation, the largest affordable housing program in the state, and the majority of park resources. It also distributes most of the transportation funds, but few African Americans are involved in that decision-making. Cunningham has recently appointed the first African American in many years, Kenya McKnight, to a transportation advisory committee.

Trista Harris, a longtime member of the forum and executive director of Headwaters Foundation, explained how AALF, which has been criticized for its lack of reaction to the immediate needs of the community, responded to the late-spring North Minneapolis tornado, though it did not seem to fit within their “50-year vision of the community.”

Target Corporation offered an $11,000 match to the AALF partnership with We Care: North Minneapolis Tornado Recovery so that 1,000 children directly impacted by the storm could receive a backpack filled with school supplies, a winter coat, tennis shoes, and books to start a home library.

“We need to be able to support our own…and let them know that we haven’t forgotten about them,” Harris said. “We want them to have the things that they need to be prepared for school.”

The power of civic engagement

This past Saturday’s forum consisted of several breakout sessions that gave participants insights on what each of the committees were working on. Everyone is encouraged to lead — the majority of the presenters from the June forum stood in the background during the December forum.

Statements made during the forum by members and new attendees highlighted two areas of weakness: reaching and sustaining younger members, and broadening their focus to more grassroots efforts.

Each breakout session reinforced the importance of getting involved. James Trice and Sondra Samuels led a discussion on influencing public policy, which included a documentary of Fanny Lou Hamer, a sharecropper whose voice strongly impacted voter registration.

Trice detailed the impact AALF has had on legislation, including youth violence as a public heath issue, legislation that allowed individuals to use WIC vouchers at co-ops and farmers’ markets, and the state supreme court overriding former Governor Pawlenty’s unallotment of General Assistance Medical Care.

Trice also congratulated State Representatives Hayden and Champion in their efforts to bring Governor Dayton to the North Minneapolis community. He encouraged attendees to realize their own potential by asking who is the most powerful person in the political process. “Everybody,” one attendee responded. “It’s a domino effect if our policy members aren’t doing their job.”

“[The] passive [citizen]. They just sit back and say, ‘My vote don’t count. It don’t matter, so forget about it.’ That’s the person that you have to change the mindset of,” said Akmiri Sekhr-Ra.

“In my opinion, the advocate is the most important person,” said Josie Johnson. “They have to be well informed. They have to know the process, and they have to be consistent. And I think that they can then influence the lobbyist as well as the elected official.”

“The active citizen is the most powerful person,” answered Trice. “You have to be active before you can do any of those other things.” Trice also said that a passive citizen is equally powerful in giving up their power. He explained that elected officials often count on those who might oppose their positions to not show up. North Minneapolis may have been overlooked by previous governors because of low voter turnout.

What initiates a first visit to the forum and what seems to sustain membership is the forum’s ability to alleviate a common ailment in many Black Minnesotans: a feeling of isolation.

“Every time I get up here in front of you, I have to try and calm my heart because of how full I feel from being in the presence of a room full of Black politically powerful people,” said longtime forum member Repa Mekha.

A speaker at the forum, LaDonna Redmond, was offered a job this past February at the Institute for Agriculture and Trade Policy (IATP), founded by Minnesota Secretary of State Mark Richie. IATP focuses on justice in food and agriculture systems.

Redmond’s job brought her to Minnesota from Chicago, and her first impressions were the cold weather and the fact that she didn’t see many Black people. An invitation from a colleague brought her to the AALF.

“I got here and there was, like, 200 African Americans all in one place, and I was, like, there actually are Black people here,” Redmond explained. Based on the recommendation of an IATP coworker, Redmond brought the idea of working though the AALF on a response to Cargill’s recent charge from the department of justice of racial discrimination.

Many of the jobs in agriculture are low-wage jobs. Redmond said that IATP is committed to broadening the opportunities for jobs that allow families to own homes and pay for college.

“We want to be able to understand what the gap will be in terms of those jobs and where people are,” she said. “How can a company like Cargill kind of step up to the plate and say this is what we… are going to do?”

AALF member Sylvia Bartley is a native of the United Kingdom who relocated to the U.S. 14 months ago through her employment with Medtronic in global marketing for deep brain stimulation — the insertion of electrodes into the brain to alleviate symptoms of neurological conditions such as Parkinson’s Disease.

“I worked in Europe for three and a half years in [Medtronic’s] Swiss headquarters… I was the only Black one in the whole building — 2-3,000 people. The only other Black people were the manufacturers and the cleaners.

“My passion has always been our people. The disparities are the same across the world,” she explained.