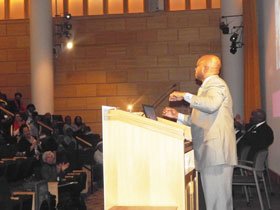 The Rev. Jerry McAfee gets applause for his call to come together despite differences within the African-American community.

They came together for the greater good. A one-day gathering of several hundred at the University of Minnesota Humphrey School of Public Affairs was convened by the African American Leadership Forum (AALF) and it brought together some who may have had diverging thoughts but common goals. These goals are to put into plan actions that will empower area African-Americans – many of whom have been marginalized and are not seeing the same economic, educational and political gains as their white neighbors.

At a time when Blacks in the Twin Cities and throughout Minnesota are woefully lagging behind in areas of jobs, housing, education, health and political leadership, and are encountering the criminal justice system at near epidemic proportions, Jeffrey Hassan, the executive director of AALF, said the issues facing Blacks are at a critical level.

“It’s been critical for 400 years,” said Hassan, underscoring the persistent struggle from slavery to current day for Blacks in America. “But at this time – at this moment – we have everything we need to move forward. So as Kim (Nelson, a speaker at the forum) said, if we don’t get things done now, it’s on us.”

In addition to Nelson, a senior vice president at General Mills, forum attendees heard from Congressman Keith Ellison; Minnesota’s only Black state legislators, State Sens. Bobby Joe Champion and Jeff Hayden and State Rep. Rena Moran; Harvest Network founder and CEO, Eric Mahmoud; the Rev. Jerry McAfee and a host of others. McAfee did not mince words when talking about the need to work together to push the AALF agenda forward, calling for an end to the many divisions within Black communities.

“There are some folks who didn’t go to college and have the nerve to be upset with the people who went and got an education,” said a spirited McAfee. “Now our grandmothers and grandfathers who couldn’t read or write fought for us to be able to get an education and you’re mad that people went out and did that. What sense does that make?”

McAfee was equally critical of some of the educated middle class African-Americans as well.

“There are also some folks who went to (college) and moved on and somehow you forgot how you got there,” said McAfee.

Following the plenary session of the Feb. 21 forum, more targeted conversations were had in various breakout sessions on the topics of economic empowerment, health, criminal justice and education. During a presentation and discussion of economic advancement Kevin Lindsey, Minnesota Department of Human Rights commissioner, explained why it is imperative to have people of color in authoritative roles within business and government. He used the current construction of the new Vikings stadium as a prime example of positive change that is taking place just by having those committed to diversity and equality in positions of authority.

“As it initially stood, the mandate for minority participation was 11 percent people of color. I changed that to 32 percent,” said Lindsey. “I didn’t ask anybody … I did it because I have that power within my job. Not everything requires a vote; and that change is better for all of Minnesota.”

Lindsey said the more Minnesotans who are benefiting from employment the better it is financially for the state and businesses within the state.

Hassan said the event was the first of many events AALF is coordinating to move forward with a united urban agenda and pointed to upcoming leadership training sessions for emerging leaders within various sectors of the community.