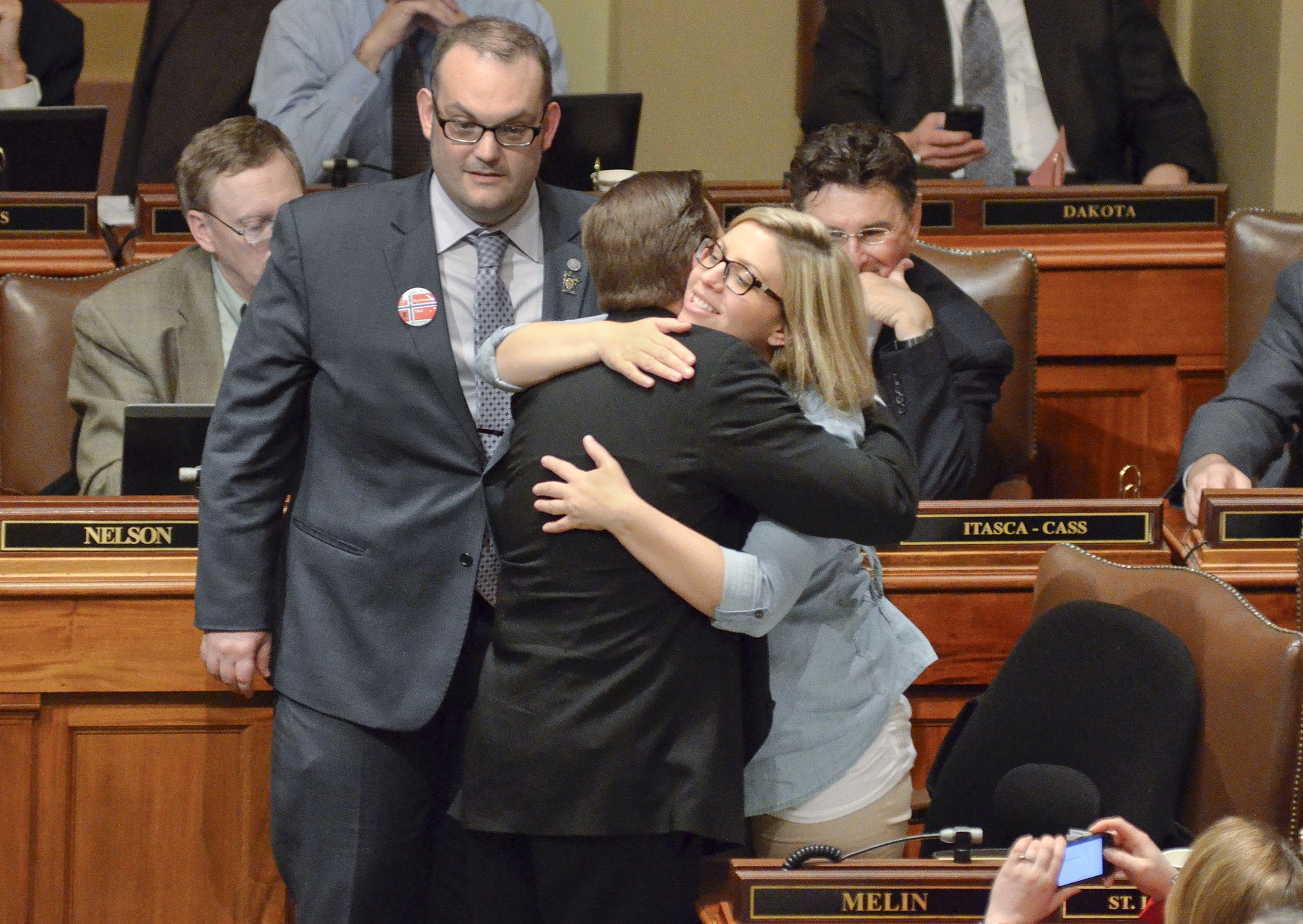 Rep. Carly Melin gets an embrace from Sen. D. Scott Dibble after final House passage of her medical cannabis bill May 16. (Photo by Andrew VonBank)

The 2014 Legislature gaveled in on the relatively late date of Feb. 25. But lawmakers surprised even themselves by accomplishing a substantial amount of this year’s business on the early side of things. By the time legislators returned to their districts for the Easter/Passover recess, they had cut taxes and increased the budget reserves by more than $600 million and settled their differences on raising the state’s hourly minimum wage.

“When you think of everything that was cleared through before we took the spring break, it was amazing,” said Rep. Ann Lenczewski (DFL-Bloomington), the sponsor of two omnibus tax bills this session.

Lawmakers then went on to adjourn three days before the May 19 constitutional deadline after passing a second round of tax breaks, bonding, supplemental spending, and medical marijuana legislation.

“We came into session prepared to work, and I think you will all notice that we took up issues right away,” said House Majority Leader Erin Murphy (DFL-St. Paul). “We took up a tax bill right away. We took up work on the supplemental budget bill right away so that we could finish our work and end a couple days early.”

For the last 15 years, lawmakers in St. Paul have often confronted large budget deficits, the fallout from national economic crises. But this year, on the same week the session began, Minnesota Management & Budget officials delivered an economic forecast that projected a $1.23 billion General Fund surplus for the current biennium. That news set in motion the major tax and spending bills.

In the midst of a winter that set record low temperatures, lawmakers fast-tracked $20 million in low-income heating assistance. Before the end of March, Gov. Mark Dayton had signed $440 million in tax cuts and federal tax conformity for Minnesotans to claim on their 2013 tax returns. That was accompanied by $150 million for the state’s rainy day fund in the event of another budget busting economic downturn in the future.

Republicans, who hold the minority in both the House and Senate, called on DFLers to return the surplus to Minnesotans rather than increase spending, using the mantra of “Give It Back.” They supported the tax cut measures, but criticized tax increases enacted in 2013 and the $263 million of General Fund spending in the supplemental appropriations bill.

Although the DFL has control of the House, Senate and governor’s office, there sometimes was intra-party disagreement. The House and Senate came into the session at odds over minimum wage legislation, with a major sticking point over the House’s preference to index the wage to inflation. While the issue appeared poised for a lengthy stalemate, legislative leaders surprised many in early April when they agreed to $9.50, phased in by 2016. The House prevailed on inflation indexing but didn’t get a 40-hour work week for overtime.

“By raising the minimum wage to $9.50 and indexing it to inflation, we set a higher floor for all workers’ wages, and ensure inflation does not erode those wages in the future,” said Rep. Ryan Winkler (DFL-Golden Valley), the bill’s sponsor. 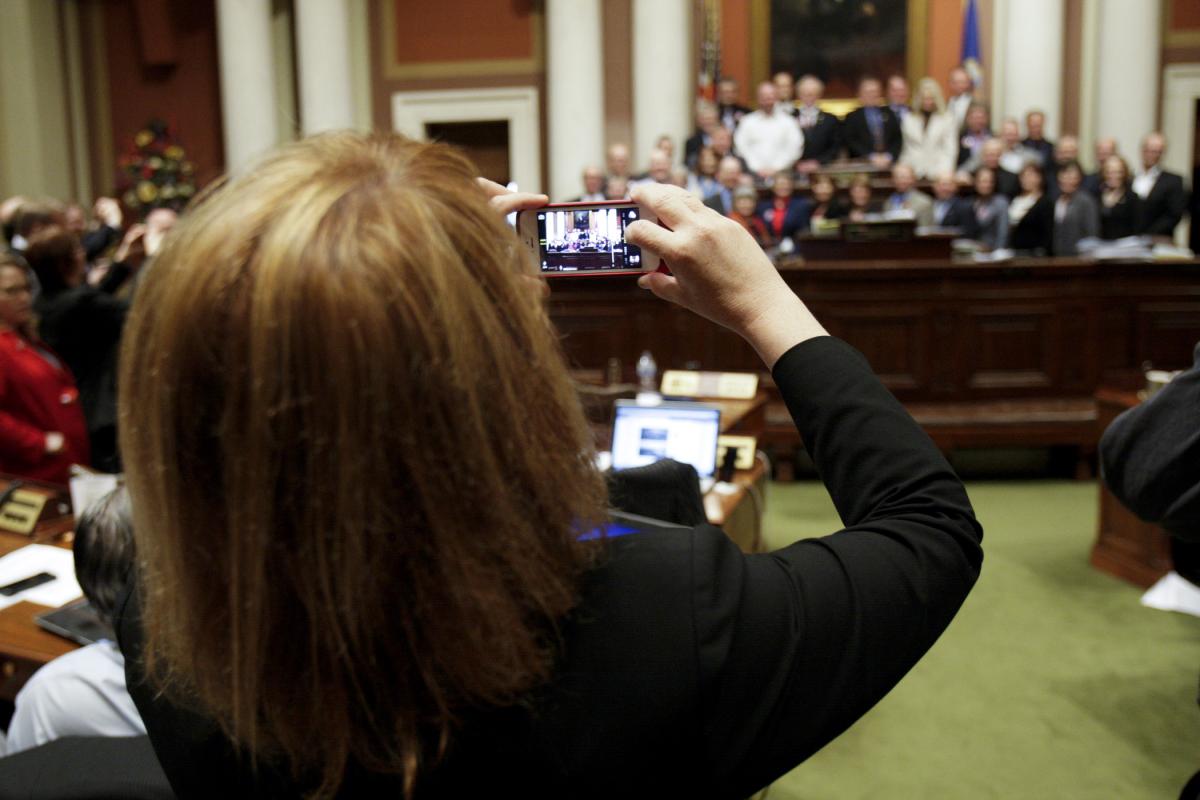 As the session reached the home stretch, Republicans influenced the negotiations on the bonding bill, as eight House Republicans were needed to reach the three-fifths majority needed for passage. Although lawmakers agreed at the end of the 2013 session to hold this year’s general-obligation borrowing to $850 million, Dayton in his April 30 State of the State address called on lawmakers to pass a $1.2 billion bonding bill. He said an $850 million bill wouldn’t be large enough to get full funding for the Lewis and Clark water pipeline for southwestern Minnesota, an area with a dearth of water but rich in GOP votes for a bonding bill.

The House and Senate moved a proposal that provided $22 million for Lewis and Clark, which was short the $70 million needed for the project. The issue was resolved when funding for Lewis and Clark was inserted into the tax bill and the cash bonding bill, a move that House Speaker Paul Thissen (DFL-Mpls) said was crucial for bringing the session to an orderly conclusion.

“I think the main thing that happened in the last 24 to 36 hours is we put our heads together to figure out a better way to resolve the Lewis and Clark water funding so we could get full funding for that. Once that piece fell into place, that really was the thing that broke everything loose,” Thissen said.

In addition to the money issues that lawmakers grappled with in the session’s final days was medical marijuana. The issue had simmered in the Legislature while Dayton expressed skepticism due to concerns from law enforcement. The issue breathed new life in early April when Dayton charged that legislators had “hidden behind their desks for the whole session while I’ve taken this on.” 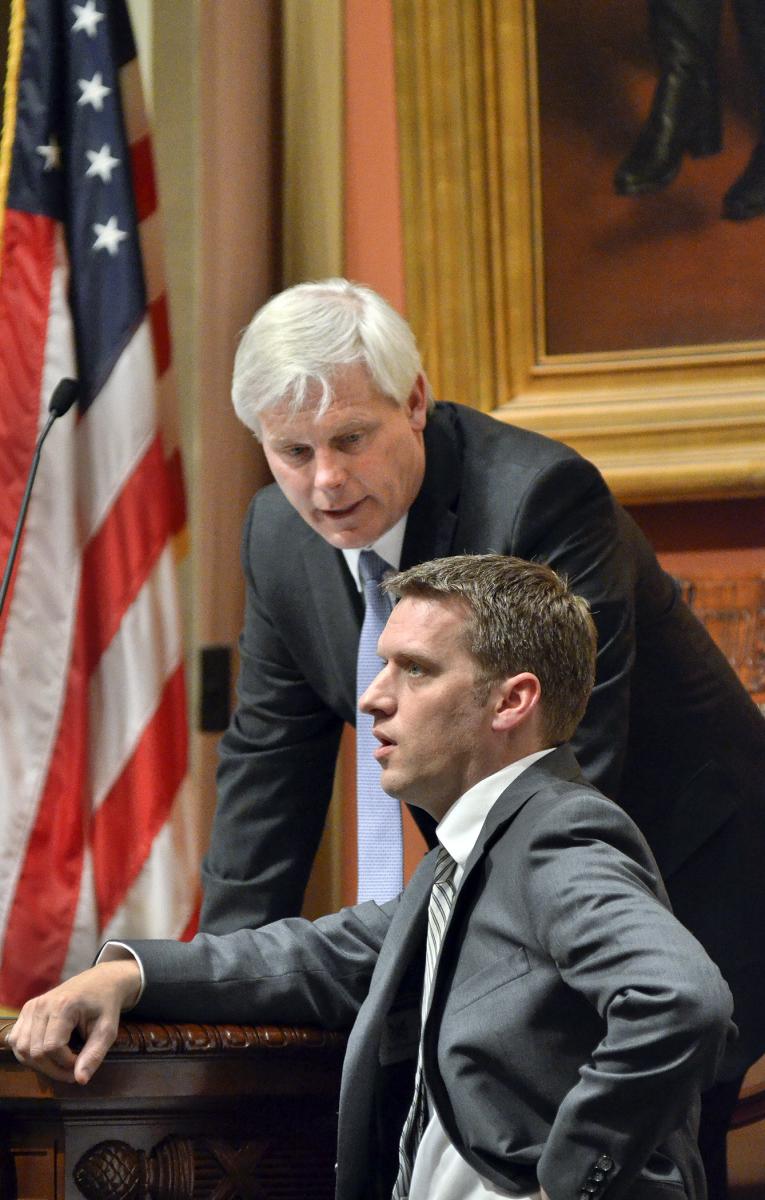 The issue proceeded with the House advancing a more restrictive version than the Senate. The bodies reached an agreement that was passed on the last night of session for two state-licensed manufacturers to produce marijuana for patients with qualifying medical conditions. The issue, Daudt said, “transcends partisanship,” and passed the House 89-40.

Left: House Speaker Paul Thissen and Minority Leader Kurt Daudt confer at the rostrum May 16, the final day of the 2014 session. (Photo by Andrew VonBank)

Medical marijuana and the minimum wage were two major policy accomplishments in a session that also saw passage of anti-bullying legislation and the Women’s Economic Security Act, which Thissen had touted as a priority.

“I think we did get a tremendous amount accomplished this year with the minimum wage increase, with the Safe Schools passage, additional tax cuts for Minnesotans. … I think we have a lot to be pleased about,” Thissen said.

The political focus now shifts to this November’s general election when Dayton and all 134 House seats will be on the ballot (the Senate doesn’t stand for election until 2016). The newly elected House is scheduled to convene for the 89th Legislative Session on Jan. 6, 2015.