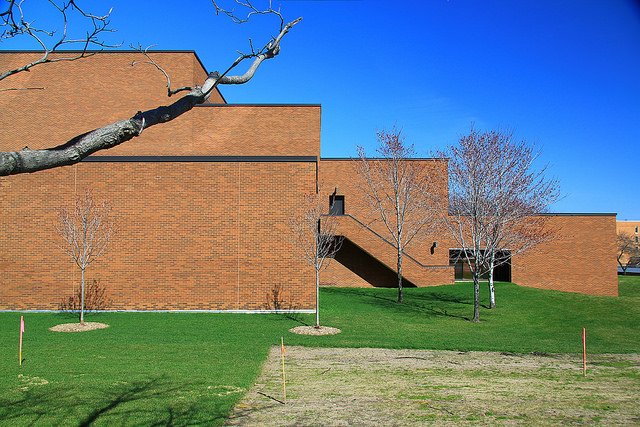 Pe Paul Goromou came close to getting booted out of the country.

Goromou, a Guinea native, sought asylum in the United States shortly after he fled his home, where he said the government tortured him for nearly a week, accusing him of being involved in a coup d’état.

But without a lawyer, Goromou was in danger of being deported, until a group — which included students and faculty members at the University of Minnesota’s Law School — stepped in to help him gain asylum.

Goromou sat in the front row of a packed auditorium at the University’s Law School on Tuesday to help celebrate the launch of the school’s new center that helps immigrants like him navigate the legal system.

The Law School’s Center for New Americans opened all three of its law clinics this fall after receiving funding from the Robina Foundation in 2013 to bolster legal services for immigrant communities nationwide.

“The resources here give the Law School an opportunity to make an impact on the students and, in turn, the immigrants they serve,” he said.

The center aims to aid immigrants facing legal issues like deportation, immigrants who frequently face difficulties like language barriers and little or no knowledge of the legal system, Casper said.

And since immigration courts are civil, Casper said, they do not offer the right to a public defender. That can make it difficult for a non-citizen to receive legal services because they often can’t afford a private lawyer, he said.

Minnesota’s large refugee population and the area’s history of pro bono work make it an ideal location for the center, Casper said, adding that it ensures the state remains “unparalleled” in its immigrant justice advocacy.

“The impact of creating an ethic of public service … in a community this size will really reinforce the strong culture of pro bono service,” he said.

So far, cases for the center have been plentiful, said Meghan Heesch, a teaching fellow in the center’s Detainee Rights Clinic.

Before the center’s official launch, students and law professionals began working on cases. This summer, the center — with support from its partners and help from clinic students — successfully petitioned to have one of its cases involving the deportation of a non-citizen heard by the Supreme Court. The court will hear the case sometime this year during its upcoming term.

Along with providing help for immigrants and refugees, members of the center say it offers valuable learning experiences for students.

The center’s three law clinics — the Federal Immigration Litigation Clinic, the Detainee Rights Clinic and the Immigration and Human Rights Clinic — help students sharpen their skills and get hands-on experience working with real clients and cases.

Thirty students make up the center’s clinics, which essentially operate as a law firm of student lawyers, Casper said.

Students “do all of the heavy lifting” by working on anything from writing briefs to arguing their cases in court themselves, Heesch said.

But students say learning how to be an immigration lawyer won’t come without its challenges.

Anna Finstrom, third-year law student and the Federal Immigration Litigation’s student director, said although they do everything they can for clients, obstacles can sometimes still appear.

“Even if we do our jobs the best we possibly can, a lot of times there won’t be an outcome that seems just,” she said. “We run up against that on a daily basis.”

Still, Finstrom said her involvement with the center offers the best opportunity available to hone her legal skills before graduating.

“The clinic has been by far the most valuable aspect of my legal education,” she said.