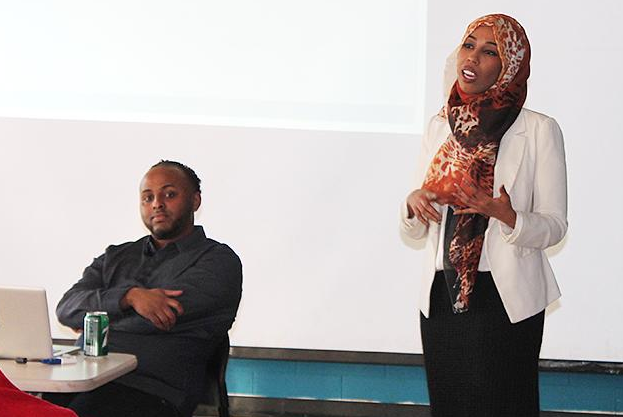 Late last week, scores of immigrants filled the seats of the dimly lit conference room in the Minneapolis Brian Coyle Center as a group of lawyers addressed the crowd about their legal rights when it comes to police interactions.

Local leaders of the North American Somali Bar Association brought their second educational event since its launch in January to the immigrant-populated Cedar-Riverside neighborhood to educate the community about their constitutional rights and responsibilities when dealing with authorities.

Among the presenters was Amran Farah, a Minneapolis attorney and an NASBA member, who spoke to a crowd of more than 50 people about possible scenarios of a legal encounter with law enforcement.

If an officer pulls over a driver, Farah explained to the crowd, that driver is being seized under the Fourth Amendment.  “It’s a seizure when a police officer has flashing lights on, and in that way, you feel like you’re duty bound to submit to that authority.”

At a time when a deep distrust exists between many police departments and many communities of color nationwide, Farah accentuated that an officer cannot legally stop someone because of the person’s skin color.

She said of the officers: “They have to be able to point to any traffic violation. They can’t just point to the fact that you’re black or you look suspect. They need specific and articulable facts that, taken together, builds this reasonable inference that it’s OK for them to stop you.”

All that said, Farah explained, it’s easy for an officer to stop a driver for a simple traffic violation: Your break lights are out. You turn right or left without signaling. You’re not wearing your seatbelt.

The “Interacting With The Police: Learn Your Rights” forum also highlighted the complaint process with the Minneapolis Department of Civil Rights and provided instructions on how people with a criminal history can expunge their records.

The Friday forum came a couple of days after a Minneapolis officer was caught on camera seeming to threaten to break the leg of a black teenager and after a white police officer shot and killed an unarmed black man in South Carolina.

At the event, some side conversations referenced those incidents while discussing the day’s presentations. Abdifatah Mohamed, NASBA member and student at William Mitchell College of Law, said in an interview later that the event was a response to the police violence across the nation

Mohamed added: “What we wanted to convey was that the police don’t have complete powers to behave and do whatever they want. At the end of the day, as citizens of this country, we have some protections and we have some rights — and it’s important that we understand those rights so the police don’t abuse that.”

Participants applauded NASBA for creating the opportunity to answer their legal questions and educating them about their rights and responsibilities.

Burhan Mohumed, a longtime Minneapolis youth advocate, said growing up in the Cedar-Riverside neighborhood, he realized that many people in the community don’t know much about their constitutional rights.

He added: “Our parents and elders genuinely believe that a police officer can do whatever he wants. It’s powerful when you look at the constitution and when you can look at all the amendments over time sort of protecting the individual, protecting the citizen.”

After a long discussion about whether it’s encouraged to record an interaction with the police, Mohamed concluded the discussion with one piece of advice. “General rule of thumb: be polite.”

He added: “There’s a Minnesota case that said you can record, but it’s in your best interest to be polite when you’re interacting with the police.”

From his seat in the audience, Minneapolis Police Department Officer Abdiwahab Ali joined the discussion: “If you give a police officer the distance to do his job, you can record it.” But the recording shouldn’t distract the officer from his or her job, he added.

Mohumed, the youth advocate, explained how each incident relating to a police shooting reminds the youngsters to be cautious about how they talk, walk or dress.  “There are so many things that I need to adjust just to walk out of that interaction alive,” he said.

And he had a similar message for the young immigrants: “Do what you need to do to walk out of that situation in one piece.”