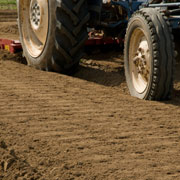 Coming off what looks like a record year for Minnesota farm income in 2012, weather watchers are concerned about what the cold, wet, snowy, icy April weather may be doing to this year’s agricultural prospects.

Complete data from the past year on all sizes of farms, and all types of farming ventures, will be released by USDA in October. But looking ahead, it is becoming evident that the extended winter weather conditions will impact Minnesota farmers differently depending on what crops they produce.

This much we know: winter-like weather conditions are keeping farmers out of their fields, pushing back the statewide start of fieldwork by from one to two or more weeks. This we also know: persistent rain and snow is improving topsoil moisture conditions throughout the state but two-thirds of Minnesota’s landmass is still under drought-like conditions for subsoil moisture.

In this, the first of a two-part series, we look at potential weather impact on the state’s larger commercial farmers who produce major field crops of corn, soybean, small grains and sugarbeets. We turned to two of the keenest agricultural observers around and asked this question:

Which is more important, timely spring fieldwork or recharging the moisture in the fields?

“I know which farmers would prefer,” said Jim Ruen, a veteran agricultural writer at Lanesboro, in southeastern Minnesota. “They want to get into the fields now and hope for rain later.”

That impatience might be understandable, adds Gary Ling, a former full-time farmer and tiling and drainage business operator at Round Lake, in southwestern Minnesota. “But I can tell you which is far more important this spring. We need the moisture.”

Data released April 15 by the Minnesota Field Office of USDA’s National Agricultural Statistics Service (NASS) show why recharging soil moisture is important, and could be described as critical. Subsoil moisture across the state is now listed as 23 percent very short, 43 percent short, 31 percent adequate, and 3 percent as surplus.

Ling said the water line in parts of southwest Minnesota is well below the depth of corn and soybean roots. That subsoil moisture is needed to sustain plant life during summer dry spells.

The irony is that Ling had been without power for four days when contacted for this article. He had a generator working in a shed to keep the lights on in the farmhouse. The Round Lake area near Worthington had been hit with several inches of ice as an undercoating for about eight inches of snow, damaging buildings and trees, and taking down power and telephone lines.

Before ice, rain and snowstorms began working across Minnesota, Ling said his area farm fields were dry. “You’d kick up dust just walking on it,” he said.

Because of that, the blustery April weather is doing some good for agriculture, plant life and the people who depend of food and animal production. The NASS weekly crop and weather report for April 15, showed only 5 percent of Minnesota had very short topsoil moisture conditions, 17 percent was short, 61 percent was described as adequate, and 17 percent was listed as surplus.

That should signal there would be sufficient topsoil moisture to get seeds germinated and growing this spring once farmers do get into their fields.

NASS field observers now forecast that May 1 will be the statewide average start date for full-scale fieldwork. That date was pegged at April 15 a year ago, and the full-scale start of Minnesota’s farming season has averaged April 21 for the past five years.

“As a rule of thumb, farmers around southern Minnesota want to get their seeds in the ground as close to May 1 as possible,” said Ruen, who writes for several agricultural publications. That allows for some delayed plantings and replantings of low lands where water often stands before running off or soaking into the ground.

Much of the late spring snow melted and ran off in rivers and streams, Ruen said. The topsoil moisture was frozen; spring melt didn’t sink into the ground.

That will most likely be the problem going forward in northwestern and west-central Minnesota counties being hit with late-season snowstorms, Ruen added. The threat of flooding from a quick thaw along the Red River of the North and its tributaries is a reminder that, like last year, Minnesota can experience flooding and drought in the same year.

“When farmers have money, they spend it. They’ve been spending a lot of it on equipment,” he said. “The equipment available now could plant all of this year’s crops in at least a week of good weather, and most farmers will probably get their planting done in two to three days.”

That has Ling siding with the argument to replenish moisture for good old Mother Earth. But timing is extremely important for some of Minnesota’s smaller farmers who grow vegetables for Farmers Markets sales and Community Supported Agriculture (CSA) farmers. That will be the subject of a forthcoming article.