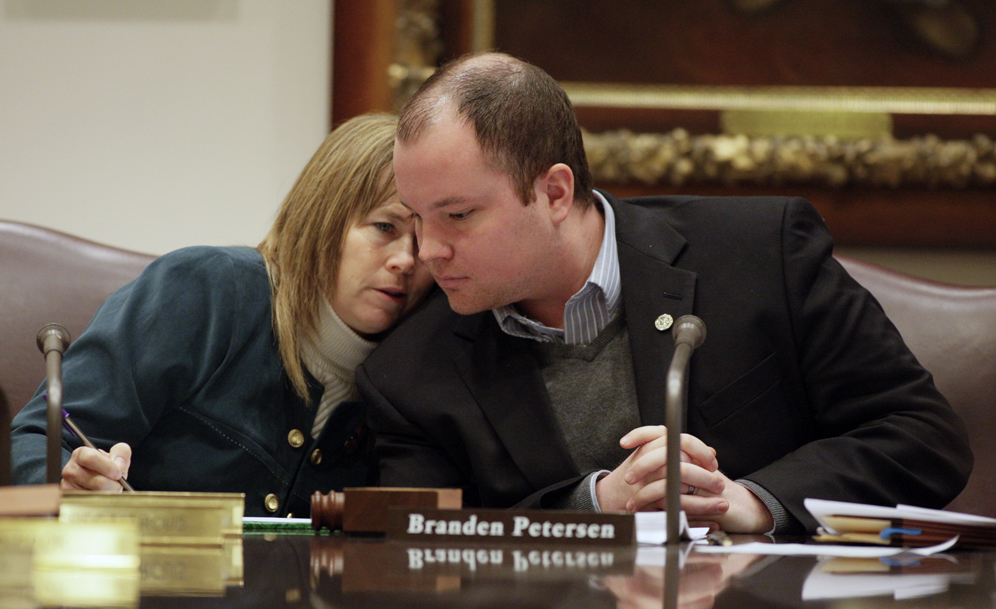 At the age of 10, Rep. Pam Myhra (R-Burnsville) had no reading skills. Her Bloomington fourth-grade teacher had instructed her, a native Spanish speaker, to get homework answers from other students.

In fifth grade, everything changed for Myhra. Her teacher, who was new to the district, helped her work her way up to grade-level reading. Myhra said that while this teacher was effective and had experience in other districts, this did not make her immune to layoffs.

“My teacher who changed my life, gave me a future, was no longer going to teach in our school. She moved back to New York. My fourth-grade teacher that abandoned me to illiteracy and frustration — quite honestly, hell — still taught,” Myhra said.

This is why she voted in favor of the controversial “Last In, First Out” bill approved by the House March 16.

Currently, school districts use teacher seniority as the prime determinant for layoffs. HF1870 would authorize schools to base layoffs on performance evaluations, with emphasis on seniority drastically diminished. The bill is now being worked on by a conference committee.

Rep. Branden Petersen (R-Andover), the bill’s sponsor, said it is a “logical next step” following Minnesota’s receipt of a “No Child Left Behind” waiver earlier in the year. The federal waiver outlines certain steps Minnesota must take in its statewide education program, including implementation of quality standards for teachers. Petersen said that layoffs are no exception to the needed reform in public schools.

He acknowledges the benefits that seniority can bring to the classroom, but argues that experience does not necessarily lead to better teaching skills.

“If I start working on my free throw and do that for five years, at the end, I’ll be better at it. But that doesn’t mean I should play in the NBA,” he said. “In individuals, yes, experience makes you better, but not in aggregate. A teacher with five years (experience) could be the most effective. But someone with three years could be, too.”

Critical reform or an attack?

Louise Sundin, president emeritus of the Minnesota Federation of Teachers, is one of the bill’s critics. As a testifier against the bill in the House Education Reform Committee Jan. 31, she likened the bill to a familiar television program.

“When I was having a hip replaced not too long ago, I did not seek out Doogie Howser,” she said.

As the bill progresses through the conference committee two months after that initial committee meeting, Sundin’s opinion has not changed.

“We are trapped in an industrial model of a top-down power structure that is of a boss and line workers. That is not appropriate for this profession,” Sundin said. She feels that this bill exacerbates a damaging dynamic.

Sundin is one of a group of educators who view this bill as one part of this session’s continued assault on the teaching profession. Lawmakers have passed other bills to similar protests, including one which requires teachers-to-be to pass a basic skills exam to receive licensure.

“This sounds like one more case in which we aren’t valued, believed or appreciated,” said Sundin.

Perhaps the greatest worry of some educators is the nature of the evaluation that would determine which teachers keep their jobs. Though most anticipate it will include measures involving student test scores and academic growth, as well as in-class monitoring of teachers, the specifics are still under development by a work group in the Department of Education.

That uncertainty has led the bill’s critics calling it a premature step in education reform. During the March 26 conference committee, Education Commissioner Brenda Cassellius warned of unintended consequences that could be ultimately damaging for Minnesota schools.

Cassellius agreed that change is needed in education, but asked lawmakers to take a measured approach to possible solutions. She believes that local decision-making is the best answer to what legislators are calling a growing problem.

“We have an urgency in schools to do better … (But), I think fundamentally, principals know their teachers better than we do. They should make that decision,” she said.

Casselius’ viewpoint is in stark contrast to that of many proponents, including Myhra.

“Here was a teacher who helped me make the change. … I think this has been a slow process — painfully slow for students who have never had that,” she said.

Some educators agree that this bill could actually help teachers who are changing students’ lives.

During a March 23 meeting of the conference committee, members heard testimony from George Parker, a former union leader and math teacher from Washington, D.C. He explained that he supported the reform of layoff practices in the schools that he represented.

“As a union president, I saw some of my best teachers have to leave because they had not taught one year or two years as long as someone else,” Parker said.

As someone who initially opposed the removal of “Last In, First Out,” he said, “Maybe I was part of the problem.”

Parker now believes that “Last In, First Out” disproportionately affects students in inner-city schools, who are often minorities or economically vulnerable. He said that those schools often hire newer teachers, who are let go first. That creates an instability that hurts the districts that need the most help.

Myhra echoes the need to repeal “Last In, First Out” as a step toward closing Minnesota’s achievement gap. She believes that leaving it in place counteracts recent efforts to draw in minority teachers to the field.

“Minority teachers are often the last ones in. We need to have a mechanism to keep them in place to help effectively teach minority students,” she said. Myhra says that the bill could help students “beat the odds” as she did.

While not all teachers believe an end to “Last In, First Out,” or LIFO, as it has been termed, will hurt schools, several of Minnesota’s education representatives urge lawmakers to consider alternative methods of addressing layoffs.

Jan Alswager, chief lobbyist for Education Minnesota, claims the teachers she represents do not oppose ensuring quality instruction, saying they “stand right by your side in wanting to do this.” However, she added that designing an extensive teacher improvement program for those who struggle to succeed is a better method to improve teacher quality.

She said that this method could more effectively help remediate teachers in need of improvement. If such a program was not successful for some educators, she said that disciplinary action could be appropriate.

“You can’t fire your way to better teaching and learning,” she said.

The value of teacher remediation is one, if the only, area where they and Petersen agree.

“Absolutely we want to use a remediation process in a normal school year. But I can’t think of an argument about how this (bill) doesn’t benefit the students,” Petersen said.