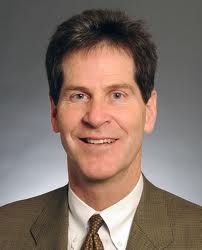 Higher education is in a transition period right now, according to Larry Pogemiller, director of the Minnesota Office of Higher Education. He says there’s a growing recognition that higher education is basically a market system, not a public system, like K-12. All colleges, he believes, have a vested interest in how we can better facilitate higher attainment and higher quality education. Governor Mark Dayton’s budget calls for a balanced new investment of $240 million in higher education: $80 million for direct student aid; $80 million to the Minnesota State Colleges and Universities (MnSCU) system; and $80 million to the University of Minnesota. But direct student aid, he believes, enjoys more support than aid to institutions. He calls the governor’s funding proposal for early childhood education also an investment in postsecondary education. Minnesota baccalaureates who incur debt have the third highest average debt ($29,800) in the nation. And the percentage of Minnesota students taking on debt (71 percent) is the fifth highest in the nation. As Minnesota moves into the arena of Massive Open Online Courses (MOOCs), Pogemiller believes the state must pass a law to cover the possibility of some MOOC providers offering credit for their classes. He says an effort to redesign grades 11 to 14 is basically dismantling high school and redesigning it to do a better job of personalizing it. A new application for digital devices could help students keep track of their academic accomplishments and explore possible career paths. Finally, Pogemiller is stunned at how challenging it is to create change in higher education.

In response to a question, Pogemiller said his office registers the colleges, which is “not quite as heavy as licensure.” He said the office compares the faculty and course information the colleges provide to check whether they have enough capacity to do what they say they’re doing. It’s short of going in and finding out if they’re delivering a quality baccalaureate. “We don’t have the resources to do that,” he remarked.

He commented, though, that “for-profit colleges will drive themselves out of the market if they don’t show better graduation rates.”

Higher education is in a transition period right now.

Pogemiller commented, “There’s a growing recognition that higher education is basically a market system, not a public system, like K-12. All colleges have a vested interest in how we can better facilitate higher attainment and higher quality education.”

The governor’s budget calls for a balanced investment of $240 million in postsecondary education, focused on three things:

“The governor has decided to do this in a balanced fashion,” he said. “A real hard-core person would say, ‘Why give any money directly to the institutions? Let them figure it out. They’re in a market system.'”

An interviewer asked whether an increase in state grant funding would encourage colleges to increase prices. Pogemiller answered that about 25 percent of students get state grants and that’s not enough to drive price. He said that research at the federal level has found that the federal Pell grant, which is a much bigger number, doesn’t drive price.

“Because of our demographics, if you don’t have this emerging population of poor kids and kids of color prepared to be successful in K-12, we have no chance of maintaining our high level of postsecondary attainment,” Pogemiller said.

Minnesota needs a law accommodating the possibility of credit being given for free online courses.

In response to a question about the University of Minnesota announcing a partnership with Coursera, a major provider of Massive Open Online Courses (MOOCs), Pogemiller said Coursera is moving rapidly toward credit and accreditation for the courses. “We have to draw a Minnesota statute that accommodates the possibly that there might be credits here,” he said. “Currently, if you offer credits and if you charge somebody, you have to pay a fee to Minnesota to be registered. That would have been several hundred thousand dollars for Coursera. We have some kind of responsibility for consumer protection, so we’re going to try to find a balance between registration and openness that allows the University to partner with these emerging providers.”

Pogemiller said we should use MOOCs in a blended-learning approach to enrich classroom learning. This should lead to a much richer combination of technology and face-to-face mentoring that will allow better education for more people. “Faculty will be what they’ve always said they wanted to be: Socrates in the cave,” he said. “They’ll be guiding and, in a Socratic way, helping students learn.”

Pogemiller’s office is recommending to the Legislature that the governor be given the power to appoint the chair of the Higher Education Advisory Committee.

“It’s more likely the governor will follow the advice of the committee if he appoints the chair,” Pogemiller said. In response to a question, he said neither he nor the governor would oppose having generalist citizens on the board. “If the group gets too large, it can’t go anywhere,” he continued. “We must try to find the correct balance between key players and public input. Twenty or thirty people are way too many.”

Elected officials have less control than they might assume over the amount of tuition postsecondary institutions charge.

An interviewer asked about student debt and the discounting of list-price tuition through scholarships. He commented that with steep rises in tuition, families now feel that even the discounted tuition is too high. Some schools have already discounted their tuition by 50 percent, which the interviewer called unsustainable.

Pogemiller responded that over the last 10 years, growth in tuition has outpaced both inflation and growth in family income by three times. Through the state grant program, elected officials can provide some semblance of access to low- and moderate-income people.

“If you believe in student choice, let’s protect lower- and lower-moderate-income people with the state grant program to allow them to choose the best college for them,” he said. “Let the institutions take care of their own price model. We try to put out the best information to consumers to allow the market forces to work. Collecting data about who is successful and in what environment will help us understand that more directly helping families get to the institution that best fits their students’ needs is the right path.”

Average debt for Minnesota baccalaureates who incur debt is $29,800, third highest in the nation. Pogemiller said Minnesota is fifth highest in the percentage of people who take out debt: 71 percent.

He noted that $7 billion is spent in Minnesota on higher education. Of that amount, between 75 percent and 82 percent comes out of families’ pockets. The bulk of the money is not public money. The fastest growing part of the family contribution is debt.

Pogemiller, MnSCU Chancellor Steven Rosenstone and Commissioner of Education Brenda Cassellius are working on a redesign of grades 11 to 14.

He outlined three kinds of students in high school:

“The technology is absolutely out there to create this application,” Pogemiller said. “This is going to be a living, breathing, evolving plan that the students own. It empowers the young person to see some vistas they might not otherwise see. This is not a panacea; it’s in addition to counseling and adult faculty input.”

This would allow schools and faculty, he said, to personalize what they’re doing with each individual student in order to make the time they’re spending with students productive. It could lead to faculty designing particular types of courses for their cohorts of students.

Change in higher education is challenging.

In conclusion, Pogemiller said, “As someone who spent most of his time in the Legislature on K-12 education issues, I’m stunned at how challenging it is to create change in higher education.