Sound the trumpets!!! Notify the press!!! I have achieved one of my deeply desired life goals! Nope. I haven’t learned to play the banjo. This is even better.

Hubby and I have received our marathon confirmation packets in the mail. Iffin’ you don’t know, you don’t get to show up on race day and just pick a spot in line. On the back of your packet there is a little number; 1, 2, 3. These are the corrals. You are assigned a corral based on your recent race times and I don’t know what else… astrological sign and dessert preference, I guess. I have always, and I mean always, been in the way back, the way-WAY back, the nosebleed corral. The Ghet-to corral. The “aren’t you sweet for trying, here, have a sucker and sticker” corral.
It is a jovial corral, with much joking among the participants about our high chances of “taking it all!” How they only stick us here, out in limbo, to slow us down and give the Kenyans a chance. What we lack in speed, we more than make up for in sarcasm.
No more, people.
I am assigned to…. Corral number TWO!!!!! Do you know what this means?!! I’M IN THE MID-DLE! I’M IN THE MID-DLE! It is ridiculous how happy I am. I’m so happy it almost makes up for this Joyce DeWitt she-mullet I’ll be growing out for the next year. Almost. 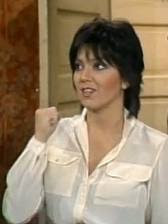 Curses!
Hubby (coral number three) can’t roll his eyes at me enough.
“Yup,” he’ll snort, “and next year, corral number ONE. I mean, you’re only forty-two years old…” and then he starts snickering.
He keeps this up and I’m going to rope off both the bed and the couch… and guess which one will be labeled “corral number three?” (Hint; it’s the couch.)
I’d say that he’s jealous, except he’s not. He’s totally, totally not. He is just amused and fascinated by the illogical workings of his spouse’s brain… because he knows what’s coming next.
In an instant, I careen from elation to utter despair. Why didn’t I lose 15 pounds? Why didn’t I do as much cross training as I should have? Why didn’t I ever make it to a running clinic to work on my craptastic running form? I’ve got a spot in corral number two and I am totally going to BLOW it. Next year they’re going to create a NEW corral, just for me. They’re not going to let me start until the winner is finished, showered and on route to the airport, giant novelty check safely in hand.
Oh, the humanity.
You see, despite what Hubby sees as my illogical, pie-in-the-sky aspirations, I know that the clock is ticking. I am completely aware that attempting to take up distance running in your forties is, well, ridiculous. I am completely cognizant of my limitations; I just took more than a week off of running- with the marathon a week and a half away! -because when I rest my hand on knee while swinging my leg back and forth, it feels like my kneecap is rolling across loose gravel. As imaginative as I can sometimes be, I haven’t yet come up with a scenario in which that is a good thing.
So who knows if I will EVER get to run in the middle again? There’s a really good chance I’ll have to become one of those runners with a schtick; like, I’ll be in the back, but I’ll run the whole thing in a animal costume…
… or possibly, while playing the banjo. Yeah. I could do that.