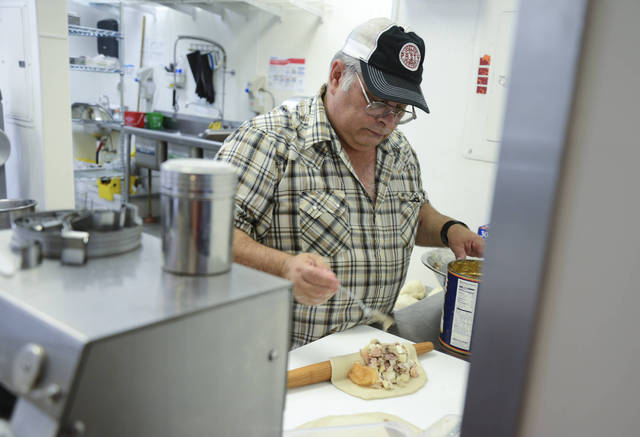 For six months straight, John Earl ate more savory pies than he could stomach in search of the perfect crust.

That refined recipe is now featured across the menu of his new Dinkytown restaurant, Lands End Pasty Company, which specializes in pasties, traditional handheld meat pies. Earl and his nephew, Pete Jacobson, opened the eatery at the end of June.

The many trials of dough were worth the bellyache, Earl said, though they temporarily dampened his desire for the British lunchtime staple.

“I don’t want to say I don’t still want them,” Earl said. “But after that long eating pasties, it takes two months for me to start craving them.”

The loosely British-themed Lands End, which is tucked away at the end of Dinkydale mall on Fourth Street Southeast, has tables and chairs for patrons to sit down. But in Cornwall, England, where the handheld pies originated, pasties are typically eaten on the go.

“They’re usually not much more than wagons,” Earl said of traditional pasty shops.

The portable nature of pasties is one reason the nephew-uncle pair decided to open shop in the heart of Dinkytown.

“Students can grab them and go and eat them on the way to class,” Earl said. “It’s the perfect demographic.”

But while pasty shops are well known throughout the United Kingdom, Jacobson said, only one in three people he meets in Minnesota are familiar with the British fare.

“They’re newish things here,” he said. “They could become very popular, though.”

Potter’s Pasties, a restaurant that opened on Como Avenue Southeast last year, has a food truck that began selling pasties on the University of Minnesota campus last month.

“When we first heard about [Lands End] opening, we were unsure because we thought there would be some competition,” said Potter’s Pasties manager Anders Kvaal. “But competition’s good, and it will just help spread the word about pasties.”

Though Lands End features conventional pasty flavors, it also serves up new twists, like steak and bleu cheese or chicken, mushroom and bacon varieties. In another unique flourish, apple pie filling graces the bottom corner of all the shop’s pasties.

That’s one way the co-owners’ “a little bit eccentric and old-fashioned” personalities shine through, Jacobson said.

However, he said classic pasties — which in Britain are stuffed with locally sourced ingredients like rutabaga, onion, potato and minced meat — have been Lands End’s most popular in the store’s first weeks.

“We’ve even had a couple English guys come by and have some pasties,” Jacobson said.

The shop currently serves eight different varieties, but Earl said it’s looking to expand — even to Minnesotan flavors like chicken and wild rice.

The pair began mulling over the concept of a Minneapolis pasty shop four years ago after Earl visited the Lands End’s namesake, an area at the southwestern tip of England.

Until then, neither had heard of a pasty, much less eaten one.

“Everyone told me I should start making them,” Earl said.

When Earl was laid off in 2010, he and his nephew began seriously entertaining the idea of opening a pasty business.

Walls adorned with pictures of Cornwall and a monitor that screens only British TV shows are Lands End’s homage to the West Cornwall Pwasty Company, the British chain of shops where Jacobson and Earl sampled their first pasties.

Though the two relatives are Lands End’s only full-time employees — supplemented by Jacobson’s father, who works part time — they’re hopeful that their business and menu will catch on.

“We’ll need to hire a few more employees,” Jacobson said. “But right now, we’re just seeing if it will work out.”