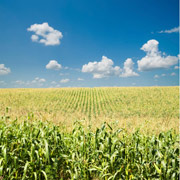 Country coffee shop talk in southwest Minnesota has land prices soaring to around $10,000 an acre for prime farmland that will go on the market once the harvest is done.

Some who’ve heard the talk are asking, “Can this be real?” The answer appears to be, “Yes,” in some circumstances. That is when a neighboring farmer might be tempted to pay such high prices for convenience of next-door or nearby property.

Minnesota 2020 warned in 2008 that farmland might be forming the next big bubble after the housing markets crashed (Minnesota Bubble Economy: The Critical Need to Prevent Our Farmland Boom from Busting), partly in recognition that the same economic factors crashing residential and commercial property will eventually spill over on agricultural land as well.

That hasn’t happened yet. But there are two newer elements coming to play on the farmland markets that could still make a farmland crash possible.

Second, and potentially more significant, is how the U.S. dollar fares in global exchange rates as the European Union wrestles with Greece’s and other member nations’ financial problems, and how China deals with its rising inflation problems. The most remote farms in Lincoln and Jackson counties, or Polk and Norman counties, are directly linked to economic conditions around the world through trade.

Weakness in the euro, or problems in China and other major trading partners, almost always raises the exchange rate value of the dollar against other major currencies. This prices comparatively inexpensive American commodities out of trade channels as countries with weaker currencies ration their imports.

We are likely seeing that happen now, just as we did in the 1980s leading to the 1982-1987 farm financial crisis. Both corn and soybeans, Minnesota’s leading export crops, have lost more than $2 a bushel since setting season highs in late spring. The Wednesday opening corn futures price of $5.88 per bushel does not buy $10,000 an acre cropland.

Proceeding with caution into farm property purchasing would be a wise idea.