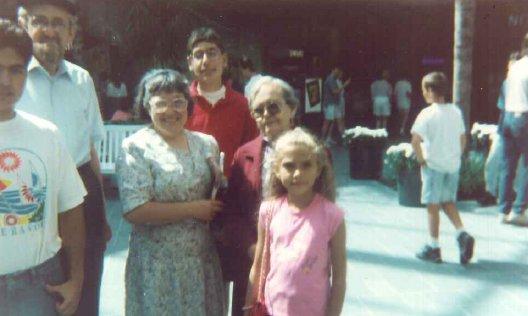 “It was so fun to sit in this little thing.”

As Soviet immigrants entered the United States, host families volunteered to make them feel welcome. Veronica Gagnelius’s family was paired with Rabbi Barry Woolf and his wife Zena. “They taught us how to function in America and gave us a lot of advice on adjusting to American life,” says Veronica, “You can’t even imagine how grateful we are to them, to this day.”

This is Part Two of Veronica’s Story. If you missed Part One you can read it here.

Veronica and her host family at the Mall of America

One of Veronica’s earliest memories of her host family was her first Sukkot celebration. “I didn’t really know what Sukkot was,” she says, “But they gave me a Barbie doll and I thought it was so fun to sit in this little thing.” The holiday is still one that Veronica and her family celebrate every year.

Tears of happiness and frustration

Adjusting to life in the land of the free was refreshing. In Belarus, money was tight and food was hard to come by. Food shortages were common across the former Soviet Union, and shoppers waited in lines of hundreds to buy groceries. For Jews, those waits were peppered with anti-Semitic insults. Veronica and her family weren’t prepared for how simple a trip to the grocery store would be in the United States. “My mom cried the first time she entered a grocery store in America,” remembers Veronica. “There was just so much.”

There were tears of happiness, but also tears of frustration. While the luxuries of the United States were apparent, adjusting was challenging for the whole family. Veronica started second grade with little English. “It’s funny,” she says, “In Russia, we weren’t Russian. I was a Jew and my family was picked on. Here, I wasn’t American. I was picked on for being Russian.”

Jewish Family and Children’s Services of Minneapolis (JFCS) assisted Veronica’s parents in their job search. When the couple found jobs, they worked tirelessly to make a new life for themselves. “I remember my dad worked in a balloon factory at one point,” Veronica laughs, “They made money any way they could.” Veronica’s mother worked as a housekeeper for a wealthy family and came home crying many days. “She couldn’t understand what the family was trying to tell her,” remembers Veronica, “It was so hard for her.”

Soviet immigrants around the world were having trouble adjusting to their new lives. In Israel, Natan Sharansky recognized this problem and formed Y’israel B’aliyah, a political party to address integration needs. In 1994 the party won 7 seats in the K’nesset and Natan was appointed Minister of Industry and Trade, increasing funding for immigrant absorption programs. He remained in Israeli government until 2006.

In Minneapolis, the Jewish community increased its integration programming and services for new immigrants. The host family program proved to be a success, JFCS continued to provide career counseling, and community “Kibitz Connection” events taught Jewish customs to new immigrants. The Sabes JCC hosted holiday celebrations for new immigrants, where many of the community’s Soviet Jews lit a menorah for the first time. Veronica’s family received food and clothing from the St. Louis Park Emergency Program (STEP).

Veronica made a concerted effort to minimize the ridicule from classmates. “My big goal was to learn English and get rid of my accent,” she says. While she felt more and more American as time passed, it wasn’t until high school that Veronica no longer felt like she stood out.

Today, Veronica values the fellow immigrant friends she grew up with in Minneapolis, and still speaks Russian with her family. However, says Veronica, she feels patriotic in a way she’s not sure those who were born here understand. “I know how good we have it here, and I value every freedom that I have,” she says. “I haven’t gone back to Belarus. Why would I want to visit a country that put us through hell, that we worked so hard to get out of?”

“Sonya Aronchik [the aunt that fought diligently to get the family to the United States] and Natan Sharansky are the reason why we’re here,” says Zena Sirotin, Veronica’s mother. It’s a statement the entire family stands behind. “If Natan hadn’t fought for his right to aliyah and eventually immigrated,” adds Veronica, “No one else would have opened their doors.”

Natan Sharansky hasn’t stopped fighting for human rights. Currently, he serves as the Chairman of the Jewish Agency for Israel (JAFI), a Minneapolis Jewish Federation partner agency. With JAFI, Natan is still involved in Soviet Jewry, reconnecting them to the Jewish heritage they lost under communism. JAFI also rescues Jews from countries of distress and aids them in making aliyah, as well as provides opportunities for Jews in the Diaspora to experience Israel through Birthright and Masa.

Today, Veronica is 28 and a California State University-Northridge graduate. After starting her own design business and sustaining a worldwide clientele for ten years, Veronica took a graphic design job at Federation. “JFCS helped my parents with their job search, and they worked hard to be able to buy a house after only two years. I got scholarships to go to JCC camp for free, and today my grandmother benefits from programs for Russian seniors, like VOICE,” she says. “As I learn more about where I work, I’m realizing that none of what was done for my family would have been possible without Federation. It means so much to me to be able to give back to the community that gave so much to me.”

Photo: Veronica giving a presentation on her journey from Belarus