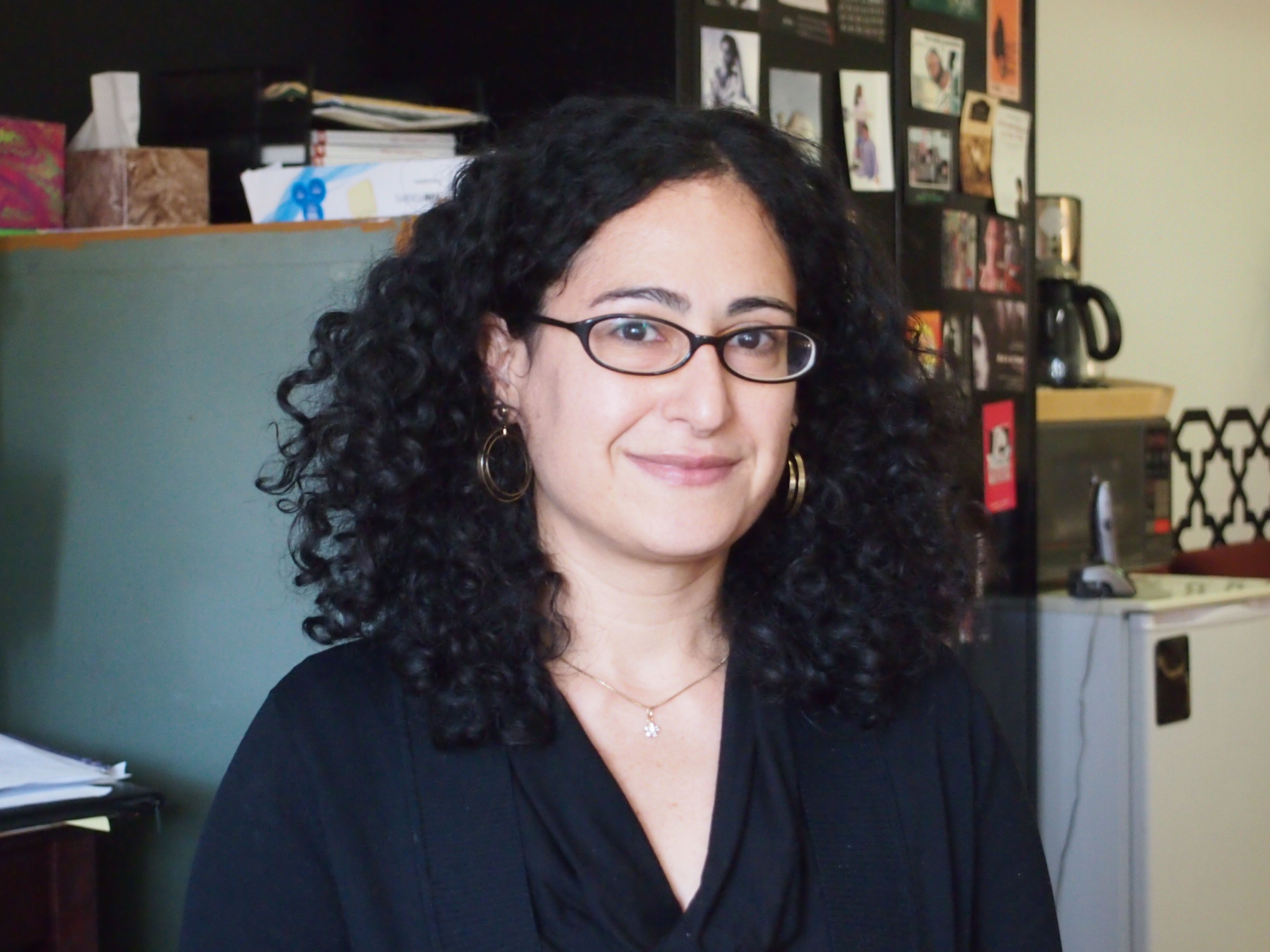 Next time someone starts ticking off the great things about the Twin Cities arts scene—dozens of theater companies, generous government funding, world-class museums—stop and make sure they mention Mizna, one of the country’s most important Arab-American literary and cultural organizations.

Founded in 1999 to publish a literary journal that is now widely-read around the world, the organization today is additionally responsible each year for a series of events in the Twin Cities and beyond. Most prominent among them is the Arab Film Festival, which takes place about every year and a half and is currently running at the Heights Theatre.

When I paid a visit recently to Mizna’s headquarters in Northeast Minneapolis’s California Building, preparations for the film festival were coming to a head. Mizna director Lana Barkawi took a break from the hubbub to sit down and talk with me about her life and work.

Tell me about your background—how you came to Minnesota, and to Mizna.

I grew up moving between the Middle East and the western United States. I spent years in Kuwait and Saudi Arabia, and a few years of elementary school in Amman and Jordan. I’m Palestinian; both my parents were from refugee families in Jordan. It’s the Palestinian condition to always be traveling, and my parents embody that: always looking for a place to put down roots, having been uprooted. That’s the way I think about my family, always moving around. My dad worked in international construction, so he had a few jobs that took him different places. Then we settled in Las Vegas when I was in fifth grade, and we stayed there until I graduated from high school—at the time, Las Vegas was going through a building boom. Now my parents live in Sacramento, California.

I went to grad school at the University of Nevada at Reno, and moved to the Twin Cities to finish my degree. I moved here in 1998, and finished my training. I studied biochemistry—insect pheromones—then I did a post-doc in plant biochemistry. I had heard about Mizna and spoken word events they were doing. I subscribed to the literary journal, and I was so amazed to know that this kind of work was happening—and that it was actually local. When I had time, I reached out to Mizna to see about volunteering. I was really happy to find this community of Arab-Americans who were interested in art and culture. I joined the board and started editing the journal in 2003, with the journal’s editor Lisa Edwin. I was assistant editor for a few years, then a few years after that I became executive editor and Lisa stayed on as editor.

When Kathy Haddad stepped down as executive director in 2010, I just felt compelled to join the staff and to take what I had seen of Kathy’s vision and her passion for the organization and decided to see what it would be like to be leading it. I’m so passionate about Mizna, I definitely wanted to see it continue and grow, and with the board’s support I decided to take the position. 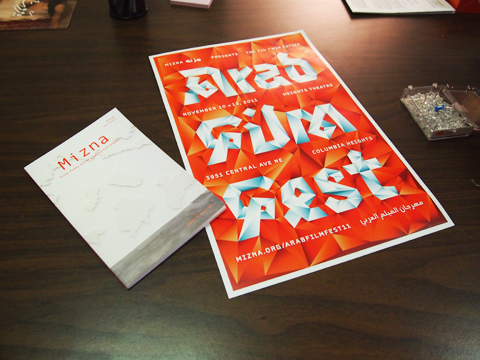 How did it come to be that one of the country’s most prominent Arab-American cultural organizations was founded in Minnesota?

It’s really about Kathy Haddad, co-founder and former executive director. She noticed in the late 90s that there was a real need for a space for Arab writers, a space dedicated to them. She started working with the local American-Arab Anti-Discrimination Committee, working on their newsletter. She created a small segment for people to publish their prose and poetry, and she got an overwhelming response. She realized this was a real void to think about filling, and she started the organization to publish the Mizna journal. Immediately we started receiving submissions from all sorts of writers: emerging voices as well as established voices like Naomi Shihab Nye and Suheir Hammad. These were people who were being published in the non-ethnic presses, but were really heartened to find that this was happening.

What are your goals for the organization as director?

I’d like to really strengthen our two main programs: our literary journal and our Arab Film Festival. Those are two very longstanding, strong programs with a good following of people who are fans, but there are ways that both of those can grow and have even richer futures. I’d like to see a digital version of the journal. I’d like to see the film fest be on an annual schedule—it’s been on about an 18-month schedule. It would be nice to say that our festival is always [at the same time each year], but that’s all tied to funding.

What are the biggest challenges Mizna faces?

When you put out this kind of art and create this kind of space for artists to present their work and creativity in an unfiltered way, that’s a rare opportunity for people in this culture since the media, whether print or film, really want Arab artists to fit certain parameters. With Mizna, artists have space for whatever it is they want to create, whether it’s on Arab-American themes or not. One of the challenges we face is that people look to Mizna to have a response to all the current political goings-on around the world, when what we really are is a forum for artists. When artists are moved to respond to these events, then we’ll present that work—but that’s not primarily what we’re about.

Another challenge—and it’s a good challenge—is that there’s an amazing number of creative, innovative, cutting-edge Arab writers and filmmakers. We would love to grow so we can give more of them a stage for their work. 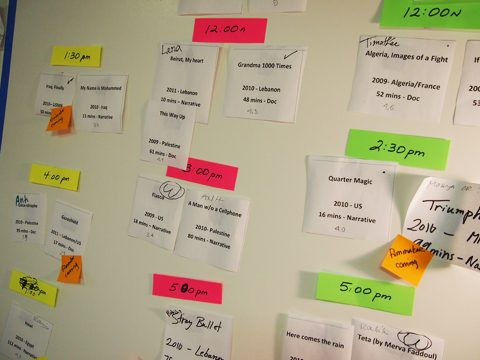 How would you describe Arab-American literature? What does it have to say to those not of Arab descent?

It’s hard to distill it into one message. There are multiple answers.

For the Arab-American community itself, it’s moving to read your own stories. It’s hard to overemphasize how empowering it is to see a story about someone who has a similar set of experiences as you, and so for the Arab-American community, whether it’s the journal or the film fest or other events—staged plays and performances—it’s really about that. Seeing yourself reflected in all your complexity and reality is a really powerful experience.

For people outside, there is an understanding that the Arab world is not the monolith that people are fed. We hear about “the opinion of the Arab street” as though there is one opinion, or “the clash of civilizations” between Islam and the west, as though there is one Islam. There’s a real hunger to know the diversity behind that monolithic presentation, and that’s what stories and poems provide. You could say that about our other programming as well.

How do you think Mizna fits into the Twin Cities’ cultural scene?

We have great like-minded organizations that we have had great partnerships with over the years, including Pangea World Theater and the Loft Literary Center; we’ve partnered with them over the years to present poetry readings and spoken word performances. Then there’s the broader Asian-American community. It’s good to remember that the Middle East is in Asia, western Asia. It’s such a vibrant community—it’s great to be based in the Twin Cities. We have an international presence, but it’s great to be rooted in the Twin Cities because there’s such a love and support of art here. We really cherish that.

What neighborhood do you live in, and what are some of your favorite things to do around the Twin Cities?

I live in the Lyndale-Lake neighborhood, in Whittier. I’ve got a young family, so we’re very provincial in our little neck of the woods. We hit local parks, we eat breakfast at Common Roots, we go to films at the Lagoon, shop at The Wedge.

Has there been any one moment you specifically remember that made you glad that you do what you do?

We recently participated in an Asian Pacific Islander Association poetry and spoken word summit. It’s an every-other-year conference that happens in different locations, and this August it was in Minneapolis. It was during Ramadan, so we could help organizers provide accommodations for observant Muslims who were attending. Asia has many countries with Muslim populations, not just Arab countries, and many attendees reflected that. We had an Iftar dinner one night in honor of a writer who was at the conference, Joe Kadi. We were there to honor Joe, but a lot of people had been in Mizna and talked about the impact it had on their writing career. We heard from Sham-e-Ali Nayeem that Mizna was the first journal to publish her writing and pay a stipend for her work; that’s an important goal of ours, to tangibly support our artists. We realize it’s challenging for artists to make a living off their work, so whenever we can we provide stipends for our artists. She talked about how that was so meaningful for her, and really motivated her to realize that an artist could make a living at her art, that there are people to acknowledge the importance of her voice.